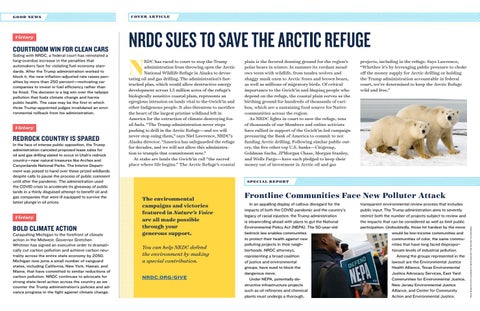 Siding with NRDC, a federal court has reinstated a long-overdue increase in the penalties that automakers face for violating fuel economy standards. After the Trump administration worked to block it, the new inflation-adjusted rate raises penalties by more than 250 percent—motivating car companies to invest in fuel efficiency rather than be fined. The decision is a big win over the tailpipe pollution that fuels climate change and harms public health. The case may be the first in which three Trump-appointed judges invalidated an environmental rollback from his administration.

In the face of intense public opposition, the Trump administration canceled proposed lease sales for oil and gas drilling slated to occur in Utah’s redrock country—near natural treasures like Arches and Canyonlands National Parks. The Interior Department was poised to hand over these prized wildlands despite calls to pause the process of public comment until after the pandemic. The administration used the COVID crisis to accelerate its giveaway of public lands in a thinly disguised attempt to benefit oil and gas companies that were ill equipped to survive the latest plunge in oil prices.

Catapulting Michigan to the forefront of climate action in the Midwest, Governor Gretchen Whitmer has signed an executive order to dramatically cut carbon pollution and achieve carbon neutrality across the en­­tire state economy by 2050. Michigan now joins a small number of vanguard states, in­­clud­ing California, New York, Hawaii, and Maine, that have committed to similar reductions of carbon pollution. NRDC continues to advocate for strong state-level action across the country as we counter the Trump administration’s policies and advance progress in the fight against climate change.

NRDC SUES TO SAVE THE ARCTIC REFUGE

RDC has raced to court to stop the Trump administration from throwing open the Arctic National Wildlife Refuge in Alaska to devastating oil and gas drilling. The administration’s fasttracked plan, which would allow destructive energy development across 1.5 million acres of the refuge’s biologically sensitive coastal plain, represents an egregious intrusion on lands vital to the Gwich’in and other Indigenous people. It also threatens to sacrifice the heart of the largest pristine wildland left in America for the extraction of climate-destroying fossil fuels. “The Trump administration never stops pushing to drill in the Arctic Refuge—and we will never stop suing them,” says Niel Lawrence, NRDC’s Alaska director. “America has safeguarded the refuge for decades, and we will not allow this administration to trample that commitment now.” At stake are lands the Gwich’in call “the sacred place where life begins.” The Arctic Refuge’s coastal

plain is the favored denning ground for the region’s polar bears in winter. In summer its verdant meadows teem with wildlife, from tundra wolves and shaggy musk oxen to Arctic foxes and brown bears, as well as millions of migratory birds. Of critical importance to the Gwich’in and Iñupiaq people who depend on the refuge, the coastal plain serves as the birthing ground for hundreds of thousands of caribou, which are a sustaining food source for Native communities across the region. As NRDC fights in court to save the refuge, tens of thousands of our Members and online activists have rallied in support of the Gwich’in-led campaign pressuring the Bank of America to commit to not funding Arctic drilling. Following similar public outcry, the five other top U.S. banks—Citigroup, Goldman Sachs, JPMorgan Chase, Morgan Stanley, and Wells Fargo—have each pledged to keep their money out of investment in Arctic oil and gas

projects, including in the refuge. Says Lawrence, “Whether it’s by leveraging public pressure to choke off the money supply for Arctic drilling or holding the Trump administration accountable in federal court, we’re determined to keep the Arctic Refuge wild and free.”

The environmental campaigns and victories featured in Nature’s Voice are all made possible through your generous support. You can help NRDC defend the environment by making a special contribution. NRDC.ORG/GIVE

Frontline Communities Face New Polluter Attack In an appalling display of callous disregard for the impacts of both the COVID pandemic and the country’s legacy of racial injustice, the Trump administration is steamrolling ahead with plans to gut the National Environmental Policy Act (NEPA). The 50-year-old bedrock law enables communities to protect their health against new polluting projects in their neighborhoods. NRDC attorneys, representing a broad coalition of justice and environmental groups, have sued to block the dangerous move. Under NEPA, potentially destructive infrastructure projects such as oil refineries and chemical plants must undergo a thorough, 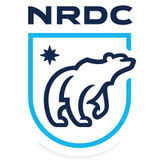