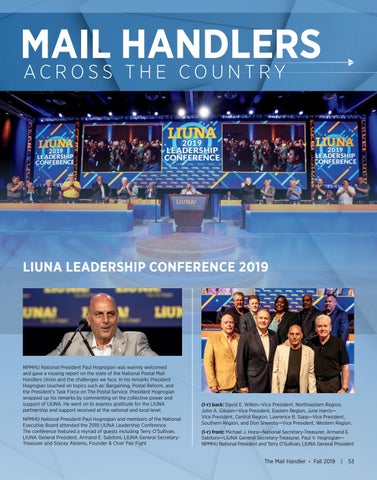 MAIL HANDLERS ACROSS THE COUNTRY

NPMHU National President Paul Hogrogian was warmly welcomed and gave a rousing report on the state of the National Postal Mail Handlers Union and the challenges we face. In his remarks President Hogrogian touched on topics such as: Bargaining, Postal Reform, and the President’s Task Force on The Postal Service. President Hogrogian wrapped up his remarks by commenting on the collective power and support of LIUNA. He went on to express gratitude for the LIUNA partnership and support received at the national and local level. NPMHU National President Paul Hogrogian and members of the National Executive Board attended the 2019 LIUNA Leadership Conference. The conference featured a myriad of guests including Terry O’Sullivan, LIUNA General President, Armand E. Sabitoni, LIUNA General SecretaryTreasurer and Stacey Abrams, Founder &amp; Chair Fair Fight