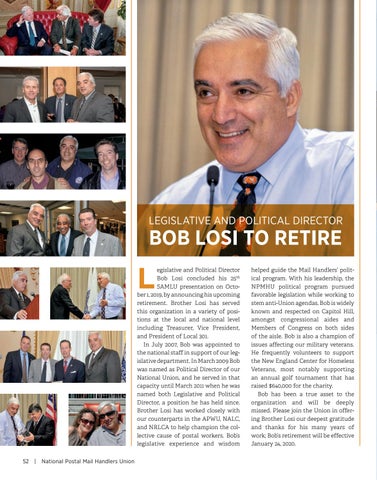 egislative and Political Director Bob Losi concluded his 25th SAMLU presentation on Octo­ ber 1, 2019, by announcing his upcoming retirement. Brother Losi has served this organization in a variety of positions at the local and national level including Treasurer, Vice President, and President of Local 301. In July 2007, Bob was appointed to the national staff in support of our legislative department. In March 2009 Bob was named as Political Director of our National Union, and he served in that capacity until March 2011 when he was named both Legislative and Political Director, a position he has held since. Brother Losi has worked closely with our counterparts in the APWU, NALC, and NRLCA to help champion the collective cause of postal workers. Bob’s legislative experience and wisdom 52 | National Postal Mail Handlers Union

helped guide the Mail Handlers’ political program. With his leadership, the NPMHU political program pursued favorable legislation while working to stem anti-Union agendas. Bob is widely known and respected on Capitol Hill, amongst congressional aides and Members of Congress on both sides of the aisle. Bob is also a champion of issues affecting our military veterans. He frequently volunteers to support the New England Center for Homeless Veterans, most notably supporting an annual golf tournament that has raised $640,000 for the charity. Bob has been a true asset to the organization and will be deeply missed. Please join the Union in offering Brother Losi our deepest gratitude and thanks for his many years of work; Bob’s retirement will be effective January 24, 2020.