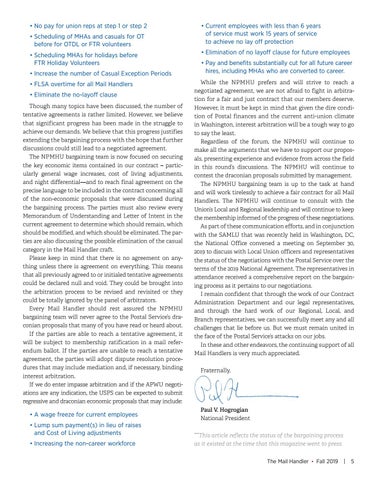 • Elimination of no layoff clause for future employees

• Pay and benefits substantially cut for all future career hires, including MHAs who are converted to career.

• Increase the number of Casual Exception Periods • FLSA overtime for all Mail Handlers • Eliminate the no-layoff clause Though many topics have been discussed, the number of tentative agreements is rather limited. However, we believe that significant progress has been made in the struggle to achieve our demands. We believe that this progress justifies extending the bargaining process with the hope that further discussions could still lead to a negotiated agreement. The NPMHU bargaining team is now focused on securing the key economic items contained in our contract – particularly general wage increases, cost of living adjustments, and night differential—and to reach final agreement on the precise language to be included in the contract concerning all of the non-economic proposals that were discussed during the bargaining process. The parties must also review every Memorandum of Understanding and Letter of Intent in the current agreement to determine which should remain, which should be modified, and which should be eliminated. The parties are also discussing the possible elimination of the casual category in the Mail Handler craft. Please keep in mind that there is no agreement on anything unless there is agreement on everything. This means that all previously agreed to or initialed tentative agreements could be declared null and void. They could be brought into the arbitration process to be revised and revisited or they could be totally ignored by the panel of arbitrators. Every Mail Handler should rest assured the NPMHU bargaining team will never agree to the Postal Service’s draconian proposals that many of you have read or heard about. If the parties are able to reach a tentative agreement, it will be subject to membership ratification in a mail referendum ballot. If the parties are unable to reach a tentative agreement, the parties will adopt dispute resolution procedures that may include mediation and, if necessary, binding interest arbitration. If we do enter impasse arbitration and if the APWU negotiations are any indication, the USPS can be expected to submit regressive and draconian economic proposals that may include:

While the NPMHU prefers and will strive to reach a negotiated agreement, we are not afraid to fight in arbitration for a fair and just contract that our members deserve. However, it must be kept in mind that given the dire condition of Postal finances and the current anti-union climate in Washington, interest arbitration will be a tough way to go to say the least. Regardless of the forum, the NPMHU will continue to make all the arguments that we have to support our proposals, presenting experience and evidence from across the field in this round’s discussions. The NPMHU will continue to contest the draconian proposals submitted by management. The NPMHU bargaining team is up to the task at hand and will work tirelessly to achieve a fair contract for all Mail Handlers. The NPMHU will continue to consult with the Union’s Local and Regional leadership and will continue to keep the membership informed of the progress of these negotiations. As part of these communication efforts, and in conjunction with the SAMLU that was recently held in Washington, DC, the National Office convened a meeting on September 30, 2019 to discuss with Local Union officers and representatives the status of the negotiations with the Postal Service over the terms of the 2019 National Agreement. The representatives in attendance received a comprehensive report on the bargaining process as it pertains to our negotiations. I remain confident that through the work of our Contract Administration Department and our legal representatives, and through the hard work of our Regional, Local, and Branch representatives, we can successfully meet any and all challenges that lie before us. But we must remain united in the face of the Postal Service’s attacks on our jobs. In these and other endeavors, the continuing support of all Mail Handlers is very much appreciated. Fraternally,

This article reflects the status of the bargaining process as it existed at the time that this magazine went to press.