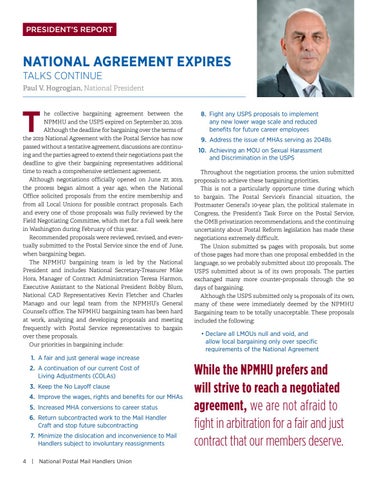 he collective bargaining agreement between the NPMHU and the USPS expired on September 20, 2019. Although the deadline for bargaining over the terms of the 2019 National Agreement with the Postal Service has now passed without a tentative agreement, discussions are continuing and the parties agreed to extend their negotiations past the deadline to give their bargaining representatives additional time to reach a comprehensive settlement agreement. Although negotiations officially opened on June 27, 2019, the process began almost a year ago, when the National Office solicited proposals from the entire membership and from all Local Unions for possible contract proposals. Each and every one of those proposals was fully reviewed by the Field Negotiating Committee, which met for a full week here in Washington during February of this year. Recommended proposals were reviewed, revised, and eventually submitted to the Postal Service since the end of June, when bargaining began. The NPMHU bargaining team is led by the National President and includes National Secretary-Treasurer Mike Hora, Manager of Contract Administration Teresa Harmon, Executive Assistant to the National President Bobby Blum, National CAD Representatives Kevin Fletcher and Charles Manago and our legal team from the NPMHU’s General Counsel’s office. The NPMHU bargaining team has been hard at work, analyzing and developing proposals and meeting frequently with Postal Service representatives to bargain over these proposals. Our priorities in bargaining include:

1. A fair and just general wage increase 2. A continuation of our current Cost of Living Adjustments (COLAs) 3. Keep the No Layoff clause 4. Improve the wages, rights and benefits for our MHAs 5. Increased MHA conversions to career status 6. Return subcontracted work to the Mail Handler Craft and stop future subcontracting 7. Minimize the dislocation and inconvenience to Mail Handlers subject to involuntary reassignments 4 | National Postal Mail Handlers Union

8. Fight any USPS proposals to implement any new lower wage scale and reduced benefits for future career employees 9. Address the issue of MHAs serving as 204Bs 10. Achieving an MOU on Sexual Harassment and Discrimination in the USPS Throughout the negotiation process, the union submitted proposals to achieve these bargaining priorities. This is not a particularly opportune time during which to bargain. The Postal Service’s financial situation, the Postmaster General’s 10-year plan, the political stalemate in Congress, the President’s Task Force on the Postal Service, the OMB privatization recommendations, and the continuing uncertainty about Postal Reform legislation has made these negotiations extremely difficult. The Union submitted 94 pages with proposals, but some of those pages had more than one proposal embedded in the language, so we probably submitted about 120 proposals. The USPS submitted about 14 of its own proposals. The parties exchanged many more counter-proposals through the 90 days of bargaining. Although the USPS submitted only 14 proposals of its own, many of these were immediately deemed by the NPMHU Bargaining team to be totally unacceptable. These proposals included the following:

• Declare all LMOUs null and void, and allow local bargaining only over specific requirements of the National Agreement

While the NPMHU prefers and will strive to reach a negotiated agreement, we are not afraid to fight in arbitration for a fair and just contract that our members deserve.