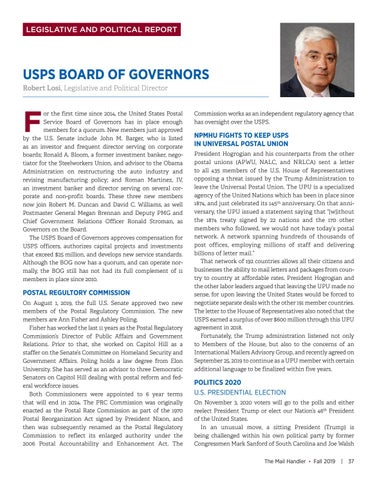 USPS BOARD OF GOVERNORS Robert Losi, Legislative and Political Director

or the first time since 2014, the United States Postal Service Board of Governors has in place enough members for a quorum. New members just approved by the U.S. Senate include John M. Barger, who is listed as an investor and frequent director serving on corporate boards; Ronald A. Bloom, a former investment banker, negotiator for the Steelworkers Union, and advisor to the Obama Administration on restructuring the auto industry and revising manufacturing policy; and Roman Martinez, IV, an investment banker and director serving on several corporate and non-profit boards. These three new members now join Robert M. Duncan and David C. Williams, as well Postmaster General Megan Brennan and Deputy PMG and Chief Government Relations Officer Ronald Stroman, as Governors on the Board. The USPS Board of Governors approves compensation for USPS officers, authorizes capital projects and investments that exceed $25 million, and develops new service standards. Although the BOG now has a quorum, and can operate normally, the BOG still has not had its full complement of 11 members in place since 2010.

POSTAL REGULTORY COMMISSION On August 1, 2019, the full U.S. Senate approved two new members of the Postal Regulatory Commission. The new members are Ann Fisher and Ashley Poling. Fisher has worked the last 11 years as the Postal Regulatory Commission’s Director of Public Affairs and Government Relations. Prior to that, she worked on Capitol Hill as a staffer on the Senate’s Committee on Homeland Security and Government Affairs. Poling holds a law degree from Elon University. She has served as an advisor to three Democratic Senators on Capitol Hill dealing with postal reform and federal workforce issues. Both Commissioners were appointed to 6 year terms that will end in 2024. The PRC Commission was originally enacted as the Postal Rate Commission as part of the 1970 Postal Reorganization Act signed by President Nixon, and then was subsequently renamed as the Postal Regulatory Commission to reflect its enlarged authority under the 2006 Postal Accountability and Enhancement Act. The

Commission works as an independent regulatory agency that has oversight over the USPS.

NPMHU FIGHTS TO KEEP USPS IN UNIVERSAL POSTAL UNION President Hogrogian and his counterparts from the other postal unions (APWU, NALC, and NRLCA) sent a letter to all 435 members of the U.S. House of Representatives opposing a threat issued by the Trump Administration to leave the Universal Postal Union. The UPU is a specialized agency of the United Nations which has been in place since 1874, and just celebrated its 145th anniversary. On that anniversary, the UPU issued a statement saying that “[w]ith­out the 1874 treaty signed by 22 nations and the 170 other members who followed, we would not have today’s postal network. A network spanning hundreds of thousands of post offices, employing millions of staff and delivering billions of letter mail.” That network of 192 countries allows all their citizens and businesses the ability to mail letters and packages from country to country at affordable rates. President Hogrogian and the other labor leaders argued that leaving the UPU made no sense, for upon leaving the United States would be forced to negotiate separate deals with the other 191 member countries. The letter to the House of Representatives also noted that the USPS earned a surplus of over $600 million through this UPU agreement in 2018. Fortunately, the Trump administration listened not only to Members of the House, but also to the concerns of an International Mailers Advisory Group, and recently agreed on September 25, 2019 to continue as a UPU member with certain additional language to be finalized within five years.

POLITICS 2020 U.S. PRESIDENTIAL ELECTION On November 3, 2020 voters will go to the polls and either reelect President Trump or elect our Nation’s 46th President of the United States. In an unusual move, a sitting President (Trump) is being challenged within his own political party by former Congressmen Mark Sanford of South Carolina and Joe Walsh The Mail Handler • Fall 2019 | 37