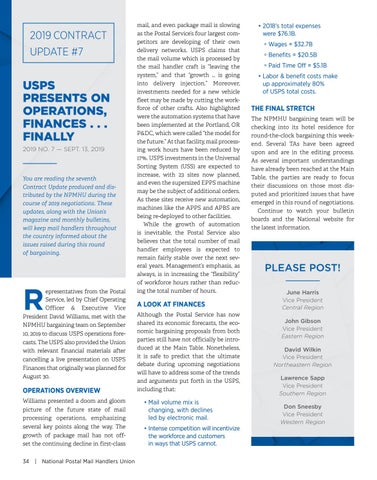 You are reading the seventh Contract Update produced and distributed by the NPMHU during the course of 2019 negotiations. These updates, along with the Union’s magazine and monthly bulletins, will keep mail handlers throughout the country informed about the issues raised during this round of bargaining.

President David Williams, met with the NPMHU bargaining team on September 10, 2019 to discuss USPS operations forecasts. The USPS also provided the Union with relevant financial materials after cancelling a live presentation on USPS Finances that originally was planned for August 30.

OPERATIONS OVERVIEW Williams presented a doom and gloom picture of the future state of mail processing operations, emphasizing several key points along the way. The growth of package mail has not offset the continuing decline in first-class 34 | National Postal Mail Handlers Union

mail, and even package mail is slowing as the Postal Service’s four largest competitors are developing of their own delivery networks. USPS claims that the mail volume which is processed by the mail handler craft is “leaving the system,” and that “growth … is going into delivery injection.” Moreover, investments needed for a new vehicle fleet may be made by cutting the workforce of other crafts. Also highlighted were the automation systems that have been implemented at the Portland, OR P&amp;DC, which were called “the model for the future.” At that facility, mail processing work hours have been reduced by 17%. USPS investments in the Universal Sorting System (USS) are expected to increase, with 23 sites now planned, and even the supersized EPPS machine may be the subject of additional orders. As these sites receive new automation, machines like the APPS and APBS are being re-deployed to other facilities. While the growth of automation is inevitable, the Postal Service also believes that the total number of mail handler employees is expected to remain fairly stable over the next several years. Management’s emphasis, as always, is in increasing the “flexibility” of workforce hours rather than reducing the total number of hours.

A LOOK AT FINANCES Although the Postal Service has now shared its economic forecasts, the economic bargaining proposals from both parties still have not officially be introduced at the Main Table. Nonetheless, it is safe to predict that the ultimate debate during upcoming negotiations will have to address some of the trends and arguments put forth in the USPS, including that:

• Mail volume mix is changing, with declines led by electronic mail. • Intense competition will incentivize the workforce and customers in ways that USPS cannot.

THE FINAL STRETCH The NPMHU bargaining team will be checking into its hotel residence for round-the-clock bargaining this weekend. Several TAs have been agreed upon and are in the editing process. As several important understandings have already been reached at the Main Table, the parties are ready to focus their discussions on those most disputed and prioritized issues that have emerged in this round of negotiations. Continue to watch your bulletin boards and the National website for the latest information.