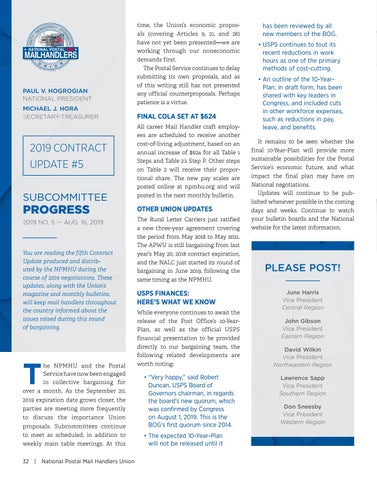 You are reading the fifth Contract Update produced and distributed by the NPMHU during the course of 2019 negotiations. These updates, along with the Union’s magazine and monthly bulletins, will keep mail handlers throughout the country informed about the issues raised during this round of bargaining.

over a month. As the September 20, 2019 expiration date grows closer, the parties are meeting more frequently to discuss the importance Union proposals. Subcommittees continue to meet as scheduled, in addition to weekly main table meetings. At this 32 | National Postal Mail Handlers Union

time, the Union’s economic proposals (covering Articles 9, 21, and 26) have not yet been presented—we are working through our noneconomic demands first. The Postal Service continues to delay submitting its own proposals, and as of this writing still has not presented any official counterproposals. Perhaps patience is a virtue.

has been reviewed by all new members of the BOG. • USPS continues to tout its recent reductions in work hours as one of the primary methods of cost-cutting. • An outline of the 10-YearPlan, in draft form, has been shared with key leaders in Congress, and included cuts in other workforce expenses, such as reductions in pay, leave, and benefits.

All career Mail Handler craft employees are scheduled to receive another cost-of-living adjustment, based on an annual increase of $624 for all Table 1 Steps and Table 2’s Step P. Other steps on Table 2 will receive their proportional share. The new pay scales are posted online at npmhu.org and will posted in the next monthly bulletin.

sustainable possibilities for the Postal

days and weeks. Continue to watch

The Rural Letter Carriers just ratified a new three-year agreement covering the period from May 2018 to May 2021. The APWU is still bargaining from last year’s May 20, 2018 contract expiration, and the NALC just started its round of bargaining in June 2019, following the same timing as the NPMHU.

USPS FINANCES: HERE’S WHAT WE KNOW While everyone continues to await the release of the Post Office’s 10-YearPlan, as well as the official USPS financial presentation to be provided directly to our bargaining team, the following related developments are worth noting:

• “Very happy,” said Robert Duncan, USPS Board of Governors chairman, in regards the board’s new quorum, which was confirmed by Congress on August 1, 2019. This is the BOG’s first quorum since 2014. • The expected 10-Year-Plan will not be released until it

It remains to be seen whether the final 10-Year-Plan will provide more Service’s economic future, and what impact the final plan may have on National negotiations. Updates will continue to be published whenever possible in the coming your bulletin boards and the National website for the latest information.