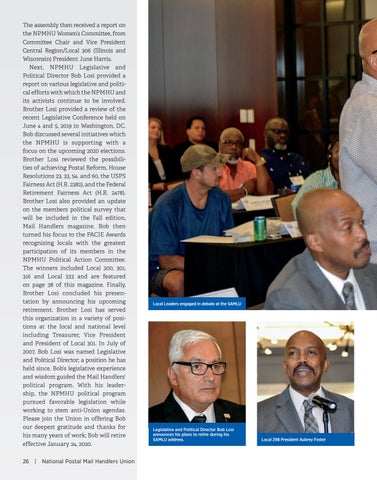 The assembly then received a report on the NPMHU Women’s Committee, from Committee Chair and Vice President Central Region/Local 306 (Illinois and Wisconsin) President June Harris. Next, NPMHU Legislative and Political Director Bob Losi provided a report on various legislative and political efforts with which the NPMHU and its activists continue to be involved. Brother Losi provided a review of the recent Legislative Conference held on June 4 and 5, 2019 in Washington, DC. Bob discussed several initiatives which the NPMHU is supporting with a focus on the upcoming 2020 elections. Brother Losi reviewed the possibilities of achieving Postal Reform, House Resolutions 23, 33, 54. and 60, the USPS Fairness Act (H.R. 2382), and the Federal Retirement Fairness Act (H.R. 2478). Brother Losi also provided an update on the members political survey that will be included in the Fall edition, Mail Handlers magazine. Bob then turned his focus to the PACIE Awards recognizing locals with the greatest participation of its members in the NPMHU Political Action Committee. The winners included Local 300, 301, 316 and Local 333 and are featured on page 38 of this magazine. Finally, Brother Losi concluded his presentation by announcing his upcoming retirement. Brother Losi has served this organization in a variety of positions at the local and national level including Treasurer, Vice President and President of Local 301. In July of 2007, Bob Losi was named Legislative and Political Director; a position he has held since. Bob’s legislative experience and wisdom guided the Mail Handlers’ political program. With his leadership, the NPMHU political program pursued favorable legislation while working to stem anti-Union agendas. Please join the Union in offering Bob our deepest gratitude and thanks for his many years of work; Bob will retire effective January 24, 2020. 26 | National Postal Mail Handlers Union

Local Leaders engaged in debate at the SAMLU

Legislative and Political Director Bob Losi announces his plans to retire during his SAMLU address.