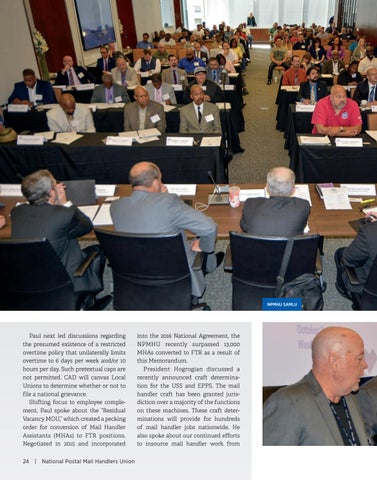 Paul next led discussions regarding the presumed existence of a restricted overtime policy that unilaterally limits overtime to 6 days per week and/or 10 hours per day. Such pretextual caps are not permitted. CAD will canvas Local Unions to determine whether or not to file a national grievance. Shifting focus to employee complement, Paul spoke about the “Residual Vacancy MOU,” which created a pecking order for conversion of Mail Handler Assistants (MHAs) to FTR positions. Negotiated in 2015 and incorporated 24 | National Postal Mail Handlers Union

into the 2016 National Agreement, the NPMHU recently surpassed 13,000 MHAs converted to FTR as a result of this Memorandum. President Hogrogian discussed a recently announced craft determination for the USS and EPPS. The mail handler craft has been granted jurisdiction over a majority of the functions on these machines. These craft determinations will provide for hundreds of mail handler jobs nationwide. He also spoke about our continued efforts to insource mail handler work from