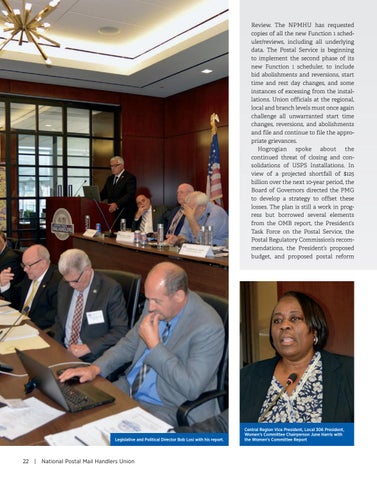 Review. The NPMHU has requested copies of all the new Function 1 scheduler/reviews, including all underlying data. The Postal Service is beginning to implement the second phase of its new Function 1 scheduler, to include bid abolishments and reversions, start time and rest day changes, and some instances of excessing from the installations. Union officials at the regional, local and branch levels must once again challenge all unwarranted start time changes, reversions, and abolishments and file and continue to file the appropriate grievances. Hogrogian spoke about the continued threat of closing and consolidations of USPS Installations. In view of a projected shortfall of $125 billion over the next 10-year period, the Board of Governors directed the PMG to develop a strategy to offset these losses. The plan is still a work in progress but borrowed several elements from the OMB report, the President’s Task Force on the Postal Service, the Postal Regulatory Commission’s recommendations, the President’s proposed budget, and proposed postal reform

Legislative and Political Director Bob Losi with his report.