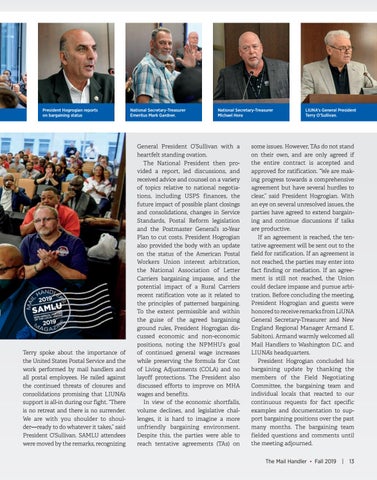 Terry spoke about the importance of the United States Postal Service and the work performed by mail handlers and all postal employees. He railed against the continued threats of closures and consolidations promising that LIUNA’s support is all-in during our fight. “There is no retreat and there is no surrender. We are with you shoulder to shoulder—ready to do whatever it takes,” said President O’Sullivan. SAMLU attendees were moved by the remarks, recognizing

General President O’Sullivan with a heartfelt standing ovation. The National President then provided a report, led discussions, and received advice and counsel on a variety of topics relative to national negotia­ tions, including USPS finances, the future impact of possible plant closings and consolidations, changes in Service Standards, Postal Reform legislation and the Postmaster General’s 10-Year Plan to cut costs. President Hogrogian also provided the body with an update on the status of the American Postal Workers Union interest arbitration, the National Association of Letter Carriers bargaining impasse, and the potential impact of a Rural Carriers recent ratification vote as it related to the principles of patterned bargaining. To the extent permissible and within the guise of the agreed bargaining ground rules, President Hogrogian discussed economic and non-economic positions, noting the NPMHU’s goal of continued general wage increases while preserving the formula for Cost of Living Adjustments (COLA) and no layoff protections. The President also discussed efforts to improve on MHA wages and benefits. In view of the economic shortfalls, volume declines, and legislative challenges, it is hard to imagine a more unfriendly bargaining environment. Despite this, the parties were able to reach tentative agreements (TAs) on

some issues. However, TAs do not stand on their own, and are only agreed if the entire contract is accepted and approved for ratification. “We are making progress towards a comprehensive agreement but have several hurdles to clear,” said President Hogrogian. With an eye on several unresolved issues, the parties have agreed to extend bargaining and continue discussions if talks are productive. If an agreement is reached, the tentative agreement will be sent out to the field for ratification. If an agreement is not reached, the parties may enter into fact finding or mediation. If an agreement is still not reached, the Union could declare impasse and pursue arbitration. Before concluding the meeting, President Hogrogian and guests were honored to receive remarks from LiUNA General Secretary-Treasurer and New England Regional Manager Armand E. Sabitoni. Armand warmly welcomed all Mail Handlers to Washington D.C. and LIUNA’s headquarters. President Hogrogian concluded his bargaining update by thanking the members of the Field Negotiating Committee, the bargaining team and individual locals that reacted to our continuous requests for fact specific examples and documentation to support bargaining positions over the past many months. The bargaining team fielded questions and comments until the meeting adjourned. The Mail Handler • Fall 2019 | 13