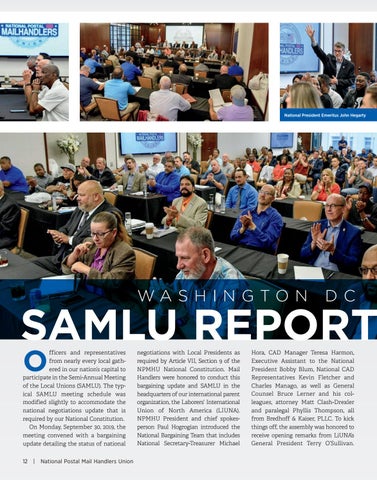 fficers and representatives from nearly every local gathered in our nation’s capital to participate in the Semi-Annual Meeting of the Local Unions (SAMLU). The typical SAMLU meeting schedule was modified slightly to accommodate the national negotiations update that is required by our National Constitution. On Monday, September 30, 2019, the meeting convened with a bargaining update detailing the status of national

negotiations with Local Presidents as required by Article VII, Section 9 of the NPMHU National Constitution. Mail Handlers were honored to conduct this bargaining update and SAMLU in the headquarters of our international parent organization, the Laborers’ International Union of North America (LIUNA). NPMHU President and chief spokesperson Paul Hogrogian introduced the National Bargaining Team that includes National Secretary-Treasurer Michael