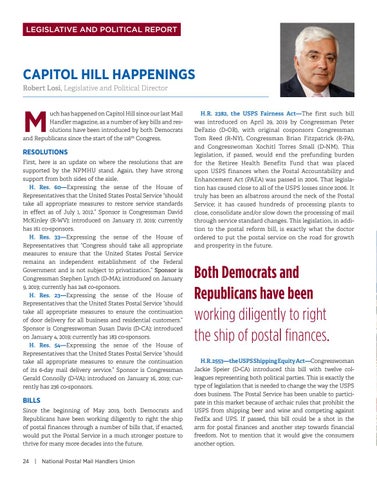 uch has happened on Capitol Hill since our last Mail Handler magazine, as a number of key bills and resolutions have been introduced by both Democrats and Republicans since the start of the 116th Congress.

BILLS Since the beginning of May 2019, both Democrats and Republicans have been working diligently to right the ship of postal finances through a number of bills that, if enacted, would put the Postal Service in a much stronger posture to thrive for many more decades into the future. 24 | National Postal Mail Handlers Union

H.R. 2382, the USPS Fairness Act—The first such bill was introduced on April 29, 2019 by Congressman Peter DeFazio (D-OR), with original cosponsors Congressman Tom Reed (R-NY), Congressman Brian Fitzpatrick (R-PA), and Congresswoman Xochitl Torres Small (D-NM). This legislation, if passed, would end the prefunding burden for the Retiree Health Benefits Fund that was placed upon USPS finances when the Postal Accountability and Enhancement Act (PAEA) was passed in 2006. That legislation has caused close to all of the USPS losses since 2006. It truly has been an albatross around the neck of the Postal Service; it has caused hundreds of processing plants to close, consolidate and/or slow down the processing of mail through service standard changes. This legislation, in addition to the postal reform bill, is exactly what the doctor ordered to put the postal service on the road for growth and prosperity in the future.

Both Democrats and Republicans have been working diligently to right the ship of postal finances. H.R. 2553—the USPS Shipping Equity Act—Congresswoman Jackie Speier (D-CA) introduced this bill with twelve colleagues representing both political parties. This is exactly the type of legislation that is needed to change the way the USPS does business. The Postal Service has been unable to participate in this market because of archaic rules that prohibit the USPS from shipping beer and wine and competing against FedEx and UPS. If passed, this bill could be a shot in the arm for postal finances and another step towards financial freedom. Not to mention that it would give the consumers another option.