Leipziger Notenspur – Leipzig Music Trail The Leipziger Notenspur Initiative Leipzig is home to an unusually high density of originally preserved homes and workplaces of renowned composers. Traces of composers like G. Ph. Telemann, J. S. Bach, A. Lortzing, F. Mendelssohn Bartholdy, R. Schumann, as well as R. Wagner, E. Grieg, L. Janáček, G. Mahler, M. Reger and E. Schulhoff can be encountered on the music routes of the Leipzig Notenspur. The Leipziger Notenspur Initiative provides opportunities to discover this musical and cultural heritage by combining an exploration of the city with a musical experience.

Additional Projects Two other projects – the Leipziger Notenrad (Music Ride) and the Leipziger Notenbogen (Music Walk) – are currently in development. More information is available on our website www.notenspur-leipzig.de and in the guidebook „Leipzig Music Trail“ published by Kamprad-Verlag.

Project Supporters of the City of Music The idea of the Leipziger Notenspur was created by Leipzig‘s citizens and has been actively supported by volunteers. A great number of Leipzig citizens have contributed to the multifaceted development of the project, by sharing their ideas and experience. The „Leipziger Notenspur“ project is supported by an expansive network wich includes music institutions, associations and individuals. Leipzig‘s higher educational institutions, Leipzig Tourism and Marketing GmbH and the city‘s municipality also contributed to the Notenspur project.

Notenspur for Children The Little Leipzig Music Trail („Kleine Leipziger Notenspur”) invites children to explore the city‘s music routes with the mascot Toni and a Notenspur Discovery Pass („Entdeckerpass”), which can be obtained at the Leipzig Tourist Information Office ( ) at Katharinenstraße 8.

Route and Audio Guide Systems The route is marked by stainless steel signs set in the pavement that show the way from station to station. Every Notenspur station has an information board. As music is best enjoyed through listening, Notenspur has developed small audio clips. You can listen to the audio samples and music examples via phone (local call). A Notenspur-app for smartphones and i-Phones is available for download.

The European Heritage Label The music of famous Leipzig composers and the houses in which they worked are heritage sites of world wide importance. Which is why in March 2018 the EU awarded the Leipziger Notenspur, and the nine Music heritage sites it represents and connects by acting as the ideal and actual connector, with the European Heritage Label. The nine music heritage sites mentioned above include: St. Thomas Church and the Thomas boys choir, St. Nicholas Church, the Old St. Nicholas School, the Bach-Archives at Bosehaus, the „Felix Mendelssohn Bartholdy” College for music and theater, Schumann House, Mendelssohn House, the C. F. Peters Publishing house and Grieg Memorial site, and the Gewandhaus Leipzig. Furthermore the project „European Notenspur” which was also part of the application is run by the Leipzig Notenspur. The „Notenspur” concept was created by the Leipziger Notenspur Initiative. The development of the route and audio guide systems of the Leipziger Notenspur was implemented by the City of Leipzig in cooperation with the Notenspur Leipzig e. V. and funded by the Free State of Saxony. Notenspur, Notenbogen and Notenrad are registered trademarks. Trademark owner: Notenspur Leipzig e. V., Copyright: Prof. Dr. Werner Schneider.

09 Wagner-Denkmal / Wagner Memorial Richard Wagner was born in Leipzig in 1813 (he died in Venice in 1883). He spent his childhood years in Dresden and came back to his hometown in 1827. He attended the Old St. Nicholas School between 1828 and 1830 and then studied music at the University of Leipzig. Some of his compositions were premiered in Leipzig. Georgiring, at the Swan Lake behind the Opera building.

10 Oper Leipzig / Leipzig Opera Today’s „Opernhaus” opened its doors in 1960 after the previous building was destroyed in World War II. Leipzig’s opera tradition goes back to the 17th century. Augustusplatz 12, 04109 Leipzig, Tel.: +49 341 1 26 10 For tour bookings visit our website at: www.oper-leipzig.de

Klanginstallation / Sound Installation Kretschmanns Hof: in the passage between the Katharinenand Hainstraße you can listen to the music and city sounds from three centuries by standing under the „sound shower”.

16 Hôtel de Saxe The concert hall of the former hotel used to be a place where guest virtuosos gave performances and a series of concerts in Leipzig. Mozart’s widow Constanze stayed over night here in 1796. Location: Klostergasse 9, 04109 Leipzig

20 Standort Altes Konservatorium / Site of the Old Conservatoire Here is where the first conservatoire in what is today Germany was opened following the initiative of Mendelssohn in 1843. Edvard Grieg is among the school&#96;s most prominent students. Atrium of the „Städtisches Kaufhaus“, Entrance via Universitätsstraße 16 or Neumarkt 9

21 Standort Erstes Gewandhaus / Site of the First Gewandhaus Location of the first Gewandhaus, the warehouse and residence of the cloth merchants. The Gewandhaus Orchestra – the oldest citizens’ concert orchestra in the world – performed here as of 1781. Universitätsstraße 16, Städtisches Kaufhaus, 04109 Leipzig

Leipziger Notenspur / Leipzig Music Trail Come explore the musical city of Leipzig on the Leipzig Music Trail! Nowhere else can you take a short walking tour and visit so many famous historical sites, where composers worked and lived in just under a few hours. The places waiting to be discovered include: › The churches where many of Johann Sebastian Bach’s works were premiered › The home and last residence of Felix Mendelssohn Bartholdy › The house in which Clara and Robert Schumann spent the first years of their marriage › The Museum of Musical Instruments containing the oldest piano in the world › St. Nicholas School attended by Richard Wagner › The coffee house where Robert Schumann and his „Davidsbündler“ (League of David) regularly met › The Old City Hall, the Gewandhaus, the Opera House and other sights of Leipzig Just follow the curved stainless steel signs in the pavements from one site to the next. Additionally, an audio guide provides you with audio clips and musical examples. These will transport you back in time and enable you to immerse yourself in the creative atmosphere of musical Leipzig throughout the centuries. The following symbols serve as a guide: please call the phone number next to this sign to hear the audio clips &lt;d&gt;&lt;e&gt; for corresponding audio clips in German and English for selected musical examples

for audio clips on the Little Leipzig Music Trail

The Mainfolder of the „Leipziger Notenspur“ with passenger guidance and station description. – Music moves the town. 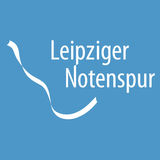