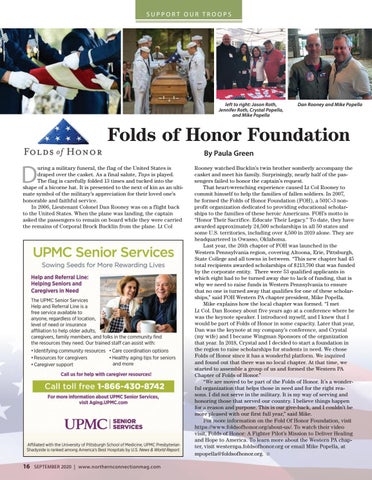 uring a military funeral, the flag of the United States is draped over the casket. As a final salute, Taps is played. The flag is carefully folded 13 times and tucked into the shape of a bicorne hat. It is presented to the next of kin as an ultimate symbol of the military’s appreciation for their loved one’s honorable and faithful service. In 2006, Lieutenant Colonel Dan Rooney was on a flight back to the United States. When the plane was landing, the captain asked the passengers to remain on board while they were carried the remains of Corporal Brock Bucklin from the plane. Lt Col

Rooney watched Bucklin’s twin brother somberly accompany the casket and meet his family. Surprisingly, nearly half of the passengers failed to honor the captain’s request. That heart-wrenching experience caused Lt Col Rooney to commit himself to help the families of fallen soldiers. In 2007, he formed the Folds of Honor Foundation (FOH), a 501C-3 nonprofit organization dedicated to providing educational scholarships to the families of these heroic Americans. FOH’s motto is “Honor Their Sacrifice. Educate Their Legacy.” To date, they have awarded approximately 24,500 scholarships in all 50 states and some U.S. territories, including over 4,500 in 2019 alone. They are headquartered in Owasso, Oklahoma. Last year, the 26th chapter of FOH was launched in the Western Pennsylvania region, covering Altoona, Erie, Pittsburgh, State College and all towns in between. “This new chapter had 45 total recipients awarded scholarships of $213,700 that was funded by the corporate entity. There were 53 qualified applicants in which eight had to be turned away due to lack of funding, that is why we need to raise funds in Western Pennsylvania to ensure that no one is turned away that qualifies for one of these scholarships,” said FOH Western PA chapter president, Mike Popella. Mike explains how the local chapter was formed. “I met Lt Col. Dan Rooney about five years ago at a conference where he was the keynote speaker. I introduced myself, and I knew that I would be part of Folds of Honor in some capacity. Later that year, Dan was the keynote at my company’s conference, and Crystal (my wife) and I became Wingman Sponsors of the organization that year. In 2018, Crystal and I decided to start a foundation in the region to raise scholarships for students in need. We chose Folds of Honor since it has a wonderful platform. We inquired and found out that there was no local chapter. At that time, we started to assemble a group of us and formed the Western PA Chapter of Folds of Honor.” “We are moved to be part of the Folds of Honor. It’s a wonderful organization that helps those in need and for the right reasons. I did not serve in the military. It is my way of serving and honoring those that served our country. I believe things happen for a reason and purpose. This is our give-back, and I couldn’t be more pleased with our first full year,” said Mike. For more information on the Fold Of Honor Foundation, visit https://www.foldsofhonor.org/about-us/. To watch their video visit, Folds of Honor: A Fighter Pilot’s Mission to Deliver Healing and Hope to America. To learn more about the Western PA chapter, visit westernpa.foldsofhonor.org or email Mike Popella, at mpopella@foldsofhonor.org. n 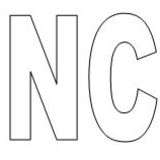