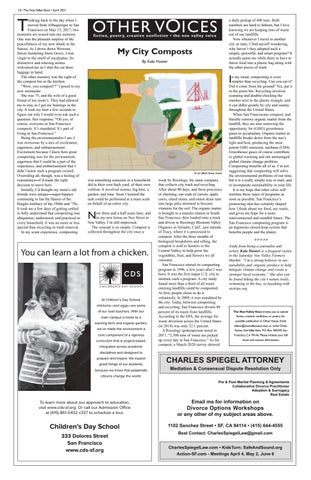 hinking back to the day when I moved from Albuquerque to San Francisco on May 15, 2017, two moments are seared into my memory. One was the pleasant surprise of the peacefulness of my new abode in the Sunset. As I drove down Wawona Street, bordering Stern Grove, I was virgin to the smell of eucalyptus. Its distinctive and relaxing aroma welcomed me as I shut the car door, luggage in hand. The other memory was the sight of the compost bin in the kitchen. “Wow, you compost!?” I posed to my new roommate. She was 75, and the wife of a good friend of my mom’s. They had allowed me to stay as I got my bearings in the city. It took my host a few seconds to figure out why I would even ask such a question. Her response: “Oh yes, of course, everyone in San Francisco composts. It’s mandated. It’s part of living in San Francisco.” Being the environmentalist I am, I was overcome by a mix of excitement, eagerness, and embarrassment. Excitement because I knew how great composting was for the environment, eagerness that I could be a part of the experience, and embarrassment that I didn’t know such a program existed. Overriding all, though, was a feeling of reassurance—I’d made the right decision to move here. Initially, I’d thought my mom’s old friends were unique—super-hippies continuing to fan the flames of the Haight-Ashbury of the 1960s and ’70s. It took me a few days of getting settled to fully understand that composting was ubiquitous, understood, and practiced in every household. It was no more or less special than recycling or trash removal. In my scant experience, composting

a daily pickup of 400 tons. Both numbers are hard to fathom, but I love knowing we are keeping tons of waste out of our landfills. Now whenever I travel to another city or state, I find myself wondering, why haven’t they adopted such a simple, powerful, and smart program? It actually pains me while there to have to throw food into a plastic bag along with the other pieces of trash.

My City Composts By Kala Hunter

n my mind, composting is even simpler than recycling. Can you eat it? Did it come from the ground? Yes, put it in the green bin. Recycling involves scanning and double-checking the number next to the plastic triangle, and it can differ greatly by city and county throughout the United States. When San Franciscans compost, and thereby remove organic matter from the landfill, they are also removing the opportunity for (GHG) greenhouse gases to accumulate. Organic matter in landfills breaks down from the sun’s light and heat, producing the most potent GHG emission, methane (CH4). Greenhouse gases of course contribute to global warming and our unmanaged global climate change problem. Composting benefits all of us. I’m not suggesting that composting will solve the environmental problems of our time, but it is a really simple way to start, and to incorporate sustainability in your life. It is my hope that other cities will institute these types of programs as soon as possible. San Francisco’s pioneering idea has certainly shaped how I think about my food, my waste, and gives me hope for a more interconnected and mindful future. The San Francisco composting program is an ingenious closed-loop system that benefits people and the planet.

was something someone or a household did in their own back yard, of their own volition. It involved worms, big bins, a garden, and time. Soon I learned the task could be performed at a mass scale on behalf of an entire city. ow three and a half years later, and in my new home on Noe Street in Noe Valley, I’m still impressed. The concept is so simple. Compost is collected throughout the city once a

You can learn a lot from a chicken.

At Children’s Day School, chickens—and eggs—are some of our best teachers. With our main campus a home to a working farm and organic garden, we’ve made the environment a core component of a rigorous curriculum that is project-based, integrated across academic

week by Recology, the same company that collects city trash and recycling. After about 90 days, and three processes of churning, our ends of carrots, apple cores, chard stems, and onion skins turn into large piles destined to become vitamins for the soil. The organic matter is brought to a transfer station in South San Francisco, then loaded onto a truck and driven to Recology Blossom Valley Organics in Vernalis, Calif., just outside of Tracy, where it is processed to compost. After the three months of biological breakdown and sifting, the compost is sold to farmers in the Central Valley, to help grow the vegetables, fruit, and flowers we all consume. San Francisco started its composting program in 1996, a few years after I was born. It was the first major U.S. city to institute such a program. A city study found more than a third of all waste entering landfills could be composted. At first, people chose to do it voluntarily. In 2009, it was mandated by the city. Today, between composting and recycling, San Francisco diverts 80 percent of its waste from landfills. According to the EPA, the average for waste diversion across the United States (in 2018) was only 32.1 percent. A Recology spokesperson noted in 2017, “2,300 tons of waste are picked up every day in San Francisco.” As for compost, a March 2020 survey showed

Aside from being a journalist and writer, Kala Hunter is a frequent visitor to the Saturday Noe Valley Farmers Market. “I’m a strong believer in sustainability and organic produce to help mitigate climate change and create a stronger local economy.” She also can be found hiking the city’s nature trails, swimming in the bay, or kayaking with etctrips.org.

disciplines and designed to prepare and inspire. We expect great things of our students, because we know that passionate

Email me for information on