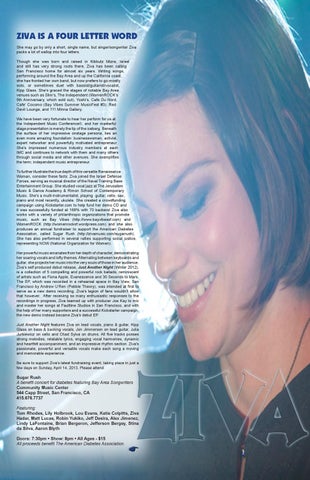 ZIVA IS A FOUR LETTER WORD She may go by only a short, single name, but singer/songwriter Ziva packs a lot of wallop into four letters. Though she was born and raised in Kibbutz Mizra, Israel and still has very strong roots there, Ziva has been calling San Francisco home for almost six years. Writing songs, performing around the Bay Area and up the California coast, she has fronted her own band, but now prefers to go mostly solo, or sometimes duet with bassist/guitarist/vocalist, Kipp Glass. She&#39;s graced the stages of notable Bay Area venues such as Slim&#39;s, The Independent (WomenROCK&#39;s 5th Anniversary, which sold out), Yoshi&#39;s, Cafe Du Nord, Cafe&#39; Cocomo (Bay Vibes Summer MusicFest #3), Red Devil Lounge, and 111 Minna Gallery. We have been very fortunate to hear her perform for us at the Independent Music Conference®, and her masterful stage presentation is merely the tip of the iceberg. Beneath the surface of her impressive onstage persona, lies an even more amazing foundation: businesswoman, activist, expert networker and powerfully motivated entrepreneur. She&#39;s impressed numerous industry members at each IMC and continues to network with them and many others through social media and other avenues. She exemplifies the term; independent music entrepreneur. To further illustrate the true depth of this versatile Renaissance Woman, consider these facts: Ziva joined the Israel Defense Forces, serving as musical director of the Naval Training Base Entertainment Group. She studied vocal jazz at The Jerusalem Music &amp; Dance Academy &amp; Rimon School of Contemporary Music. She&#39;s a multi-instrumentalist, playing guitar, cello, sax, piano and most recently, ukulele. She created a crowdfunding campaign using Kickstarter.com to help fund her demo CD and it was successfully funded at 168% with 70 backers! Ziva also works with a variety of philanthropic organizations that promote music, such as Bay Vibes (http://www.bayvibessf.com) and WomenROCK (http://womenrocksf.wordpress.com) and she also produces an annual fundraiser to support the American Diabetes Association, called Sugar Rush (http://zivamusic.com/sugarrush). She has also performed in several rallies supporting social justice, representing NOW (National Organization for Women). Her powerful music emanates from her depth of character, demonstrating her soaring vocals and lofty themes. Alternating between keyboards and guitar, she projects her music into the very souls of those in her audience. Ziva&#39;s self produced debut release, Just Another Night (Winter 2012), is a collection of 5 compelling and powerful rock ballads, reminiscent of artists such as Fiona Apple, Evanescence and 30 Seconds to Mars. The EP, which was recorded in a rehearsal space in Bay View, San Francisco by Andrew U&#39;Ren (Pebble Theory), was intended at first to serve as a new demo recording. Ziva&#39;s legion of fans wouldn&#39;t allow that however. After receiving so many enthusiastic responses to the recordings in progress, Ziva teamed up with producer Joe Kay to mix and master her songs at Faultline Studios in San Francisco, and with the help of her many supporters and a successful Kickstarter campaign, the new demo instead became Ziva&#39;s debut EP. Just Another Night features Ziva on lead vocals, piano &amp; guitar, Kipp Glass on bass &amp; backing vocals, Jon Jimmerson on lead guitar, Julia Jurkiewicz on cello and Chad Sylva on drums. All five tracks posses strong melodies, relatable lyrics, engaging vocal harmonies, dynamic and heartfelt accompaniment, and an impressive rhythm section. Ziva&#39;s passionate, powerful and versatile vocals make each song a moving and memorable experience. Be sure to support Ziva&#39;s latest fundraising event, taking place in just a few days on Sunday, April 14, 2013. Please attend: