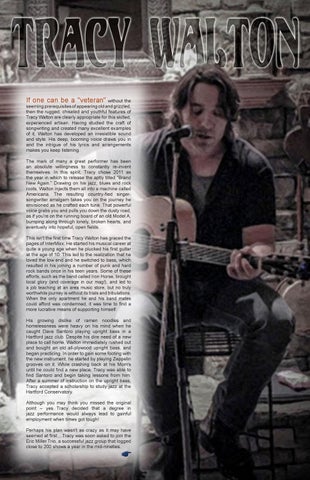 If one can be a "veteran" without the

seeming prerequisites of appearing old and grizzled, then the rugged, chiseled and youthful features of Tracy Walton are clearly appropriate for this skilled, experienced artisan. Having studied the craft of songwriting and created many excellent examples of it, Walton has developed an irresistible sound and style. His deep, booming voice draws you in and the intrigue of his lyrics and arrangements makes you keep listening. The mark of many a great performer has been an absolute willingness to constantly re-invent themselves. In this spirit, Tracy chose 2011 as the year in which to release the aptly titled "Brand New Again." Drawing on his jazz, blues and rock roots, Walton injects them all into a machine called Americana. The resulting country-fied singersongwriter amalgam takes you on the journey he envisioned as he crafted each tune. That powerful voice grabs you and pulls you down the dusty road, as if you're on the running board of an old Model A, bumping along through lonely, broken hearts, and eventually into hopeful, open fields. This isn't the first time Tracy Walton has graced the pages of InterMixx. He started his musical career at quite a young age when he plucked his first guitar at the age of 10. This led to the realization that he loved the low end and he switched to bass, which resulted in his joining a number of punk and hard rock bands once in his teen years. Some of these efforts, such as the band called Iron Horse, brought local glory (and coverage in our mag!), and led to a job teaching at an area music store, but no truly worthwhile journey is without its trials and tribulations. When the only apartment he and his band mates could afford was condemned, it was time to find a more lucrative means of supporting himself. His growing dislike of ramen noodles and homelessness were heavy on his mind when he caught Dave Santoro playing upright bass in a Hartford jazz club. Despite his dire need of a new place to call home, Walton immediately rushed out and bought an old all-plywood upright bass, and began practicing. In order to gain some footing with the new instrument, he started by playing Zeppelin grooves on it. While crashing back at his Mom's until he could find a new place, Tracy was able to find Santoro and begin taking lessons from him. After a summer of instruction on the upright bass, Tracy accepted a scholarship to study jazz at the Hartford Conservatory. Although you may think you missed the original point â&#x20AC;&#x201C; yes Tracy decided that a degree in jazz performance would always lead to gainful employment when times got tough! Perhaps his plan wasn't as crazy as it may have seemed at first... Tracy was soon asked to join the Eric Miller Trio, a successful jazz group that logged close to 200 shows a year in the mid-nineties.