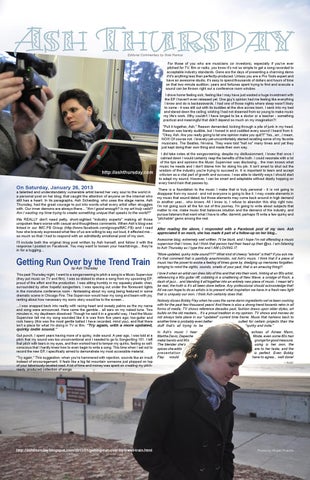 For those of you who are musicians (or investors), especially if you&#39;ve ever pitched for TV, film or radio, you know it&#39;s not so simple to get a song recorded to acceptable industry standards. Gone are the days of presenting a charming demo if it&#39;s anything less than perfectly-produced. Unless you are a Pro Tools expert and have an awesome studio, it&#39;s easy to spend thousands of dollars and hours of time on that two minute audition; years and fortunes spent trying to find and execute a sound can be thrown right out a conference room window. I drove home feeling sick; feeling like I may have just wasted a huge investment with the EP I haven&#39;t even released yet. One guy&#39;s opinion had me feeling like everything I know and do is backasswards. I had one of those nights where sleep wasn&#39;t likely to come - it was still out with its buddies at the dive across town. I sank into my bed and stared down the ceiling; wishing I had not dreamed from so young to make music my life&#39;s work. Why couldn&#39;t I have longed to be a doctor or a teacher - something practical and meaningful that didn&#39;t depend so much on my imagination?! &quot;Pull it together, Ash,&quot; Reason demanded, kicking through a pile of junk in my head. Reason was barely audible, but I honed in and coddled every sound I heard from it. &quot;Okay, Ash. Are you really going to let one opinion make you quit?!&quot; Yes...err...I mean, NO!!! Of course not. I bravely-yet-uncomfortably started recalling some of my favorite musicians. The Beatles. Nirvana. They were told &quot;hell no&quot; many times and yet they just kept doing their own thing and made their own way.

a talented and understandably vulnerable artist bared her very soul to the world in a personal post on her blog, that caught the attention of anyone on the internet who still has a heart. In its paragraphs, Ash Scheiding, who uses the stage name, Ash Thursday, had the great courage to put into words what every artist often struggles with. Our inner demons are always there... &quot;Am I good enough? Is my art truly valid? Am I wasting my time trying to create something unique that speaks to the world?&quot; We REALLY don&#39;t need petty, short-sighted &quot;industry experts&quot; making all those unspoken fears worse with casual and thoughtless comments. When Ash&#39;s blog was linked in our IMC.FB Group (http://www.facebook.com/groups/IMC.FB) and I read how she bravely expressed what few of us are willing to say out loud, it affected me... so much so that I had to respond with an admittedly emotional post of my own. I&#39;ll include both the original blog post written by Ash herself, and follow it with the response I posted on Facebook. You may want to loosen your heartstrings... they&#39;re in for a tugging...

Getting Run Over by the Trend Train by Ash Thursday

This past Thursday night, I went to a songscreening to pitch a song to a Music Supervisor (they put music on TV and film). I was so stoked to share a song from my upcoming EP; proud of the effort and the production. I was sitting humbly in my squeaky plastic chair, surrounded by other hopeful songwriters. I was spacing out under the florescent lights in the monotone conference room - fantasizing about my song being featured in some dramatic scene in Chicago Fire. The Supervisor would hear my song and beam with joy, ranting about how necessary my sonic story would be to the screen... ...I was snapped back into reality with racing heart and sweaty palms as the my name and song were announced. Here came the gamble... all ears on my naked tune. Two minutes in, my daydream dissolved: Though he said it in a graceful way, I had the Music Supervisor tell me my song sounded like it is was from five years ago; too-guitar and rock heavy (this was the most gentle ballad I have recorded, mind you), and that there isn&#39;t a place for what I&#39;m doing in TV or film. &quot;Try again, with a more updated, quirky indie sound.&quot; Gut punch. I spent years having more of a quirky, indie sound. A year ago, I was told at a pitch that my sound was too unconventional and I needed to go to Songwriting 101. I left that pitch with tears in my eyes, and then worked hard to temper my quirks; feeling so selfconscious that I hardly knew how to even begin to write a song. This time when I set out to record the new EP, I specifically aimed to demonstrate my most accessible material. &quot;Try again.&quot; This suggestion, when you&#39;re hammered with rejection, sounds like an insult instead of encouragement. It feels like a big fat mountain someone just plopped on top of your laboriously-leveled road. A lot of time and money was spent on creating my pitchready, produced collection of songs.

I did take notes at the songscreening; despite my disillusionment, I knew that once I calmed down I would certainly reap the benefits of the truth. I could resonate with a lot of the tips and opinions the Music Supervisor was disclosing... the man knows what music he needs and I don&#39;t blame him for doing his job. It isn&#39;t smart to shut out the wisdom of the industry you&#39;re trying to succeed in. It is important to learn and accept criticism as a vital part of growth and success. I was able to identify ways I should start to adapt my sound. However, I can be smart and adaptable without dizzily hopping on every trend train that passes by. There is a foundation to the music I make that is truly personal - it is not going to disappear from my sound - and not everyone is going to like it. I may create elements in my music that sound dated, but those elements may come back around in high demand in another year... who knows. All I know is, I refuse to abandon this ship right now. I&#39;m not going suck all the fun out of this journey. I&#39;m going to write about subjects that matter to me, make music that balances intuition and the demand of the industry, and pursue listeners that want what I have to offer, dammit; perhaps I&#39;ll write a few quirky and &quot;pitchable&quot; gems among the rest. --After reading the above, I responded with a Facebook post of my own. Ash appreciated it so much, she has made it part of a follow-up on her blog... Awesome blog, extremely well written. I&#39;ll be blunt, and I hope I&#39;m not offending a music supervisor that I know, but I think that person had their head up their @ss. I am listening to Ash Thursday as I type this and I AM LOVING IT. &quot;More updated, quirky indie sound???&quot; What kind of cheezy &quot;advice&quot; is that? If you ask me, it&#39;s that comment that is painfully anachronistic, not Ash&#39;s music. I think that if a piece of music has the power to evoke a feeling of times gone by, dredging up memories forgotten, bringing to mind the sights, sounds, smells of your past, that is an amazing thing!!! I love it when an artist can draw bits of this and that into their work, hinting at an 80s artist, referencing a 90s guitar riff, cobbling in a smattering of New Wave, a smidge of Rock, a dash of jazz... and blending it all together into an entirely new piece of music. I mean let&#39;s be real, the truth is it&#39;s all been done before. Any professional should acknowledge that! All we can hope to do as artists is to present what inspiration we have in a fresh new light that is uniquely our own. I think Ash certainly does that. Nobody disses Bobby Flay when he uses the same damn ingredients we&#39;ve been cooking with for the past few thousand years! And there is also a strong trend towards retro in all forms of media, TV shows reference decades past, fashion draws upon older styles, art builds on the old masters... It&#39;s a proud tradition in my opinion. TV shows and movies do not always take place in our &quot;updated&quot; current time frame. Music that harkens back to another time is probably even better suited for certain projects than the stuff that&#39;s all trying to be &quot;quirky and indie.&quot; In Ash&#39;s music I hear Martha Davis, Depeche metal bands and 90s The blender she&#39;s spices she adds presentation Flay would

echoes of Aimee Mann, Mode, even some 80s hair grunge for good measure. using is her own, the are to her taste, and the is perfect. Even Bobby have to agree... well done! - NoĂŤl