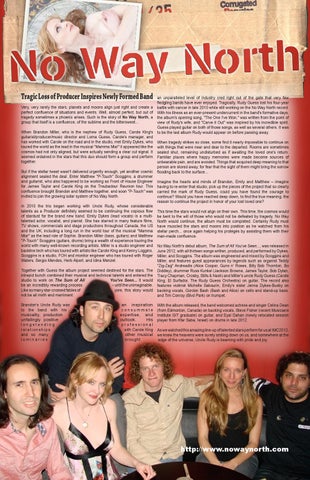 Tragic Loss of Producer Inspires Newly Formed Band Very, very rarely the stars, planets and moons align just right and create a perfect confluence of situations and events. Well, almost perfect, but out of tragedy sometimes a phoenix arises. Such is the story of No Way North, a group that itself is a confluence, of the sublime and the bittersweet... When Brandon Miller, who is the nephew of Rudy Guess, Carole King&#39;s guitarist/producer/music director and Lorna Guess, Carole&#39;s manager, and has worked with Carole on the road and in the studio, met Emily Dykes, who toured the world as the lead in the musical &quot;Mamma Mia!&quot; it appeared like the cosmos had not only aligned, but were actually sending a clear cut signal. It seemed ordained in the stars that this duo should form a group and perform together. But if the stellar tweet wasn&#39;t delivered urgently enough, yet another cosmic alignment sealed the deal. Enter Matthew &quot;P-Touch&quot; Scoggins, a drummer and guitarist, who also happened to be working as Front of House Engineer for James Taylor and Carole King on the Troubadour Reunion tour. This confluence brought Brandon and Matthew together, and soon &quot;P-Touch&quot; was invited to join the growing solar system of No Way North. In 2010 the trio began working with Uncle Rudy, whose considerable talents as a Producer definitely seemed to be continuing the copious flow of stardust for the brand new band. Emily Dykes (lead vocals) is a multitalented actor, vocalist, and pianist. She has starred in many feature films, TV shows, commercials and stage productions throughout Canada, the US and the UK, including a long run in the world tour of the musical &quot;Mamma Mia!&quot; as the lead role of Sophie. Brandon Miller (bass, guitars) and Matthew &quot;P-Touch&quot; Scoggins (guitars, drums) bring a wealth of experience touring the world with many well-known recording artists. Miller is a studio engineer and backline tech who has toured with artists like Carole King and Kenny Loggins. Scoggins is a studio, FOH and monitor engineer who has toured with Roger Waters, Sergio Mendes, Herb Alpert, and Idina Menzel. Together with Guess the album project seemed destined for the stars. The intrepid bunch combined their musical and technical talents and entered the studio to work on The Sum of All You&#39;ve Seen... It would be an incredibly rewarding process – until the unimaginable. Like so many star-crossed fables of yore, this story would not be all mirth and merriment. Brandon&#39;s Uncle Rudy was to the band with his musicality, production unfailingly positive longstanding relationships and so many luminaries

an inspiration consummate expertise, and outlook. His professional with Carole King other musical brought

an unparalleled level of industry cred right out of the gate that very few fledgling bands have ever enjoyed. Tragically, Rudy Guess lost his four-year battle with cancer in late 2010 while still working on the No Way North record. With his illness as an ever-present undercurrent in the band&#39;s formative days, the album&#39;s opening song, &quot;The One I&#39;ve Won,&quot; was written from the point of view of Rudy&#39;s wife, and &quot;Carve it Out&quot; was inspired by his incredible spirit. Guess played guitar on both of those songs, as well as several others. It was to be the last album Rudy would appear on before passing away. When tragedy strikes so close, some find it nearly impossible to continue on with things that were near and dear to the departed. Rooms are sometimes sealed shut, remaining undisturbed as if awaiting the loved one&#39;s return. Familiar places where happy memories were made become sources of unbearable pain, and are avoided. Things that acquired deep meaning to that person are stored away, for fear that the sight of them might bring the sorrow flooding back to the surface... Imagine the hearts and minds of Brandon, Emily and Matthew – imagine having to re-enter that studio, pick up the pieces of the project that so clearly carried the mark of Rudy Guess, could you have found the courage to continue? Would you have reached deep down, to find the true meaning, the reason to continue the project in honor of your lost loved one? This time the stars would not align on their own. This time, the cosmos would be bent to the will of those who would not be defeated by tragedy. No Way North would continue, the album must be completed. Certainly Rudy must have muscled the stars and moons into position as he watched from his stellar perch... once again helping his protégés by assisting them with their man-made confluence. No Way North&#39;s debut album, The Sum of All You&#39;ve Seen..., was released in June 2012, with all thirteen songs written, produced, and performed by Dykes, Miller, and Scoggins. The album was engineered and mixed by Scoggins and Miller, and features guest appearances by legends such as organist Teddy &quot;Zig-Zag&quot; Andreadis (Alice Cooper, Guns n&#39; Roses, Billy Bob Thornton, Bo Diddley), drummer Russ Kunkel (Jackson Browne, James Taylor, Bob Dylan, Tracy Chapman, Crosby, Stills &amp; Nash) and Miller&#39;s uncle Rudy Guess (Carole King, El Surfador, The Rudy Guess Orchestra) on guitar. The record also features violinist Michelle Sabourin, Emily&#39;s sister Jenna Dykes-Busby on backing vocals, Gordon Bash (Bash and Alice) on cello and stand-up bass, and Tim Conroy (Blvd Park) on trumpet.

With the album released, the band welcomed actress and singer Celina Dean (from Edmonton, Canada) on backing vocals, Steve Fisher (recent Musicians Institute GIT graduate) on guitar, and Eyal Dahan (newly relocated session player from Kfar Saba, Israel) on drums in late 2012. As we watched this amazing line-up of talented stars perform for us at IMC2012, we knew the heavens were surely smiling down on us, and somewhere at the edge of the universe, Uncle Rudy is beaming with pride and joy.