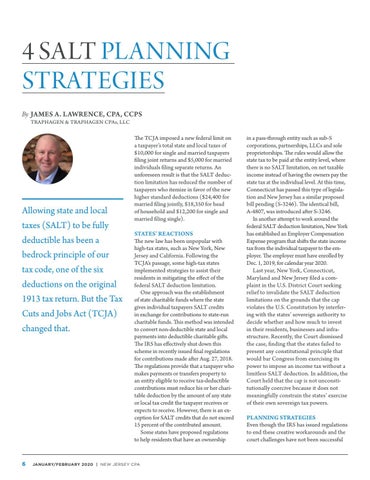 Allowing state and local taxes (SALT) to be fully deductible has been a bedrock principle of our tax code, one of the six deductions on the original 1913 tax return. But the Tax Cuts and Jobs Act (TCJA) changed that.

The TCJA imposed a new federal limit on a taxpayer’s total state and local taxes of $10,000 for single and married taxpayers filing joint returns and $5,000 for married individuals filing separate returns. An unforeseen result is that the SALT deduction limitation has reduced the number of taxpayers who itemize in favor of the new higher standard deductions ($24,400 for married filing jointly, $18,350 for head of household and $12,200 for single and married filing single). STATES’ REACTIONS The new law has been unpopular with high-tax states, such as New York, New Jersey and California. Following the TCJA’s passage, some high-tax states implemented strategies to assist their residents in mitigating the effect of the federal SALT deduction limitation. One approach was the establishment of state charitable funds where the state gives individual taxpayers SALT credits in exchange for contributions to state-run charitable funds. This method was intended to convert non-deductible state and local payments into deductible charitable gifts. The IRS has effectively shut down this scheme in recently issued final regulations for contributions made after Aug. 27, 2018. The regulations provide that a taxpayer who makes payments or transfers property to an entity eligible to receive tax-deductible contributions must reduce his or her charitable deduction by the amount of any state or local tax credit the taxpayer receives or expects to receive. However, there is an exception for SALT credits that do not exceed 15 percent of the contributed amount. Some states have proposed regulations to help residents that have an ownership

in a pass-through entity such as sub-S corporations, partnerships, LLCs and sole proprietorships. The rules would allow the state tax to be paid at the entity level, where there is no SALT limitation, on net taxable income instead of having the owners pay the state tax at the individual level. At this time, Connecticut has passed this type of legislation and New Jersey has a similar proposed bill pending (S-3246). The identical bill, A-4807, was introduced after S-3246. In another attempt to work around the federal SALT deduction limitation, New York has established an Employer Compensation Expense program that shifts the state income tax from the individual taxpayer to the employer. The employer must have enrolled by Dec. 1, 2019, for calendar year 2020. Last year, New York, Connecticut, Maryland and New Jersey filed a complaint in the U.S. District Court seeking relief to invalidate the SALT deduction limitations on the grounds that the cap violates the U.S. Constitution by interfering with the states’ sovereign authority to decide whether and how much to invest in their residents, businesses and infrastructure. Recently, the Court dismissed the case, finding that the states failed to present any constitutional principle that would bar Congress from exercising its power to impose an income tax without a limitless SALT deduction. In addition, the Court held that the cap is not unconstitutionally coercive because it does not meaningfully constrain the states’ exercise of their own sovereign tax powers. PLANNING STRATEGIES Even though the IRS has issued regulations to end these creative workarounds and the court challenges have not been successful 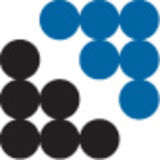