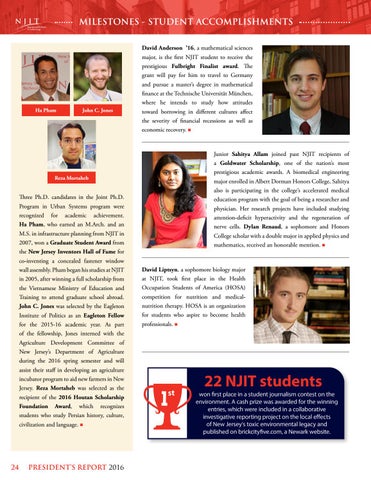 Three Ph.D. candidates in the Joint Ph.D. Program in Urban Systems program were recognized for academic achievement. Ha Pham, who earned an M.Arch. and an M.S. in infrastructure planning from NJIT in 2007, won a Graduate Student Award from the New Jersey Inventors Hall of Fame for co-inventing a concealed fastener window wall assembly. Pham began his studies at NJIT in 2005, after winning a full scholarship from the Vietnamese Ministry of Education and Training to attend graduate school abroad. John C. Jones was selected by the Eagleton Institute of Politics as an Eagleton Fellow for the 2015-16 academic year. As part of the fellowship, Jones interned with the Agriculture Development Committee of New Jersey’s Department of Agriculture during the 2016 spring semester and will assist their staff in developing an agriculture incubator program to aid new farmers in New Jersey. Reza Mortaheb was selected as the recipient of the 2016 Houtan Scholarship Foundation Award, which recognizes students who study Persian history, culture, civilization and language. n

David Anderson ’16, a mathematical sciences major, is the first NJIT student to receive the prestigious Fulbright Finalist award. The grant will pay for him to travel to Germany and pursue a master’s degree in mathematical finance at the Technische Universität München, where he intends to study how attitudes toward borrowing in different cultures affect the severity of financial recessions as well as economic recovery. n

Junior Sahitya Allam joined past NJIT recipients of a Goldwater Scholarship, one of the nation’s most prestigious academic awards. A biomedical engineering major enrolled in Albert Dorman Honors College, Sahitya also is participating in the college’s accelerated medical education program with the goal of being a researcher and physician. Her research projects have included studying attention-deficit hyperactivity and the regeneration of nerve cells. Dylan Renaud, a sophomore and Honors College scholar with a double major in applied physics and mathematics, received an honorable mention. n

David Liptsyn, a sophomore biology major at NJIT, took first place in the Health Occupation Students of America (HOSA) competition for nutrition and medicalnutrition therapy. HOSA is an organization for students who aspire to become health professionals. n 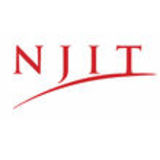