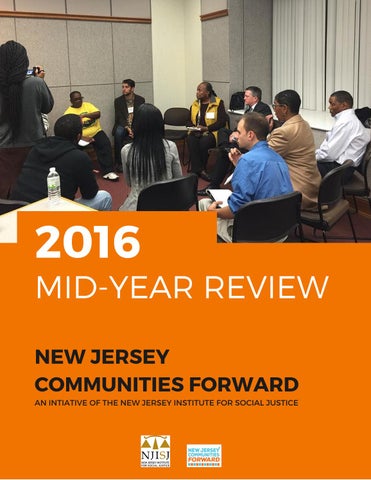 Beginning in December 2014, New Jersey Communities Forward (NJCF) partners including the NJ State Conference of the NAACP; the NJ Black Issues Conference (NJBIC); the National Organization of Black Law Enforcement Executives (NOBLE); the Integrated Justice Alliance (IJA); the Latino Action Network (LAN); Rutgers University; and the New Jersey Institute for Social Justice formed a coalition with the U.S. Attorneyâ&amp;#x20AC;&amp;#x2122;s Office for the District of New Jersey; the New Jersey Attorney Generalâ&amp;#x20AC;&amp;#x2122;s Office, and the New Jersey State Association of Chiefs of Police and committed to a new process of action and issue resolution. This report summarizes that work. NJCF 3 |

WHO WEÂ ARE New Jersey Communities Forward (NJCF) is an initiative within the New Jersey Institute for Social Justice (NJISJ) focused on issues of fair and effective law enforcement and economic opportunity primarily in urban communities. Our mission is to build safe, vibrant, and healthy urban communities in New Jersey. Established in 1999 by the Alan V. and Amy Lowenstein Foundation, NJISJ provides a dynamic and independent voice for change necessary to create just, vibrant and inclusive urban communities throughout the State of New Jersey. We are pleased to have been referred to as a â&amp;#x20AC;&amp;#x153;social justice think and do tank.â&amp;#x20AC;?

Our primary work consist of building bridges for communication between groups throughout New Jersey that have historically not spoken to each other or that have spoken often in anger and from ideologically divided camps. These conversations are not themselves an end, but are an important gateway towards a more durable set of relationships and community-based solutions. It is our hope that by bringing together community leaders and members, law enforcement, and business entities to solve problems, we will foster better relationships and move communities from dialogue to sustainable results. NJCF

Our long term goal is to build safe, vibrant and healthy urban communities in New Jersey. We collaborate with leadership teams to identify local issues; develop outreach strategies; host community empowerment forums; create action plans based on feedback from the forums; and implement changes in the community. The schematic below gives a quick sketch of the process.

The forums are the linchpin of our efforts. They serve to channel emotional energy into a positive space and create a framework for discussions in the identified issue areas, like the body camera policy and cultural competency training. The forums are tailored to the needs of each community but typically have four core components. The forums begin with a presentation of the issues by a community voice (for example, a representative from a community organization) or a policy expert. This presentation is typically followed by a response and consideration by law enforcement and businesses. After the responses, NJCF provides an opportunity for a short question and answer session. The forums conclude with breakout groups led by facilitators using written briefing materials. The briefing materials set out some challenging topics – e.g., police body cameras, efforts to focus on increasing employment opportunities in Newark - and come with guidelines to facilitate effective communication among all sides. All of the guidelines derive from these core principles: (i) each person has a voice and each voice should be heard and (ii) we must seek to understand before seeking to be understood. The sessions provide a basis for community members to develop local action plans and also have informed our discussions with administration officials and legislators about specific policy and legislative proposals. They have also yielded unanticipated collaborations between community actors. The theoretical and practical underpinnings for this process are to be found in the Community Visioning and Strategic Planning Handbook of the National Civic League 1, the deliberative democracy movement,2 The Neighborhood Project,3 Nudge4, The6Fifth Discipline 5and the experience of members of the NJ Advisory Committee on Policing Standards several of whom constitute the backbone of NJCF. ___________________________________

Our Accomplishments RegulationsÂ Our work has yielded notable local and statewide outcomes. In July 2015, the former acting Attorney General John Hoffman announced two significant policy changes after members of his staff attended the local forums and met with a coalition of leaders who have been working with NJCF. First, he provided new policy and practice guidance for investigations into police use of force. Second, he announced a statewide policy on body cams and provided significant funding to support the purchase of body cams by municipalities. More than 160 municipalities have accepted that funding and are preparing to purchase body cams. He also committed to equipping all troopers on patrol with body cams by the end of 2016. In making his announcements, AG Hoffman rightly credited NJCF for the caliber of its contribution to the effort. He also asked James Johnson to cochair an ongoing advisory committee to continue to examine the implementation of these two policies. No other state has adopted a policy as far reaching and many are looking to learn from the NJ experience. Indeed, at a meeting of more than 20 State Attorney Generals convened by the Department of Justice, AG Hoffman was asked how NJ was able to achieve such consensus. The NJCF approach is a big part of the answer to that question.

Making this idea concrete, last year, the NJ State Association of Chiefs of Police and the NAACP State Conference undertook two joint training efforts with the enthusiastic support of both NJCF and the Office of the Attorney General. The NAACP sponsored implicit bias training that more than 140 chiefs or their designees attended. In the weeks that followed, the chiefs hosted NAACP chapter presidents when they visited the police training academy and experienced training in the shootdonâ&amp;#x20AC;&amp;#x2122;t shoot simulator.

Training By bringing together community members, leaders, law enforcement, and businesses to solve problems relating to the specific and defined barriers to safer and economically sustainable communities, NJCF hopes to foster better community relations such that law enforcement moves from a mindset of control to one of collaborative engagement AND community members move from a posture of complaint or consumption to one of partnership.

OurÂ AccomplishmentsÂ Legislation A critical aspect of our work involves policy development and advocacy for criminal and economic justice reform. The ultimate goal is to create a fair and safe environment where every person has equal access to job opportunities and economic advancement. During the 2014-2015 New Jersey State Legislative Year, NJCF advocated for the following public safety policies during the legislative lame duck session: S2518/A3852 and S2399 -- Establishes statewide mandate for Body Worn Cameras S2718 -- Requires appointment of Special Prosecutor in police related shootings S2623 -- Establishes requirement for police recruitment and training and reporting for municipalities A4343/S2888 -- Creates mandate for cultural competency , diversity , and implicit bias for police A4850/S3282 -- Expands Police Training Commission membership to include representation from NOBLE S2623 and A4850/S3282 were approved by the full legislative body and sent to Governor Christie for signature. On January 19, 2016, Governor Christie signed S3282. One NOBLE member joined the State Police Training Commission. NJCF does not have an extensive policy making infrastructure. Beyond the resources of NJISJ, the NJCF team has called upon the resources of the Brennan Center for Justice at NYU Law School and the Criminal Justice Institute at Harvard Law School. Rutgers School of Criminal Justice is a core part of the effort and we maintain a regular liaison with the Community Affairs program within the Office of the Attorney General. We also maintain a linkage with the national group Law Enforcement Leaders for Reducing Crime and Incarceration through membership. Both Jiles Ship of NOBLE and Jim Johnson are members of that group and Jim Johnson serves on its steering committee.

We will continue to work on Policy Development. We expect to continue our work with the Office of the Attorney General and Legislators promoting criminal and economic justice reform. 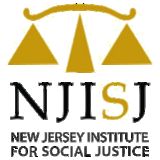