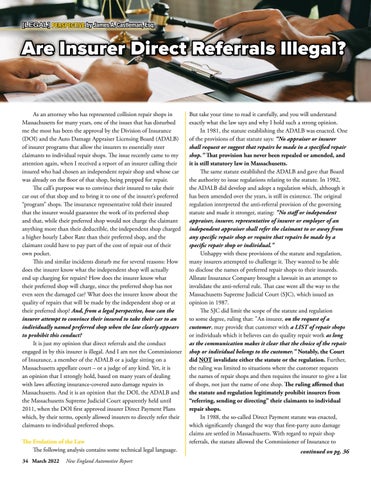 As an attorney who has represented collision repair shops in Massachusetts for many years, one of the issues that has disturbed me the most has been the approval by the Division of Insurance (DOI) and the Auto Damage Appraiser Licensing Board (ADALB) of insurer programs that allow the insurers to essentially steer claimants to individual repair shops. The issue recently came to my attention again, when I received a report of an insurer calling their insured who had chosen an independent repair shop and whose car was already on the floor of that shop, being prepped for repair. The call’s purpose was to convince their insured to take their car out of that shop and to bring it to one of the insurer’s preferred “program” shops. The insurance representative told their insured that the insurer would guarantee the work of its preferred shop and that, while their preferred shop would not charge the claimant anything more than their deductible, the independent shop charged a higher hourly Labor Rate than their preferred shop, and the claimant could have to pay part of the cost of repair out of their own pocket. This and similar incidents disturb me for several reasons: How does the insurer know what the independent shop will actually end up charging for repairs? How does the insurer know what their preferred shop will charge, since the preferred shop has not even seen the damaged car? What does the insurer know about the quality of repairs that will be made by the independent shop or at their preferred shop? And, from a legal perspective, how can the insurer attempt to convince their insured to take their car to an individually named preferred shop when the law clearly appears to prohibit this conduct? It is just my opinion that direct referrals and the conduct engaged in by this insurer is illegal. And I am not the Commissioner of Insurance, a member of the ADALB or a judge sitting on a Massachusetts appellate court – or a judge of any kind. Yet, it is an opinion that I strongly hold, based on many years of dealing with laws affecting insurance-covered auto damage repairs in Massachusetts. And it is an opinion that the DOI, the ADALB and the Massachusetts Supreme Judicial Court apparently held until 2011, when the DOI first approved insurer Direct Payment Plans which, by their terms, openly allowed insurers to directly refer their claimants to individual preferred shops. The Evolution of the Law The following analysis contains some technical legal language. 34 March 2022

But take your time to read it carefully, and you will understand exactly what the law says and why I hold such a strong opinion. In 1981, the statute establishing the ADALB was enacted. One of the provisions of that statute says: “No appraiser or insurer shall request or suggest that repairs be made in a specified repair shop.” That provision has never been repealed or amended, and it is still statutory law in Massachusetts. The same statute established the ADALB and gave that Board the authority to issue regulations relating to the statute. In 1982, the ADALB did develop and adopt a regulation which, although it has been amended over the years, is still in existence. The original regulation interpreted the anti-referral provision of the governing statute and made it stronger, stating: &quot;No staff or independent appraiser, insurer, representative of insurer or employer of an independent appraiser shall refer the claimant to or away from any specific repair shop or require that repairs be made by a specific repair shop or individual.&quot; Unhappy with these provisions of the statute and regulation, many insurers attempted to challenge it. They wanted to be able to disclose the names of preferred repair shops to their insureds. Allstate Insurance Company brought a lawsuit in an attempt to invalidate the anti-referral rule. That case went all the way to the Massachusetts Supreme Judicial Court (SJC), which issued an opinion in 1987. The SJC did limit the scope of the statute and regulation to some degree, ruling that: &quot;An insurer, on the request of a customer, may provide that customer with a LIST of repair shops or individuals which it believes can do quality repair work as long as the communication makes it clear that the choice of the repair shop or individual belongs to the customer.&quot; Notably, the Court did NOT invalidate either the statute or the regulation. Further, the ruling was limited to situations where the customer requests the names of repair shops and then requires the insurer to give a list of shops, not just the name of one shop. The ruling affirmed that the statute and regulation legitimately prohibit insurers from “referring, sending or directing” their claimants to individual repair shops. In 1988, the so-called Direct Payment statute was enacted, which significantly changed the way that first-party auto damage claims are settled in Massachusetts. With regard to repair shop referrals, the statute allowed the Commissioner of Insurance to continued on pg. 36 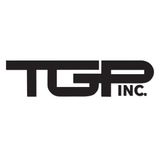 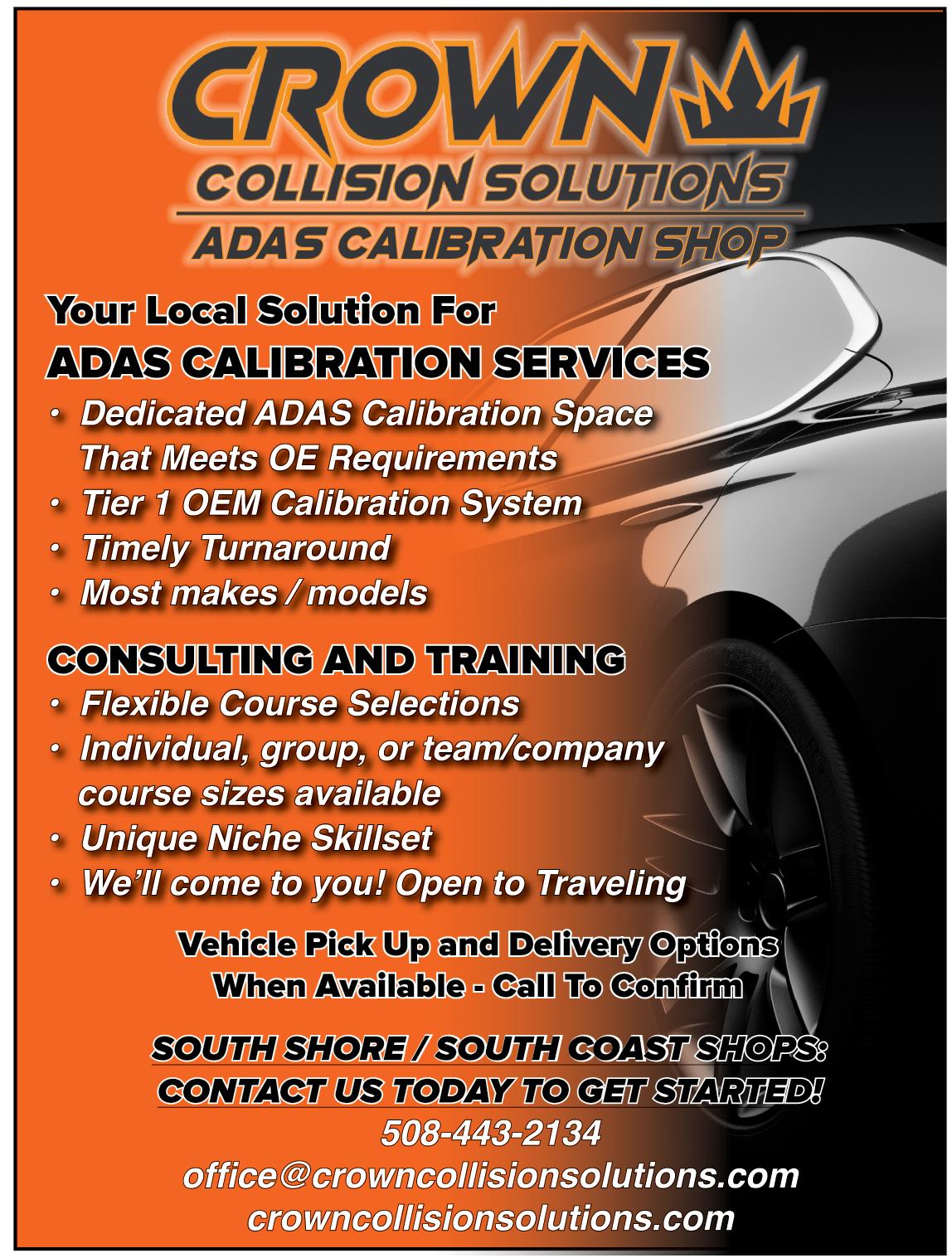 Opening Doors in 2022: AASP/MA Presents “Your Key to Success: Optimize Your Labor” 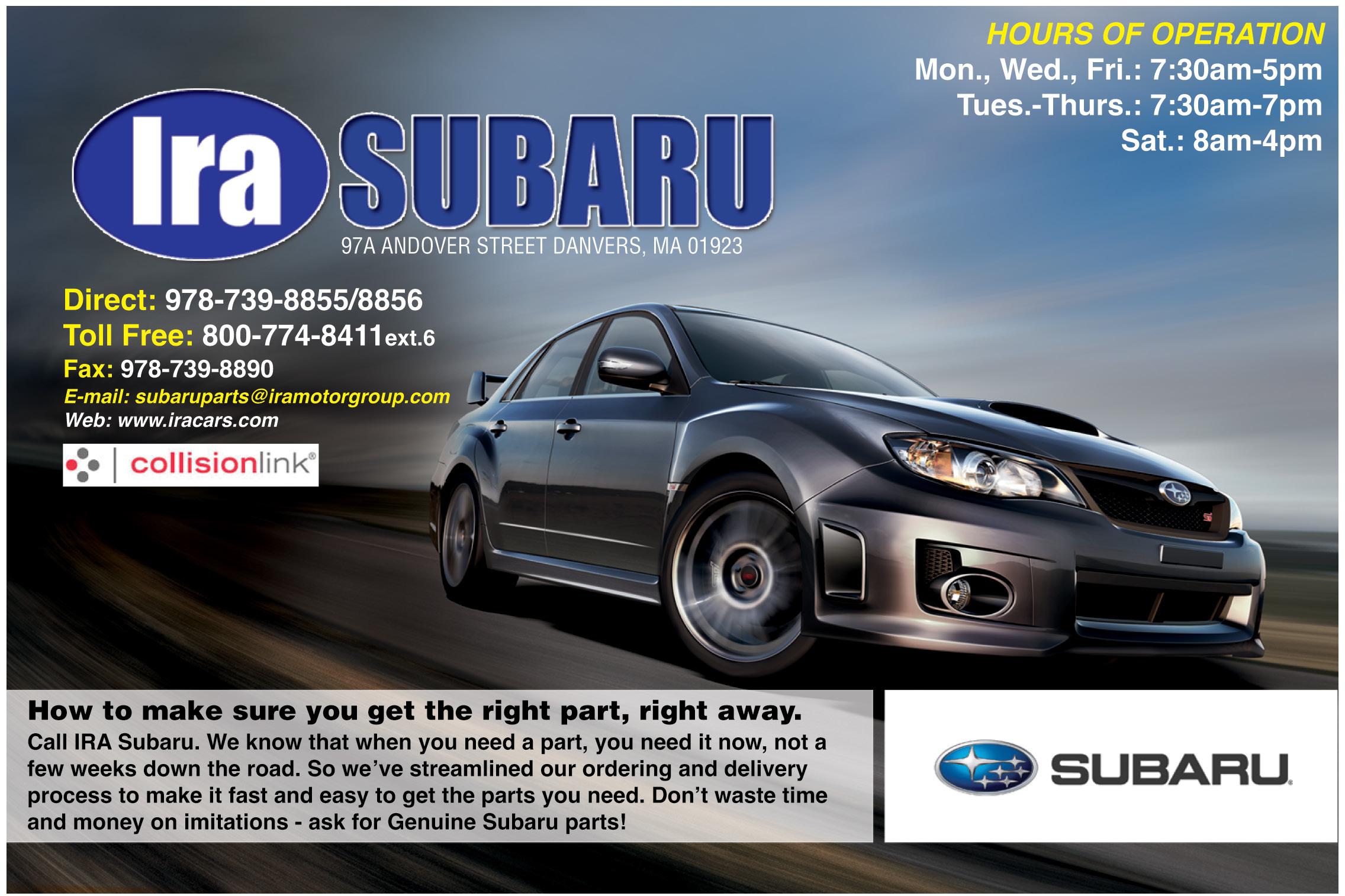 “Who Pays for What?” A Powerful Tool to Help Repairers Succeed