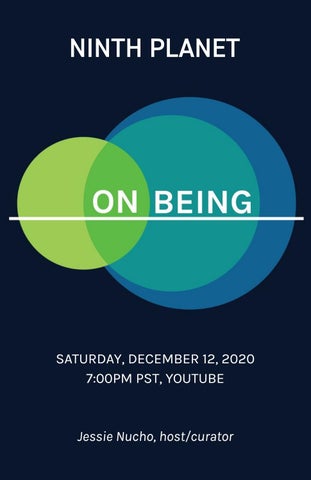 ABOUT NINTH PLANET Ninth Planet is a new music ensemble and service organization dedicated to the commissioning, performance, and furthering of new music, especially the works of young composers. Created in 2019 as a merger of Bay Area new music groups Wild Rumpus and Composers, Inc. Ninth Planet combines the resources of performers and composers of the music of our time. Its core ensemble is often supplemented by guest vocalists and instrumentalists to present a rich and wide-ranging repertoire. Ninth Planet hosts an annual call for scores as part of the internationally renowned Suzanne &amp; Lee Ettelson Composer&#39;s Award. More at www.ninthplanetmusic.org

ON BEING The music of On Being is an exploration of different facets of our existence, from the intersection of the physical and spiritual to existence in the present moment. Angélica Negrón’s La Isla Mágica and Darian Donovan Thomas’s Fluid emerge out of each composer’s relationship to a speciﬁc physical place, while Jessie Cox’s Spiritus invites the listener to an introspective meditation on breath and spirituality in the act of breathing. Form the Fabric, by inti ﬁggis-vizueta, reﬂects the reality of our current existence: despite physical separation across city lines and Wi-Fi connections, we are nevertheless able to connect with one another. Jessie Nucho, host/curator Andrew Lu, producer

ABOUT LA ISLA MÁGICA “La Isla Mágica” (The Magic Island) is a piece for solo double bass and pre-recorded electronics which explores possible connections between two islands that are close to my heart: Puerto Rico and Bali. The piece focuses on the joy of exploration and discovery with the intent of transporting the listener to an exotic location: a new hybrid imaginary island where the present moment is the only thing that’s signiﬁcant. (From New Music USA)

SPIRITUS Spiritus [Latin for &quot;breath&quot;] is about thinking through that word, which means thinking about breathing while also thinking about the spirituality in the act of breathing. In this sense it is not about transcendence or some spirit opposed to matter, but a being with breathing and re-appreciating that musical process. Breathing in, with and through a musical instrument, such as the ﬂute, shows how much music is in breathing, and also how breathing is an act, something we can do; and through that it is a source of power, it is wonder, movement, and so much more. (From the composer)

THE MUSIC FORM THE FABRIC Form the Fabric derives from NMAI archaeologist Ramiro Mato&#39;s phrase describing the cosmological understandings of the Incan &amp; Andean peoples through description of the Inca Road as &#39;threads interwoven to form the fabric of the physical and spiritual world. This work was made in New York City in January of 2020. (From the composer’s website)

FLUID “I composed Fluid while meditating on the idea of a body of water interacting with vastly different civilizations over millennia. The piece is explicitly about the Yanaguana river in San Antonio, Texas. The Payaya people gave the river its name, meaning “refreshing waters”. Later Spanish and French missionaries would use the river, and build a university around its origin (the “blue hole”). Later the river itself would become the hub of tourism and commerce in the city – no longer regarded as “refreshing”, but still beautiful and adorned by the best jewelry of markets and restaurants capitalism has to offer.” (From Landscape Music)

ANGÉLICA NEGRÓN LA ISLA MÁGICA Puerto Rican-born composer and multi-instrumentalist Angélica Negrón writes music for accordions, robotic instruments, toys and electronics as well as chamber ensembles and orchestras. Her music has been described as “wistfully idiosyncratic and contemplative” (WQXR/Q2) and “mesmerizing and affecting” (Feast of Music) while The New York Times noted her “capacity to surprise” and her “quirky approach to scoring”. Angélica has been commissioned by the Bang on a Can All-Stars, loadbang, MATA Festival, Brooklyn Youth Chorus, Sō Percussion, the American Composers Orchestra, and the New York Botanical Garden, among others. Her music has been performed at the Kennedy Center, the Ecstatic Music Festival, EMPAC, Bang on a Can Marathon and the 2016 New York Philharmonic Biennial and her ﬁlm scores have been heard numerous times at the Tribeca Film Festival. She has collaborated with artists like Sō Percussion, The Knights, Face the Music, and NOVUS NY, among others and is a founding member of the tropical electronic band Balún. Angélica holds a Master’s degree in music composition from New York University and pursued doctoral studies at The Graduate Center (CUNY) under the guidance of Tania León. She&#39;s a teaching artist for New York Philharmonic&#39;s Very Young Composers Program working with young learners on creative composition projects. Upcoming premieres include works for the LA Philharmonic, Dallas Symphony Orchestra and National Symphony Orchestra, San Francisco Girls Chorus, and NY Philharmonic Project 19 initiative. Negrón continues to perform and compose for ﬁlm. WEBSITE: https://www.angelicanegron.com/

inti ﬁggis-vizueta FORM THE FABRIC inti ﬁggis-vizueta (b. 1993) is a New York-based composer whose music focuses on combinations of various notational schemata, disparate and overlaid sonic plans, and collaborative unlearning of dominant vernaculars. She often writes magically real musics through the lens of personal identities, braiding a childhood of overlapping immigrant communities and Black-founded Freedom schools—in Chocolate City (DC)--with direct Andean &amp; Irish heritage and a deep connection to the land. Reviewers say her music constantly toes the line between &quot;all turbulence&quot; and &quot;quietly focused&quot; (National Sawdust Log), and “alternately smooth and serrated melodies” (The New York Times). inti is the recipient of the 2020 ASCAP Foundation Fred Ho Award. inti has been commissioned by JACK Quartet, Crash Ensemble, National Sawdust, Music from Copland House, The Phillips Collection, Jennifer Koh’s Arco Collaborative, and cellists Matt Haimovitz, Amanda Gookin, and Andrew Yee, among many others. Her music has been performed at the Kennedy Center, Walt Disney Concert Hall, the Ecstatic Music Festival, Spoleto Festival, Seattle Symphony’s Contemporary Music Marathon, and the New Latin Wave Festival. She has collaborated with artists such as Attacca Quartet, Spektral Quartet, Wild Up, Alarm Will Sound, Face the Music, and clarinetist Gleb Kanasevich as well as been featured by organizations such as the American Composer’s Orchestra, Kaleidoscope Chamber Orchestra, Montpelier Chamber Orchestra, the Institute for New Music, and Mizzou New Music. Her advocacy on access and education includes work with Luna Lab, Boulanger Initiative, New Music Gathering, and the International Contemporary Ensemble as well as articles for publications like American Composer’s Forum and Sound American. She curates for Score Follower, an online archive championing universal access to contemporary musics, with a focus on ﬁnding and featuring QTBIPOC artists. She gives regular lectures on her music, most recently at the Manhattan School of Music, UC Boulder, and American University. WEBSITE: https://www.inticomposes.com/

DARIAN DONOVAN THOMAS FLUID Composer, multi-instrumentalist, and interdisciplinary artist Darian Donovan Thomas was born in San Antonio, Texas and is currently based in Brooklyn, New York. He is interested in combining genres and mediums into a singular vocabulary that can express ideas about intersectionality (of medium and identity). Necessarily, he is interested in redacting all barriers to entry that have existed at the gates of any genre - this vocabulary of multiplicity will be intersectional, and therefore all-inclusive. Darian has been commissioned by YOSA (the Youth Orchestras of San Antonio), Bang on a Can’s summer festival Banglewood, percussionists at Bard College Conservatory, Sam Houston State University, among others. His music has been premiered by So Percussion, YOSA, Bang on a Can Banglewood Fellows, SoSI Fellows, and performed in Iceland, Switzerland, Canada, and all around the United States. On any given night you can ﬁnd Darian performing anywhere from a salon house show to a grungy basement to a bar/venue to a formal concert hall. As a means of exercising his interdisciplinary nature, Darian is currently performing with eight bands and ensembles in New York, as well as creating interdisciplinary work in different visual mediums. He has recently performed with Moses Sumney on the Late Show with Stephen Colbert, in a Tiny Desk concert with critically acclaimed dreambow band Balun, toured internationally to Iceland with Apartment Sessions, toured nationally and recorded with the Katie Martucci Band, is performing with MEDIAQUEER, Mordechai, String Orchestra of Brooklyn, Prompts Collective, and constantly performs his solo set in different venues around NYC. He has toured China, England, Wales, and has performed nationally with the Josh Abbott Band to audiences of thousands of people. Darian received his Bachelors in Music Composition from The University of the Incarnate Word (2016) in San Antonio, Texas. He has since been a New Amsterdam Records Composer Lab Fellow (2018), So Percussion Summer Institute (SoSI) Composer Fellow (2018), Inﬁnite Palette composer performer for Aeon Ritual at MASSMoCA (2019), and a Bang on a can Summer Institute “Banglewood” Composer Fellow (2019). He has studied with Julia Wolfe, David Lang, Michael Gordon, Sarah Kirkland Snider, William Brittelle, Andrea Mazzariello, Troy Peters, amongst others.

JESSIE NUCHO HOST/CURATOR San Francisco-based ďŹ&amp;#x201A;utist Jessie Nucho is passionate about sharing both traditional and contemporary music as a chamber musician, soloist, and educator. Jessie enjoys collaborations with musicians throughout the country, often premiering new works by emerging composers. In addition to regularly performing with Ninth Planet (formerly Wild Rumpus) and Ensemble Mik Nawooj. Jessie has recently performed with Frequency 49 and the Fog City Guitar Duo. As a soloist, she has performed at San Franciscoâ&amp;#x20AC;&amp;#x2122;s Center for New Music, the Berkeley Arts Festival, the Hot Air Music Festival, and the Legion of Honor as well as appearing as a guest soloist with the Carnegie Mellon University Baroque Ensemble and the San Francisco Conservatory of Music Percussion Ensemble. Jessie holds an MM from the San Francisco Conservatory of Music, where she studied with Tim Day. Previous instructors include Alberto Almarza and Jeanne Baxtresser.

ON GIVING Putting this program together has been an incredible labor of love, and I couldn’t be more excited to share it with you and the world. I’m excited about this concert because I believe it shows what Ninth Planet is all about: close collaborations between performers and composers, the advancement of new music, and overcoming challenges. This concert is free to all to access thanks to the generosity and support of patrons like you. Giving to an arts organization doesn’t require you to be a billionaire philanthropist. In fact, most of our supporters are grassroots donors, each contributing a mighty $9. Those many, many $9 donations grow to something much more. It goes directly to supporting performers, composers, and furthering Ninth Planet’s mission as a new music service organization. Make a difference today by donating on our website: www.ninthplanetmusic.org/support.html Thank you so much for your continued support– I hope you enjoy the concert! Sincerely,

Official program for ON BEING, presented by Ninth Planet. The music of On Being is an exploration of different facets of our existence, from the intersection of the physical and spiritual to existence in the present moment. Angélica Negrón’s La Isla Mágica and Darian Donovan Thomas’s Fluid emerge out of each composer’s relationship to a specific physical place, while Jessie Cox’s Spiritus invites the listener to an introspective meditation on breath and spirituality in the act of breathing. Form the Fabric, by inti figgis-vizueta, reflects the reality of our current existence: despite physical separation across city lines and wi-fi connections, we are nevertheless able to connect with one another. 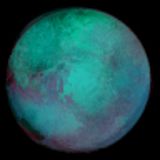