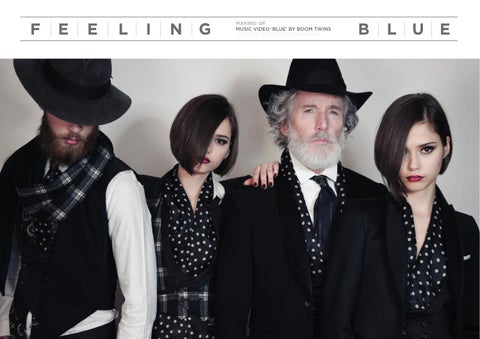 ALL CONTENT WRITTEN BY NIKITA ANDRIANOVA, UNLESS OTHERWISE STATED.

There are those unique moments when inspiration strikes you with an idea so vibrant that it sets fire to your mind and becomes impossible to forget. The moment I heard the Bloom Twins perform a cappella at Ellen von Unwerth’s 60th birthday dinner, I knew there was something truly mesmerizing about their performance and vivacy that gave me goosebumps, while their music and emotion touched me in an astonishing way. In a world where every music act and performance seems strategic and overplanned, the twins sisters have something to offer that seems to be so refreshingly pure and natural, that it takes the audience’s breath away. The image of a modernized, elegant 21st century Lolita sprang to my mind, with lined saucer eyes, ombre red lips, dressed in a way that subtly oozes sexappeal, without fullfilling any classic feminine clichés or showing too much skin. How thrilling would it be to play with the controversy of their youthful Yet strikingly sensual complexion in combination with a mature, much senior man? And which possibilities are there to create a storyline that would visualize his attraction with subtlety and sophistication?

concept / storyline the music video challenges the spectator by providing just enough controversy to generate curiosity and excitement, complete with a power to subvert, to imagine and to deceive. based on a bittersweet memory of a dysfunctional relationship, the female protagonist (played by both anna &amp; Sonia otherwise referred to as bloom twins) is remembering moments with a two-faced lover: On the one hand she recalls him as the mature, masculine, elegant, caring yet mysterious character (aiden shaw), on the other hand yearns for his wild, reckless, exciting and charming side (BILLY HUXLEY). The female protagonist is torn between what she remembers and her personal regrets and nostalgia. affectionate reminiscence meets sadness and regret, while she is replaying a variety of moments, subconsciously questioning whether her mind is playing a trick on her. visually, key inspiration is the controversial ‘lolita’ movie in combination with the sophisticated aesthethics of ‘mad men’. the fascination with the young, innocent, nonetheless seductive features of the twin sisters (bloom twins) in contrast to a very masculine, elegant and mature (aiden shaw). to add an unpredictable twist, a younger, tattooed character (BILLY HUXLEY) appears in scenes, leaving the audience guessing if he could be the young representation of the first male character or is actually just a different facet of the same person. slow motion scenes are built into the plot to emphasise the beauty of detail of the interaction between the characters. the fact that the girls are twins adds an element of surprise, consciously utilizing mirrors and reflections at the location to play with the aspects of deception.

Having seen a lot of Aiden Shawâ&amp;#x20AC;&amp;#x2DC;s previous work, his masculine features, graceful attitude and poise in addition to great acting skills made me very keen to get him involved in this project FROM THE START. THE SAME WEEK I WAS LUCKY ENOUGH TO RUN into Billy Huxley AND NOTiCED certain similarities alongside exceptionally exciting differences between the two gentlemen when dressed in A similar manner. IN RETROSPECT, Billy BROUGHT A WILD SpIRit INto the character AND HIS tattooes were perfect TO ADD another effect of surprise to the video. HE IMPRESSED WITH THE INTENSITY AND PASSION HE COULD PERFORM ON CAMERA. BOTH BILLY AND AIDEN HAVE AN ADMIRABLY POSITIVE ENERGY AND ARE A JOY TO WORK WITH. i am very grateful for their time and dedication.

BLOOM TWINS ‘BLUE’ what was the inspiration for ‘blue? something a lot of people can relate to: the feeling of loneliness in a big city. when everything around you is buzzing, time passes quickly when YOU ARE CLINGING ON TO THE MEMORY OF MOMENTS YOU’ve spent with someone. a deeply rooted sadness of a relationship lost, maybe because the parter has moved on. the nostalgia and reminiscence of a dysfunctional relationship overcomes you while you are walking on empty london streets, wondering if your mind is playing a trick on you. what can we expect to hear on your upcoming ep? what overall mood does it have? it will be honest. it will be real. it will be sensual. it will represent us in a soft, dark yet emotional way. which direction do you see your music going? anybody you would like to perform / work with? The world is full of incredible talent, therefore there are a lot of artists we would love to collaborate with. if we have to give you a name, it would be someone like thom york. it would be great to work with him one day. most important to us is to provide our listeners with an intense experience to be able to touch their hearts and connect with them.

the two gentlemen who made this music video shoot an unforgettable experience. the hard work, time and motivation they have put into this project has left me speechless. I am so grateful that they shared their knowledge and expertise as well as experience with me and taught me a lot in the process. this has truly proven to me that when you treat each other with respect and care, collaborating with the right people can truly make magic happen.

A DP with an impeccable eye for camera angles who has given me advice on how to visualize my ideas the best way. it was my first time working with him, but I certainly hope not the last time. the communication between greg, oz, ish and jake was exceptional. quick thinking and strong mindset is what made this a successful team.

from finding and arranging a range of unique set design props, to helping me organize things in addition to being the assembly editor, jake has been on point and driven to make the best out of every situation. motivation and dedication at its best.

EDITOR ANAĂ?S BIMPEL her calm and concentrated attitude towards work is exceptional. taking on notes and incorporating them with her own ideas quickly and always making time even in stressful timeframes. she was one of the key ingridients to take a beautiful piece of footage and yet create something truly special and touching. the edit she has created showcases her talent beautifully, i am very glad she was part of the team.

washing hands scene upstairs bathroom, red sink aiden has his head down, wearing a hat, looking serious. camera moves to the hands in the sink (which are billy’s), camera goes back up, billy looks up adjusts tie, confidently yet casually walks out of the room.

SPECIAL THANKS IAN BONHôTE at this point a special thank you goes out to ian, an inspiring director at pulse films, who kindly provided us with the location to shoot the music video at. the stunning unfurnished apartment was perfect breeding ground for new ideas and infused me with inspiration.

creating a connection BLOOM TWINS ANNA AND SONIA KUPRIENKO ON THE EXPERIECE OF WORKING WITH AIDEN AND BILLY we absolutely loved working with BOTH AIDEN AND BILLY. There isn’t anyone who WOULD HAVE beEN better SUITED for their roles. They are very different. Billy is young and wild, like an animal with the eyes of a wolf, wheREAS Aiden is a very mature and gracious man, who YET STILL HAS A wild SIDE TO HIM. It was the first time we haVE FILMED THIS INTIMATELY with MALE CHARACTERS so it WAS certainly a very special EXPERIENCE for us.

INTERACTION BETWEEN THE CAST

HAIR STYLING KEVIN LUCHMUN WITH TWO BEARDED GENTLEMEN cast as the male protagonists, it was crucial to have the right hair stylist involved and there is truly no one better suited for the role as menâ&amp;#x20AC;&amp;#x2122;s hair dresser of the year award winner kevin luchmun. not only is he an absolute genious when it comes to menâ&amp;#x20AC;&amp;#x2122;s hair styling and grooming but also a very hard-working, positive and energetic professional to work with.

MAKE UP ARTISTRY JULIA LAZA for this shoot i was very particular about the make up as the aim was to create the idea of a modern lolita. therefore the key was to remain classic but to give it an exciting twist. very fortunately, we happened to have the talented julia laza on board as the make up artist, who created this feminine, elegant yet very original make up look. the brown eyeshadow and lashes accentuate the large bambi eyes and the ombre effect on the lips adds character to the classic cherry red lipstick. as the official bloom twins make up artist, julia knows exactly how to make the girls look on point in no time. she was part of the team during both video shoots and i am very grateful to have had her involved in the project.

THE SMALLEST DETAILS CAN make such a huge difference and this wonderful duo has proven that point. the ombre semi-permanent nails that liane created were in so many close up shots that i was delighted that amrita has introduced me to her.

Amrita was the make up artist for the gentlemen on set, buzzing around taking care of redness and shine and giving them a natural yet striking look. of course aiden shaw couldnâ&amp;#x20AC;&amp;#x2122;t help but return the favour.

MANAGER BLOOM TWINS LENKA CHUBUKLIYEVA a wonderful person who works hard and fair no matter the circumstance. lenka played a big part in making the shoot happen, from supporting my inital ideal to helping me organzie things step by step. a great inspiration in particular in terms of artist management and work ethic.

THE BACKSTAGE PHOTOGRAPHY AND VIDEO TEAm was made up by ruben hart, diana chire and eva k. salvi, who i thank for providing me with great material to be able to produce and edit this printed piece. we had meetings and discussed creatively what kind of imagery we are aming for and i was once more impressed by the amount of skill and constant support accompanied with motivation. unfortunately, i did not get a great shot of ruben backstage, but above is an image of both diana and eva in action.