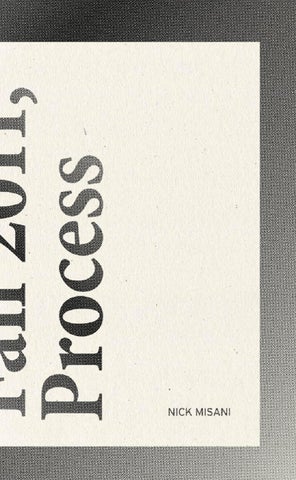 * Can be read as an asterisk—in which case, it stands for “tentative title”—or it could just be a sparkle.

I WILL ReSCUE ORNAMENTATION from unjust reputation of being a purely decorative and superficial applied art offer it as a sophisticated methodology that glorifies content and delivers an experience that is more complex, rich, and emotional than the traditional, â&amp;#x20AC;&amp;#x153;crystallineâ&amp;#x20AC;? relationship between form and content. Within the complex filigree of this controversial theme, I wish to explore the elevating power of ornamentation that is shaped by intent, laborious process, and careful consideration as well as the sense of sublimity and awe this work often ignites. I will also venture outside the seductive realm of formal virtuosity to deal with less shimmering, yet equally alluring themes of code, symbolism, and the sociopolitical implications of this often disregarded language of opulence.

Ornament is but the gilded shore of a most dangerous sea. 5

FOR CENTURIES, ORNAMENTATION WAS CONSIDERED TO BE A PATHWAY TO THE DIVINE. From illuminated manuscripts to the glory and opulence of the Baroque, heavy ornamentation humbled audiences through its dazzling display of devotion, time, and craft. Not surprisingly, ornamentation also holds political power: by imbuing value and importance to artifacts, it glorifies the owner, while elevating the maker and the artifact itself. From advertising the glory and absoluteness of the Catholic Church with breathtaking cathedrals and manuscripts to giving the new middle class a sense of status and importance after the industrial revolution, ornamentation flourished until the dawn of the XX century. It

was then, that the over abundance of ornament and the desire for universal communication caused a radical change; which came in the form of Modernism. With the Post-Modern rediscovery of complexity in the late 80s, ornament was allowed to reemerge and slowly regain its ubiquitous presence in the current design landscape. My interest in ornamentation as a rich, layered, and encoded alternative to modernist visual communication came from my appreciation of calligraphy with its carefully constructed forms, gestural elements, and almost ritualistic qualities and extended into any form of communication that displays meticulous, laborious process, craft, and intent Historical ornamental forms are absolutely striking and inspirational, but ornament has a relevance today that includes, but goes far beyond purely formal expression. Its power today is twofold: ornamentation, as I define it, cannot exist without serious intent, intense labor, and skill whichâ&amp;#x20AC;&amp;#x201D;in a field where speed and efficiency are keyâ&amp;#x20AC;&amp;#x201D;are often sacrificed. True ornamentation,

therefore, is quite uncommon. It provides and awe-inspiring, emotional experience that confers value to the work and to one&#39;s relationship with it, while defying the established technology/labor relationship that fuels capitalism in favor of an arguably inefficient, laborintensive process dedicated to what could be considers superfluous. Therefore, ornamentation is an encoded language that attaches layers of meaning (at times esoteric, at times exoteric) to a piece of communication. In both cases, it exposes the vessel moving beyond the dogmatic transparency of graphic design to a place where the form glorifies the content and is as important in enjoying the experience.

Over the course of my thesis, I intend to explore the various expressions of ornamentation as an encoded and annotative language of labor, process, skill, and virtuosity. I wish to discover its vocabulary, and syntax and fluently speak this narrative, elevating language in a way that is conscious of history and tradition, but relevant in today&#39;s design landscape.

IDENTIFY A PERSONAL COLLECTION &amp; MAKE A CATALOG ABOUT IT. The collection I cataloged was the myriad of associations and emotions I experience when looking at a particular picture of my mother and me.

The photograph is enlarged, folded into a signature, cut, and bound. This deconstruction and hyper-magnification speaks to the fragmented and nonlinear nature of memory and emotion. On the opposite side, I referenced the visual language of dictionaries and encyclopedias and created an alphabetical compendium of emotions and associations. The highly emotional

treatment of the photograph demanded a very analytic listing of these ephemeral elements. The hope is that through my curation of these memories, viewers can inject their own experiences and emotions.

Finally, because emotions are rarely felt on their own, the analytical half of the book is overlaid with a network of thin lines, connecting the emotions (in red) to each other with a thicker, dashed line connecting each emotion to the spot on the page where that feeling is instinctively located (on the opposite side of the photograph). Therefore, when looked against a light source, the particular section

of the photograph would glow through, revealing the emotional spot.

This book can be read linearly (on the analytical side) or as a whole by untying the knots on the binding and recomposing the image. The red string holding the book together, however, is too short to be tied againÂ­â&amp;#x20AC;&amp;#x201D;once untied, you cannot go back. Similarly, once one makes an effort to truly know and all the emotions and memories that make up a person, going back to seeing that person as a cold list of alphabetized words is quite impossible.

Initial concept sketches with total appropriation of the encyclopedia visual language (left) and exploring type and image reversals due to the signature folding and binding.

Research a section of time with at least two events; utilize time as a subject and reflect it in the form TO create a series that visually paces the events.

This piece focuses on ornamentation in baroque music. The “da capo” form stated two themes A and B, after which the composer would write “da capo” which instructed the musicians to repeat section one. The convention was for the singer to express themselves though free ornamentation during the repetition of the A theme. These stunning, unique interpretations of emotion and virtuosity provided a secondary narrative to based on honoring and concealing.

I took a recording of a famous aria by Händel, “Lascia ch’io Pianga” and represented it visually through what is essentially a 223-page info graphic. Each page represents one second, divided in tenths, of the four minute piece. Both the libretto and the pitch fluctuations in the vocal line fit within the graph. When areas of ornamentation appear, the space is covered in gold leaf; conferring value, honoring and concealing content, and providing uniqueness and unreproducibility through the texture of the gold and it’s naturally deckled edges.

To continue the language of value through material and labor, the book is hand bound using a modified coptic stitch.

say it with Floriography

TEACH A LANGUAGE BY DESIGNING A TEN-MINUTE LESSON.

Floriography is the practice of affixing meaning to flowers. This language has been used throughout history and across many cultures, but the degree of specificity and the popularity of use during Victorian England remains unparalleled. Floriography flourished in response to the strict codes of propriety and etiquette of the time, which would not allow people to openly express their emotions. Additionally, flowers were an omipresent form of ornamentation at the timeâ&amp;#x20AC;&amp;#x201D;from wallpaper to china patternsâ&amp;#x20AC;&amp;#x201D;therefore, meaning could be coded and decoded anywhere.

To teach this language, I used a contemporary coded language of emotion: emoticons. This form of typographic symbol is now as ubiquitous as flowers were then, butâ&amp;#x20AC;&amp;#x201D; just like flowersâ&amp;#x20AC;&amp;#x201D;if one is not familiar with the great variety of emotions beyond the basic :-) and :-(, more complex compositions , like (:-6, can be quite difficult to decode.

Through a brief vocabulary that uses only emoticons and provides no English translation (to reference the misinterpretation that would often occur then), students will be able to complete a few brief exercises and finally encode their own message by

ornamenting a letter with a modular sticker frame system.

The form has a cheaply-produced ĂŚsthetic which encourages direct interaction with the material, without fear of damaging something precious.

CHART YOUR INTERACTION WITH TECHNOLOGY FOR ONE DAY AND EXPLORE YOUR FINDINGS. After compiling my data, I was fascinated by the interaction between emotion and technology and more specifically on the frequency, and especially, the brevity of technologyenabled emotional episodes.

After exploring a potential application that would explore patterns in the userâ&amp;#x20AC;&amp;#x2122;s writing and voice and keep a record of supposed emotional responses, I decided to focus on referencing this brevity through a time consuming process often reserved for more

traditionally meaningful occasions where emotion is expected to sustain for years. I initially focused on the language and created a statement that spoke directly of the brevity of this emotion and experimented with ASCII characters, glitches, pixilation, and iPhone vernacular.

I eventually shifted to hand lettering and appropriated a wedding-like tone, but later, decided to letter a text message I had received. The contrast between the apparent triviality and immediacy of the messageâ&amp;#x20AC;&amp;#x201D;both in content and in languageâ&amp;#x20AC;&amp;#x201D;and the carefully rendered and meticulously planned hand-lettering is intended to make the viewer aware of the quickness with which we dismiss small signs of affection because of our increasing need for efficiency and speed through technology.

As a side project, I deconstructed the composition, categorized its pieces, and created a set of acrylic stencils, with the intention of packaging them into a set that would guide the user through an abstraction of my process in creating this piece.

When presented to the class, however, everyone interacted with them freely, creating patterns and arabesques. This type of repurposing was very interesting and may become the seed for a future exploration.

RESEARCH A SERIES OF TOPICS AND CREATE A PROJECT THAT ENCOMPASSES THE RESEARCHED.

The inspiration for this project came from an article called “The Technological Sublime,” by Jos de Mul. Traditionally, the sublime is the combination of fear and terror with awe and wonder felt when confronted with the power and glory of nature; and, by extension, of God. As the decades progressed, we no longer see nature as a wild, dangerous power, but as something that can be tamed and malleated to best suit our wishes and needs. The real unknown today is digital technology. So what role does religion play in this new space?

I found code to be the most eloquent expression of the enormous volume of information that makes life as we know it run more or less smoothly. I see many parallels between (computer) script and (religious) scripture, so I illuminated the home page code of the three institutions that form the Holy Trinity of today: Google, Facebook,and You Tube. All these sites have massive user bases who visit their pages religiously.

By only using the “decorative” or non essential elements on these seemingly sparse web pages, keeping them at 100 percent scale and only duplicating, rotating (by 90° increments), or reflecting, I hope to highlight the omnipresence and near omiscience of these institutions by glorifying the basis of their existence in a visual language traditionally used for that very purpose. The project will continue over the following few weeks to include full illuminations of both You Tube and Facebook (now only concept sketches). The three pages will

be different but highly interconnected (as in the Holy Trinity) through hidden visual cues that link them together.

Aside from making a map guiding people through my presentation on ornamentation, I compiled all my writings into a tiled wallpaper (that I then bound into a book) dealing with the shifting and mixing of the role of the designer as well as the still unclear and disjointed opinions I have about the profession and my role within its landscape.

My work and process from the first semester of my second year of the MFA program in Design at Pratt.