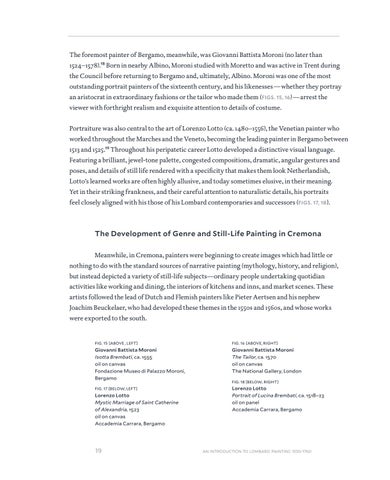 The foremost painter of Bergamo, meanwhile, was Giovanni Battista Moroni (no later than 1524–1578).18 Born in nearby Albino, Moroni studied with Moretto and was active in Trent during the Council before returning to Bergamo and, ultimately, Albino. Moroni was one of the most outstanding portrait painters of the sixteenth century, and his likenesses — whether they portray an aristocrat in extraordinary fashions or the tailor who made them (FIGS. 15, 16)— arrest the viewer with forthright realism and exquisite attention to details of costume. Portraiture was also central to the art of Lorenzo Lotto (ca. 1480–1556), the Venetian painter who worked throughout the Marches and the Veneto, becoming the leading painter in Bergamo between 1513 and 1525.19 Throughout his peripatetic career Lotto developed a distinctive visual language. Featuring a brilliant, jewel-tone palette, congested compositions, dramatic, angular gestures and poses, and details of still life rendered with a specificity that makes them look Netherlandish, Lotto’s learned works are often highly allusive, and today sometimes elusive, in their meaning. Yet in their striking frankness, and their careful attention to naturalistic details, his portraits feel closely aligned with his those of his Lombard contemporaries and successors (FIGS. 17, 18).

The Development of Genre and Still-Life Painting in Cremona Meanwhile, in Cremona, painters were beginning to create images which had little or nothing to do with the standard sources of narrative painting (mythology, history, and religion), but instead depicted a variety of still-life subjects—ordinary people undertaking quotidian activities like working and dining, the interiors of kitchens and inns, and market scenes. These artists followed the lead of Dutch and Flemish painters like Pieter Aertsen and his nephew Joachim Beuckelaer, who had developed these themes in the 1550s and 1560s, and whose works were exported to the south.

Faithful to Nature: Eleven Lombard Paintings 1530 - 1760 is a catalogue produced on the occasion of the exhibition at Nicholas Hall, 17 East 76th Street, New York between November 1 and December 23, 2019. It includes a newly commissioned essay by Dr. Virginia Brilliant that surveys the history of Lombard Painting and the taste for it in Europe and the United States. The catalogue also features a comprehensive index of Lombard paintings in North American public collections—an abbreviated yet up-to-date survey built on the 1972 Frederichsen Zeri Census. The printed catalogue shall be available to the public in late November this year. ISBN 978-1-7326492-0-0