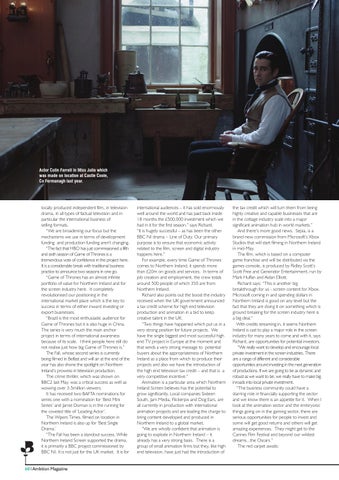 Actor Colin Farrell in Miss Julie which was made on location at Castle Coole, Co Fermanagh last year.

locally produced independent film, in television drama, in all types of factual television and in particular the international business of selling formats. “We are broadening our focus but the mechanisms we use in terms of development funding and production funding aren’t changing. “The fact that HBO has just commissioned a fifth and sixth season of Game of Thrones is a tremendous vote of confidence in the project here. It is a considerable break with traditional business practice to announce two seasons in one go. “Game of Thrones has an almost infinite portfolio of value for Northern Ireland and for the screen industry here. It completely revolutionised our positioning in the international market place which is the key to success in terms of either inward investing or export businesses. “Brazil is the most enthusiastic audience for Game of Thrones but it is also huge in China. The series is very much the main anchor project in terms of international awareness because of its scale. I think people here still do not realise just how big Game of Thrones is.” The Fall, whose second series is currently being filmed in Belfast and will air at the end of the year has also shone the spotlight on Northern Ireland’s prowess in television production. The crime thriller, which was shown on BBC2 last May, was a critical success as well as wowing over 3.5million viewers. It has received two BAFTA nominations for series one with a nomination for ‘Best Mini Series’ and Jamie Dornan is in the running for the coveted title of ‘Leading Actor’. The Wipers Times, filmed on location in Northern Ireland is also up for ‘Best Single Drama.’ “The Fall has been a standout success. While Northern Ireland Screen supported the drama, it is primarily a BBC project commissioned by BBC NI. It is not just for the UK market. It is for

international audiences – it has sold enormously well around the world and has paid back inside 18 months the £500,000 investment which we had in it for the first season.” says Richard. “It is hugely successful – as has been the other BBC NI drama – Line of Duty. Our primary purpose is to ensure that economic activity related to the film, screen and digital industry happens here.” For example, every time Game of Thrones comes to Northern Ireland, it spends more than £20m on goods and services. In terms of job creation and employment, the crew totals around 500 people of which 350 are from Northern Ireland. Richard also points out the boost the industry received when the UK government announced a tax credit scheme for high end television production and animation in a bid to keep creative talent in the UK. “Two things have happened which put us in a very strong position for future projects. We have the single biggest and most successful high end TV project in Europe at the moment and that sends a very strong message to potential buyers about the appropriateness of Northern Ireland as a place from which to produce their projects and also we have the introduction of the high end television tax credit – and that is a very competitive incentive.” Animation is a particular area which Northern Ireland Screen believes has the potential to grow significantly. Local companies Sixteen South, Jam Media, Flickerpix and Dog Ears, are all currently in production with international animation projects and are leading the charge to bring content developed and produced in Northern Ireland to a global market. “We are wholly confident that animation is going to explode in Northern Ireland – it already has a very strong basis. There is a group of small animation firms but they, like high end television, have just had the introduction of

the tax credit which will turn them from being highly creative and capable businesses that are in the cottage industry scale into a major significant animation hub in world markets.” And there’s more good news. Sepia, is a brand-new commission from Microsoft’s Xbox Studios that will start filming in Northern Ireland in mid-May. The film, which is based on a computer game franchise and will be distributed via the games console, is produced by Ridley Scott’s Scott Free and Generator Entertainment, run by Mark Huffan and Aidan Elliott. Richard says: “This is another big breakthrough for us - screen content for Xbox. Microsoft coming in and spending dollars in Northern Ireland is good on any level but the fact that they are doing it on something which is ground breaking for the screen industry here is a big deal.” With credits streaming in, it seems Northern Ireland is cast to play a major role in the screen industry for many years to come and with it, says Richard, are opportunities for potential investors. “We really want to develop and encourage local private investment in the screen industries. There are a range of different and considerable opportunities around investing in the next generation of productions. If we are going to be as dynamic and robust as we want to be, we really have to make big inroads into local private investment. “The business community could have a starring role in financially supporting the sector and we know there is an appetite for it. When I look at the animation sector and the embryonic things going on in the gaming sector, there are serious opportunities for people to invest and some will get good returns and others will get amazing experiences. They might get to the Cannes Film Festival and beyond our wildest dreams...the Oscars.” The red carpet awaits. 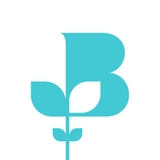 NI Chamber of Commerce and Industry