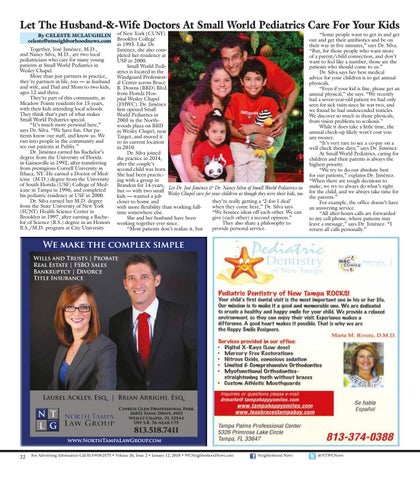 Let The Husband-&amp;-Wife Doctors At Small World Pediatrics Care For Your Kids By CELESTE MCLAUGHLIN

celeste@ntneighborhoodnews.com Together, José Jiménez, M.D., and Nancy Silva, M.D., are two local pediatricians who care for many young patients at Small World Pediatrics in Wesley Chapel. More than just partners in practice, they’re partners in life, too — as husband and wife, and Dad and Mom to two kids, ages 12 and three. They’re part of this community, as Meadow Pointe residents for 15 years, with their kids attending local schools. They think that’s part of what makes Small World Pediatrics special. “It’s much more personal here,” says Dr. Silva. “We have fun. Our patients know our staff, and know us. We run into people in the community and see our patients at Publix.” Dr. Jiménez earned his Bachelor’s degree from the University of Florida in Gainesville in 1992, after transferring from prestigious Cornell University in Ithaca, NY. He earned a Doctor of Medicine (M.D.) degree from the University of South Florida (USF) College of Medicine in Tampa in 1996, and completed his pediatric residency at USF in 2000. Dr. Silva earned her M.D. degree from the State University of New York (SUNY) Health Science Center in Brooklyn in 1997, after earning a Bachelor of Science (B.S.) degree in an Honors B.S./M.D. program at City University

of New York (CUNY) Brooklyn College in 1993. Like Dr. Jiménez, she also completed her residency at USF in 2000. Small World Pediatrics is located in the Windguard Professional Center across Bruce B. Downs (BBD) Blvd. from Florida Hospital Wesley Chapel (FHWC). Dr. Jiménez first opened Small World Pediatrics in 2003 in the Northwoods plaza on BBD in Wesley Chapel, near Target, and moved it to its current location in 2010. Dr. Silva joined the practice in 2014, after the couple’s second child was born. She had been practicing with a group in Brandon for 14 years, Let Dr. José Jiménez &amp; Dr. Nancy Silva of Small World Pediatrics in but — with two small Wesley Chapel care for your children as though they were their kids, too. kids — wanted a job they’re really getting a ‘2-for-1 deal’ closer to home and when they come here,” Dr. Silva says. with more flexibility than working full“We bounce ideas off each other. We can time somewhere else. give (each other) a second opinion.” She and her husband have been They also share a philosophy to working together ever since. provide personal service. “Most patients don’t realize it, but

“Some people want to get in and get out and get their antibiotics and be on their way in five minutes,” says Dr. Silva. “But, for those people who want more of a parent/child connection, and don’t want to feel like a number, those are the patients who should come to us.” Dr. Silva says her best medical advice for your children is to get annual physicals. “Even if your kid is fine, please get an annual physical,” she says. “We recently had a seven-year-old patient we had only seen for sick visits since he was two, and we found he had undescended testicles. We discover so much in those physicals, from vision problems to scoliosis.” While it does take a little time, the annual check-up likely won’t cost you any money. “It’s very rare to see a co-pay on a well check these days,” says Dr. Jiménez. At Small World Pediatrics, caring for children and their parents is always the highest priority. “We try to do our absolute best for our patients,” explains Dr. Jiménez. “When there are tough decisions to make, we try to always do what’s right for the child, and we always take time for the parents.” For example, the office doesn’t have an answering service. “All after-hours calls are forwarded to my cell phone, where patients may leave a message,” says Dr. Jiménez. “I return all calls personally.” 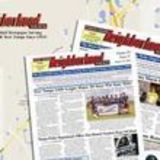