Explore: Adventures on the Gorge 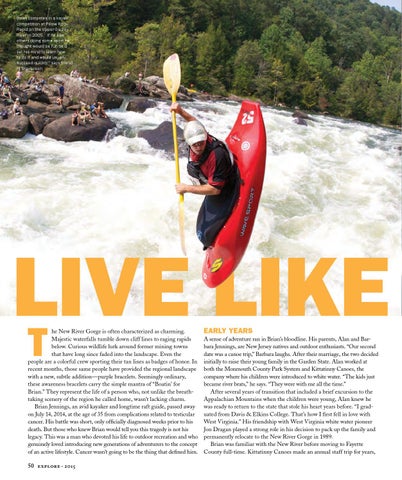 Brian competes in a kayak competition at Pillow Rock Rapid on the Upper Gauley River in 2005. If he saw others doing some sport he thought would be fun he’d set his mind to learn how to do it and would usually succeed quickly,” says friend PJ Stevenson.

Live Like T he New River Gorge is often characterized as charming. Majestic waterfalls tumble down cliff lines to raging rapids below. Curious wildlife lurk around former mining towns that have long since faded into the landscape. Even the people are a colorful crew sporting their tan lines as badges of honor. In recent months, those same people have provided the regional landscape with a new, subtle addition—purple bracelets. Seemingly ordinary, these awareness bracelets carry the simple mantra of “Boatin’ for Brian.” They represent the life of a person who, not unlike the breathtaking scenery of the region he called home, wasn’t lacking charm. Brian Jennings, an avid kayaker and longtime raft guide, passed away on July 14, 2014, at the age of 35 from complications related to testicular cancer. His battle was short, only officially diagnosed weeks prior to his death. But those who knew Brian would tell you this tragedy is not his legacy. This was a man who devoted his life to outdoor recreation and who genuinely loved introducing new generations of adventurers to the concept of an active lifestyle. Cancer wasn’t going to be the thing that defined him.

A sense of adventure ran in Brian’s bloodline. His parents, Alan and Barbara Jennings, are New Jersey natives and outdoor enthusiasts. “Our second date was a canoe trip,” Barbara laughs. After their marriage, the two decided initially to raise their young family in the Garden State. Alan worked at both the Monmouth County Park System and Kittatinny Canoes, the company where his children were introduced to white water. “The kids just became river brats,” he says. “They were with me all the time.” After several years of transition that included a brief excursion to the Appalachian Mountains when the children were young, Alan knew he was ready to return to the state that stole his heart years before. “I graduated from Davis &amp; Elkins College. That’s how I first fell in love with West Virginia.” His friendship with West Virginia white water pioneer Jon Dragan played a strong role in his decision to pack up the family and permanently relocate to the New River Gorge in 1989. Brian was familiar with the New River before moving to Fayette County full-time. Kittatinny Canoes made an annual staff trip for years,

Explore: Adventures on the Gorge

In this issue we give you a glimpse at how Adventures on the Gorge became the best adventure getaway, discover the region's tall tales, and capture the state's hidden beauty on camera. 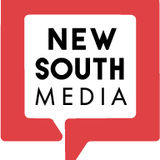