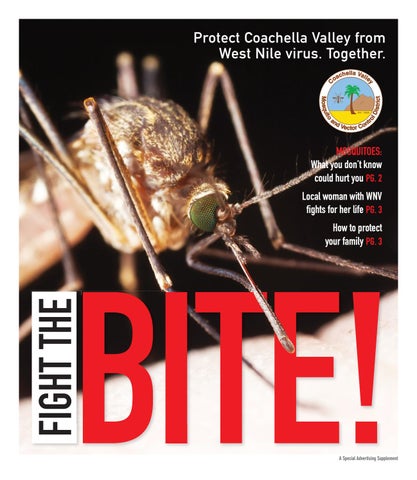 Female mosquitoes only bite because they need blood to produce eggs. They are attracted to carbon dioxide, body odor, temperature, and movement — signs that a LIVING, WARM-BLOODED ANIMAL is nearby.

Diseases that are transmitted to humans via the bite of an infected mosquito KILL MORE PEOPLE WORLDWIDE than any other single disease.

In the Coachella Valley, SOME MOSQUITOES ARE VECTORS OF DISEASES including West Nile virus (WNV), Saint Louis encephalitis, and western equine encephalomyelitis. Most people infected with WNV won’t get sick, but 1 in 5 will develop flu-like symptoms that could last months. 1 IN 150 WILL DEVELOP A POTENTIALLY FATAL NEUROLOGICAL DISEASE. TWO MOSQUITO SPECIES IN THE COACHELLA VALLEY ACTIVELY SPREAD WNV: Culex tarsalis (western encephalitis mosquito) and Culex quinquefasciatus (southern house mosquito).

Female mosquitoes need stagnant water to lay their eggs, up to 300 at a time. So remember: NO STANDING WATER, NO MOSQUITOES! A non-functioning pool can serve as the breeding ground for THOUSANDS of mosquitoes. THEY DON’T NEED A LOT OF WATER — mosquitoes can breed in storm drains, buckets, flowerpots, saucers, birdbaths, pet bowls, kiddie pools and toys, and old tires. After mosquito eggs hatch, they go through two more life stages to become flying adults. The best way to get rid of mosquitoes is to TARGET THEM IN THE WATER before they reach adulthood.

Branka B. Lothrop, Ph.D., General Manager of CVMVCD, answers some frequently asked questions: Q. People don’t normally associate mosquitoes with the desert. How is it that we have a mosquito problem? A. The Coachella Valley is an urbanized and agricultural desert. With urbanization comes new mosquito habitats such as drains, retention basins, and neglected pools. In the rural areas, there is intensive agricultural irrigation, marshland along the Salton Sea, and man-made wetlands, which are prime mosquitobreeding areas. While other areas in the state have a winter break when mosquitoes are dormant, the desert has pleasant temperatures yearround; so no break for us! 2

WHAT YOU DON’T KNOW COULD HURT YOU …

Q. What does the District do to fight mosquitoes? A. The District tracks the presence of mosquitoes and West Nile virus, and applies treatments as needed. District programs emphasize the leasttoxic and non-pesticide solutions in mosquito management, and we carry out intensive public outreach and educational campaigns that stress prevention and protection. District staff members also conduct research projects focused on many aspects of the District’s Integrated Vector Management program, often collaborating with university scientists and various private and governmental organizations.

Though mosquitoes can bite day or night, disease-carrying species in the Coachella Valley usually FEED IN THE HOURS AROUND DUSK AND DAWN.

The Coachella Valley Mosquito and Vector Control District (CVMVCD) uses close to 100 traps in its surveillance program. The number of mosquitoes trapped is compared to a five-year average, which is then used to assess the RISK OF DISEASE TRANSMISSION. In 2013, 372 CALIFORNIANS BECAME SICK WITH WEST NILE VIRUS, with three cases in the Coachella Valley, underscoring the importance of a strong vector control program. There is no cure for WNV; protection and prevention are the best tools.

Q. Why is the District’s work important to Coachella Valley residents and visitors? A. Potentially severe impacts of disease on human and animal populations make it a priority for the District to control the vectors that transmit these diseases. For diseases where there is no effective cure, such as West Nile virus, vector control remains the only way to protect populations.

Q. How do you work with the community? A. We work closely with cities, local agencies, homeowners associations, and property owners to ensure that drains, irrigation, wells, and landscaping are not creating mosquito-breeding areas. The District’s Public Outreach program provides important information to residents, schools, organizations, and visitors on protection from mosquito-borne disease. We are pleased to acknowledge that our community partners have pulled together this year like never before to Fight the Bite!

Esther Gosché, pictured outside her home in Palm Springs, endured a frightening six-month ordeal when she contracted West Nile virus.

alm Springs residents Esther Gosché and Allen Morris are both retired and enjoy an active lifestyle full of Bocce ball, travel, and visiting with grandchildren. But when Esther contracted West Nile virus after being bitten by an infected mosquito, they were in for an ordeal unlike anything they’d encountered in their 33 years together. “I’ve had three children, a hysterectomy, and a brain tumor operation, but I’ve never felt that bad,” Esther says. Esther began feeling ill in August 2013 with flulike symptoms. Unlike the flu, Esther’s condition never got better. She experienced two weeks of fever, nausea, a “giant fatigue,” and difficulty breathing. Esther’s doctor initially thought she had bronchitis and prescribed an antibiotic. But when Esther’s temperature climbed to above 102 degrees and she experienced delirium, Allen took her to the hospital. “I kept saying, ‘I don’t know what this is. This is not normal,’” Esther says. Aspirin and hydrating fluids wouldn’t break Esther’s fever, so doctors moved her into isolation while they tried to diagnose her illness and prevent the spread of what might have been a contagious infectious disease.

“Some of the things that [the doctors] said really got us concerned,” Allen says. “We were very, very scared — very concerned that she might not make it through this.”

“ DON’T THINK IT CAN’T HAPPEN TO YOU. IT CAN.” ESTHER GOSCHÉ, WEST NILE VIRUS SURVIVOR

Finally, Esther’s fever came down and she was released to recuperate at home. A few days later, she received a diagnosis: To her shock, she’d tested positive for West Nile virus. West Nile virus is found in Coachella Valley annually, most often in mosquitoes and sometimes humans — Esther’s was one of three confirmed cases of West Nile virus in the Coachella Valley in 2013. According to the Centers for Disease Control and Prevention, around 2,400 people became sick with West Nile virus in the United States in 2013, resulting in 114 deaths. There is no vaccine for the virus and no cure — Esther’s doctors told her to rest and watch NON-FUNCTIONING SWIMMING POOLS AND SPAS

for worsening fever. When Esther’s condition worsened, she was hospitalized a second time and put on oxygen. “The impact was so strange … to not have control, and not know really what I could do to get better,” Esther says. “I just had to fight it off.” Esther eventually regained her appetite, and with it her strength. It would take months to feel like herself again, and a full six months before she felt up to the task of driving. “Recovery is not easy. It takes awhile,” Esther says. Esther is one of the lucky ones. Some people who survive the disease have lifelong neurological effects. These days, Esther feels much better and says the experience has impressed upon both her and Allen the need to take the threat of West Nile virus seriously, a message they try to pass on to friends, family, and neighbors. They encourage neighbors to check their property for stagnant water, make sure their pools and fountains are functioning, and be on the lookout for potential breeding sources around the neighborhood — mostly, to be aware. “Don’t think it can’t happen to you,” Esther cautions. “It can.”

WATCH OUT FOR THESE HOTSPOTS:

PROTECT YOURSELF AND YOUR FAMILY • Avoid outdoor activity at dawn and dusk, when mosquitoes that transmit disease are most active.

PONDS OR LOW-LYING AREAS ON THE PROPERTY

How you can help prevent the spread of West Nile virus and other mosquito-borne diseases:

• Contact CVMVCD for mosquitoﬁsh, which feed on mosquito larvae and pupae, to stock in your ornamental pond. • Report sources of standing water in your neighborhood, such as ditches or nonKIDDIE POOLS, functioning swimming pools, by calling WAGONS, OR OTHER TOYS CVMVCD at 760-342-8287 or 888-343-9399.

• Make sure doors and windows of your home are ﬁtted with screens to keep biting pests outside – and make sure screens are free of holes. |

MORE THAN MOSQUITOES CVMVCD’s primary services include the surveillance and control of mosquitoes, red imported fire ants (RIFA), and eye gnats, and offering assistance with other nuisance pests that threaten public health or safety.

The control of this invasive species is one of the primary efforts of the District. The ants become aggressive and will swarm and sting repeatedly in large numbers when their mounds are threatened. Contact the district for assistance.

We offer assistance with problems relating to roof rats, flies, and Africanized honey bees when there is an imminent threat to the public. District staff conduct inspections and offer information on habitat reduction, exclusion from dwellings, breeding sources (in the case of flies), and control options.

Eye gnats are nuisance pests that do not bite. They have been linked with the spread of “pinkeye” (conjunctivitis). The District uses baited bottle traps to reduce the number of gnats to tolerable levels. The traps are placed in golf courses, parks, and agricultural areas.

We are dedicated to enhancing the quality of life for our community by providing effective and environmentally sound vector control and disease prevention programs through research, development, and awareness. YUCCA VALLEY

Mosquitofish eat mosquito larvae and pupae and are an effective, environmentally friendly solution to controlling the mosquito population. The District uses mosquitofish in storm drains and ditches and provides them freeof-charge to residents for use in ornamental ponds and nonfunctioning swimming pools.

Public education is a main component of the District’s strategy to reduce mosquitoes and other vectors in Coachella Valley. We distribute information at community fairs, events, and during presentations to schools and homeowners. We also keep the public up-to-date through advertising campaigns, news releases, and our website at www.cvmvcd.org. 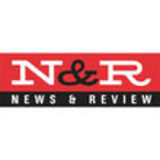