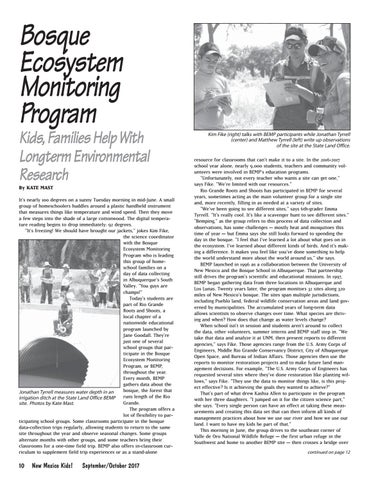 It’s nearly 100 degrees on a sunny Tuesday morning in mid-June. A small group of homeschoolers huddles around a plastic handheld instrument that measures things like temperature and wind speed. Then they move a few steps into the shade of a large cottonwood. The digital temperature reading begins to drop immediately: 92 degrees. “It’s freezing! We should have brought our jackets,” jokes Kim Fike, the science coordinator with the Bosque Ecosystem Monitoring Program who is leading this group of homeschool families on a day of data collecting in Albuquerque’s South Valley. “You guys are champs!” Today&#39;s students are part of Rio Grande Roots and Shoots, a local chapter of a nationwide educational program launched by Jane Goodall. They’re just one of several school groups that participate in the Bosque Ecosystem Monitoring Program, or BEMP, throughout the year. Every month, BEMP gathers data about the bosque, the forest that Jonathan Tyrrell measures water depth in an runs length of the Rio irrigation ditch at the State Land Office BEMP Grande. site. Photos by Kate Mast. The program offers a lot of flexibility to participating school groups. Some classrooms participate in the bosque data-collection trips regularly, allowing students to return to the same site throughout the year and observe seasonal changes. Some groups alternate months with other groups, and some teachers bring their classrooms for a one-time field trip. BEMP also offers in-classroom curriculum to supplement field trip experiences or as a stand-alone

Kim Fike (right) talks with BEMP participants while Jonathan Tyrrell (center) and Matthew Tyrrell (left) write up observations of the site at the State Land Office.

resource for classrooms that can’t make it to a site. In the 2016-2017 school year alone, nearly 9,000 students, teachers and community volunteers were involved in BEMP’s education programs. “Unfortunately, not every teacher who wants a site can get one,” says Fike. “We’re limited with our resources.” Rio Grande Roots and Shoots has participated in BEMP for several years, sometimes acting as the main volunteer group for a single site and, more recently, filling in as needed at a variety of sites. “We’ve been going to see different sites,” says 6th-grader Emma Tyrrell. “It’s really cool. It’s like a scavenger hunt to see different sites.” “Bemping,” as the group refers to this process of data collection and observations, has some challenges — mostly heat and mosquitoes this time of year — but Emma says she still looks forward to spending the day in the bosque. “I feel that I’ve learned a lot about what goes on in the ecosystem. I’ve learned about different kinds of birds. And it’s making a difference. It makes you feel like you’ve done something to help the world understand more about the world around us,” she says. BEMP launched in 1996 as a collaboration between the University of New Mexico and the Bosque School in Albuquerque. That partnership still drives the program’s scientific and educational missions. In 1997, BEMP began gathering data from three locations in Albuquerque and Los Lunas. Twenty years later, the program monitors 32 sites along 320 miles of New Mexico’s bosque. The sites span multiple jurisdictions, including Pueblo land, federal wildlife conservation areas and land governed by municipalities. The accumulated years of long-term data allows scientists to observe changes over time. What species are thriving and when? How does that change as water levels change? When school isn’t in session and students aren’t around to collect the data, other volunteers, summer interns and BEMP staff step in. “We take that data and analyze it at UNM, then present reports to different agencies,” says Fike. Those agencies range from the U.S. Army Corps of Engineers, Middle Rio Grande Conservancy District, City of Albuquerque Open Space, and Bureau of Indian Affairs. Those agencies then use the reports to monitor restoration projects and to make future land management decisions. For example, “The U.S. Army Corps of Engineers has requested several sites where they’ve done restoration like planting willows,” says Fike. “They use the data to monitor things like, is this project effective? Is it achieving the goals they wanted to achieve?” That’s part of what drew Kashia Allen to participate in the program with her three daughters. “I jumped on it for the citizen science part,” she says. “Every single person can have an effect at taking these measurements and creating this data set that can then inform all kinds of management practices about how we use our river and how we use our land. I want to have my kids be part of that.” This morning in June, the group drives to the southeast corner of Valle de Oro National Wildlife Refuge — the first urban refuge in the Southwest and home to another BEMP site — then crosses a bridge over continued on page 12