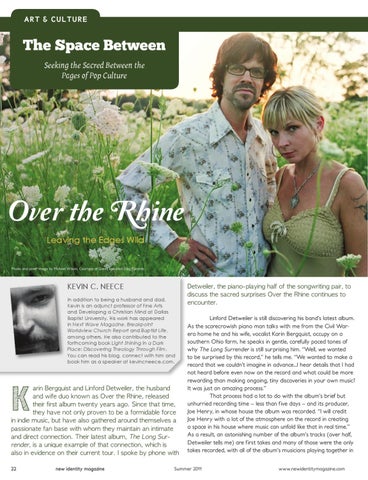 Over the Rhine Leaving the Edges Wild

KEVIN C. NEECE In addition to being a husband and dad, Kevin is an adjunct professor of Fine Arts and Developing a Christian Mind at Dallas Baptist University. His work has appeared in Next Wave Magazine, Breakpoint Worldview Church Report and Baptist Life, among others. He also contributed to the forthcoming book Light Shining in a Dark Place: Discovering Theology Through Film. You can read his blog, connect with him and book him as a speaker at kevincneece.com.

arin Bergquist and Linford Detweiler, the husband and wife duo known as Over the Rhine, released their first album twenty years ago. Since that time, they have not only proven to be a formidable force in indie music, but have also gathered around themselves a passionate fan base with whom they maintain an intimate and direct connection. Their latest album, The Long Surrender, is a unique example of that connection, which is also in evidence on their current tour. I spoke by phone with

Detweiler, the piano-playing half of the songwriting pair, to discuss the sacred surprises Over the Rhine continues to encounter. Linford Detweiler is still discovering his band’s latest album. As the scarecrowish piano man talks with me from the Civil Warera home he and his wife, vocalist Karin Bergquist, occupy on a southern Ohio farm, he speaks in gentle, carefully paced tones of why The Long Surrender is still surprising him. “Well, we wanted to be surprised by this record,” he tells me. “We wanted to make a record that we couldn’t imagine in advance...I hear details that I had not heard before even now on the record and what could be more rewarding than making ongoing, tiny discoveries in your own music? It was just an amazing process.” That process had a lot to do with the album’s brief but unhurried recording time – less than five days – and its producer, Joe Henry, in whose house the album was recorded. “I will credit Joe Henry with a lot of the atmosphere on the record in creating a space in his house where music can unfold like that in real time.” As a result, an astonishing number of the album’s tracks (over half, Detweiler tells me) are first takes and many of those were the only takes recorded, with all of the album’s musicians playing together in

The Summer 2011 issue features articles such as Amazing Grace, The Pursuit of The New, The What-If Syndrome, Muting The Noise of The World Through Prayer Walks and more... 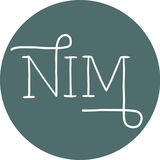