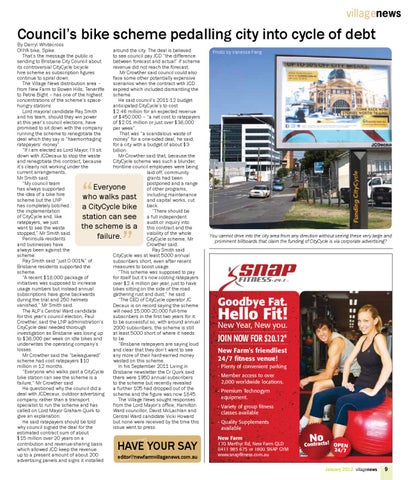 Council’s bike scheme pedalling city into cycle of debt By Darryl Whitecross ONYA bike, Spike. That’s the message the public is sending to Brisbane City Council about its controversial CityCycle bicycle hire scheme as subscription figures continue to spiral down. The Village News distribution area – from New Farm to Bowen Hills; Teneriffe to Petrie Bight – has one of the highest concentrations of the scheme’s spacehungry stations. Lord mayoral candidate Ray Smith and his team, should they win power at this year’s council elections, have promised to sit down with the company running the scheme to renegotiate the deal which they say is “haemorrhaging ratepayers’ money”. “If I am elected as Lord Mayor, I’ll sit down with JCDecaux to stop the waste and renegotiate this contract, because it’s clearly not working under the current arrangements, Mr Smith said. “My council team has always supported the idea of a bike hire scheme but the LNP has completely botched the implementation of CityCycle and, like ratepayers, we just want to see the waste stopped,” Mr Smith said. Peninsula residents and businesses have always been against the scheme. Ray Smith said “just 0.001%” of Brisbane residents supported the scheme. “A recent $18,000 package of initiatives was supposed to increase usage numbers but instead annual subscriptions have gone backwards during the trial and 250 helmets vanished,” Mr Smith said. The ALP’s Central Ward candidate for this year’s council election, Paul Crowther, said the LNP administration’s CityCycle deal needed thorough investigation as Brisbane was losing up to $38,000 per week on idle bikes and underwrites the operating company’s losses. Mr Crowther said the “beleaguered” scheme had cost ratepayers $10 million in 12 months. “Everyone who walks past a CityCycle bike station can see the scheme is a failure,” Mr Crowther said. He questioned why the council did a deal with JCDecaux, outdoor advertising company, rather than a transport specialist to run the scheme and has called on Lord Mayor Graham Quirk to give an explanation. He said ratepayers should be told why council signed the deal for the estimated contract sum of about $15 million over 20 years on a contribution and revenue-sharing basis which allowed JCD keep the revenue up to a present amount of about 200 advertising panels and signs it installed

around the city. The deal is believed to see council pay JCD “the difference between forecast and actual” if scheme revenue did not reach the forecast. Mr Crowther said council could also face some other potentially expensive scenarios when the contract with JCD expired which included dismantling the scheme. He said council’s 2011-12 budget anticipated CityCycle’s to cost $2.46 million for an expected revenue of $450,000 – “a net cost to ratepayers of $2.01 million or just over $38,000 per week”. That was “a scandalous waste of money” for a one-sided deal, he said, for a city with a budget of about $3 billion. Mr Crowther said that, because the CityCycle scheme was such a blunder, frontline council employees were being laid off, community grants had been postponed and a range of other programs, including maintenance and capital works, cut back. “There should be a full independent audit or inquiry into this contract and the viability of the whole CityCycle scheme, Mr Crowther said. Ray Smith said CityCycle was at least 5000 annual subscribers short, even after recent measures to boost usage. “This scheme was supposed to pay for itself but it’s now costing ratepayers over $2.4 million per year, just to have bikes sitting on the side of the road gathering rust and dust,” he said. “The CEO of CityCycle operator JC Decaux is on record saying the scheme will need 15,000-20,000 full-time subscribers in the first two years for it to be successful so, with around annual 2000 subscribers, the scheme is still at least 5000 short of where it needs to be. “Brisbane ratepayers are saying loud and clear that they don’t want to see any more of their hard-earned money wasted on this scheme. In his September 2011 Living in Brisbane newsletter the Cr Quirk said there were 1950 annual subscribers to the scheme but recently revealed a further 105 had dropped out of the scheme and the figure was now 1845. The Village News sought responses from the Lord Mayor’s office, Hamilton Ward councillor, David McLachlan and Central Ward candidate Vicki Howard but none were received by the time this issue went to press.

Everyone who walks past a CityCycle bike station can see the scheme is a failure.

You cannot drive into the city area from any direction without seeing these very large and prominent billboards that claim the funding of CityCycle is via corporate advertising?

A monthly magazine for the residents, workersand visitors of New Farm, Fortitude Valley,Teneriffe, Newstead, Kangaroo Point, Spring Hilland Petrie Bight. The Village News is personallyhand-delivered to all homes, apartments andbusinesses in those areas.