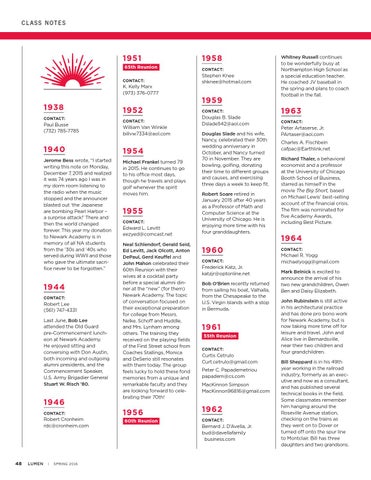 Jerome Bess wrote, “I started writing this note on Monday, December 7, 2015 and realized it was 74 years ago I was in my dorm room listening to the radio when the music stopped and the announcer blasted out ‘the Japanese are bombing Pearl Harbor – a surprise attack!’ There and then the world changed forever. This year my donation to Newark Academy is in memory of all NA students from the ’30s and ’40s who served during WWII and those who gave the ultimate sacriﬁce never to be forgotten.”

Michael Frankel turned 79 in 2015. He continues to go to his office most days, though he travels and plays golf whenever the spirit moves him.

Edward L. Levitt eezyed@comcast.net Neal Schlendorf, Gerald Seid, Ed Levitt, Jack Olcott, Anton DePaul, Gerd Keuffel and John Mahon celebrated their 60th Reunion with their wives at a cocktail party before a special alumni dinner at the “new” (for them) Newark Academy. The topic of conversation focused on their exceptional preparation for college from Messrs. Nelke, Schoff and Huddle, and Mrs. Lynham among others. The training they received on the playing ﬁelds of the First Street school from Coaches Stallings, Monica and DeSerio still resonates with them today. The group feels lucky to hold these fond memories from a unique and remarkable faculty and they are looking forward to celebrating their 70th!

Douglas B. Slade Dslade542@aol.com Douglas Slade and his wife, Nancy, celebrated their 30th wedding anniversary in October, and Nancy turned 70 in November. They are bowling, golﬁng, donating their time to different groups and causes, and exercising three days a week to keep ﬁt. Robert Soare retired in January 2015 after 40 years as a Professor of Math and Computer Science at the University of Chicago. He is enjoying more time with his four granddaughters.

Frederick Katz, Jr. katzjr@optonline.net Bob O’Brien recently returned from sailing his boat, Valhalla, from the Chesapeake to the U.S. Virgin Islands with a stop in Bermuda.

Whitney Russell continues to be wonderfully busy at Northampton High School as a special education teacher. He coached JV baseball in the spring and plans to coach football in the fall.

Peter Artaserse, Jr. PArtaser@aol.com Charles A. Fischbein cafpac@Earthlink.net Richard Thaler, a behavioral economist and a professor at the University of Chicago Booth School of Business, starred as himself in the movie The Big Short, based on Michael Lewis’ best-selling account of the ﬁnancial crisis. The ﬁlm was nominated for ﬁve Academy Awards, including Best Picture.

Michael R. Yogg michaelyogg@gmail.com Mark Belnick is excited to announce the arrival of his two new grandchildren, Owen Ben and Daisy Elizabeth. John Rubinstein is still active in his architectural practice and has done pro bono work for Newark Academy, but is now taking more time off for leisure and travel. John and Alice live in Bernardsville, near their two children and four grandchildren. Bill Sheppard is in his 49th year working in the railroad industry, formerly as an executive and now as a consultant, and has published several technical books in the ﬁeld. Some classmates remember him hanging around the Roseville Avenue station, checking on the trains as they went on to Dover or turned off onto the spur line to Montclair. Bill has three daughters and two grandsons. 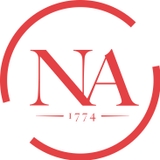