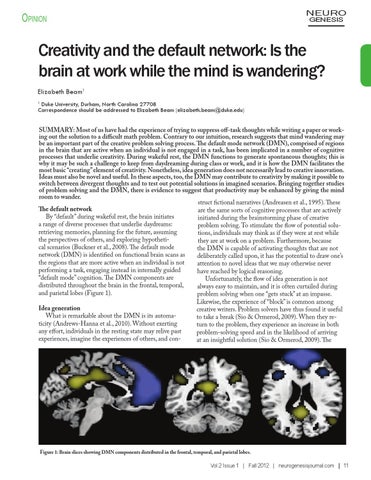 Creativity and the default network: Is the brain at work while the mind is wandering? Elizabeth Beam1 Duke University, Durham, North Carolina 27708 Correspondence should be addressed to Elizabeth Beam (elizabeth.beam@duke.edu) 1

SUMMARY: Most of us have had the experience of trying to suppress off-task thoughts while writing a paper or working out the solution to a difficult math problem. Contrary to our intuition, research suggests that mind wandering may be an important part of the creative problem solving process. The default mode network (DMN), comprised of regions in the brain that are active when an individual is not engaged in a task, has been implicated in a number of cognitive processes that underlie creativity. During wakeful rest, the DMN functions to generate spontaneous thoughts; this is why it may be such a challenge to keep from daydreaming during class or work, and it is how the DMN facilitates the most basic “creating” element of creativity. Nonetheless, idea generation does not necessarily lead to creative innovation. Ideas must also be novel and useful. In these aspects, too, the DMN may contribute to creativity by making it possible to switch between divergent thoughts and to test out potential solutions in imagined scenarios. Bringing together studies of problem solving and the DMN, there is evidence to suggest that productivity may be enhanced by giving the mind room to wander. struct fictional narratives (Andreasen et al., 1995). These The default network are the same sorts of cognitive processes that are actively By “default” during wakeful rest, the brain initiates initiated during the brainstorming phase of creative a range of diverse processes that underlie daydreams: problem solving. To stimulate the flow of potential soluretrieving memories, planning for the future, assuming tions, individuals may think as if they were at rest while the perspectives of others, and exploring hypothetithey are at work on a problem. Furthermore, because cal scenarios (Buckner et al., 2008). The default mode the DMN is capable of activating thoughts that are not network (DMN) is identified on functional brain scans as deliberately called upon, it has the potential to draw one’s the regions that are more active when an individual is not attention to novel ideas that we may otherwise never performing a task, engaging instead in internally guided have reached by logical reasoning. “default mode” cognition. The DMN components are Unfortunately, the flow of idea generation is not distributed throughout the brain in the frontal, temporal, always easy to maintain, and it is often curtailed during and parietal lobes (Figure 1). problem solving when one “gets stuck” at an impasse. Likewise, the experience of “block” is common among Idea generation creative writers. Problem solvers have thus found it useful What is remarkable about the DMN is its automato take a break (Sio &amp; Ormerod, 2009). When they reticity (Andrews-Hanna et al., 2010). Without exerting turn to the problem, they experience an increase in both any effort, individuals in the resting state may relive past problem-solving speed and in the likelihood of arriving experiences, imagine the experiences of others, and conat an insightful solution (Sio &amp; Ormerod, 2009). The 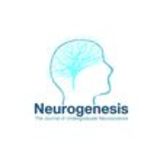