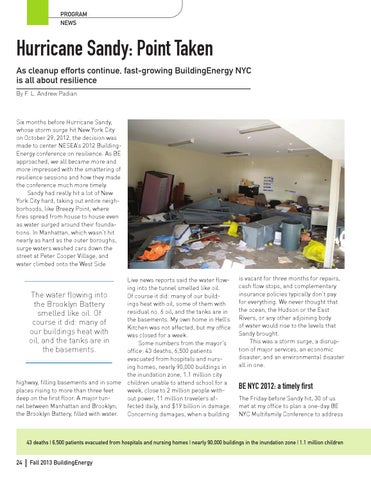 Six months before Hurricane Sandy, whose storm surge hit New York City on October 29, 2012, the decision was made to center NESEA’s 2012 BuildingEnergy conference on resilience. As BE approached, we all became more and more impressed with the smattering of resilience sessions and how they made the conference much more timely. Sandy had really hit a lot of New York City hard, taking out entire neighborhoods, like Breezy Point, where fires spread from house to house even as water surged around their foundations. In Manhattan, which wasn’t hit nearly as hard as the outer boroughs, surge waters washed cars down the street at Peter Cooper Village, and water climbed onto the West Side

The water flowing into the Brooklyn Battery smelled like oil. Of course it did: many of our buildings heat with oil, and the tanks are in the basements.

highway, filling basements and in some places rising to more than three feet deep on the first floor. A major tunnel between Manhattan and Brooklyn, the Brooklyn Battery, filled with water.

Live news reports said the water flowing into the tunnel smelled like oil. Of course it did: many of our buildings heat with oil, some of them with residual no. 6 oil, and the tanks are in the basements. My own home in Hell’s Kitchen was not affected, but my office was closed for a week. Some numbers from the mayor’s office: 43 deaths, 6,500 patients evacuated from hospitals and nursing homes, nearly 90,000 buildings in the inundation zone, 1.1 million city children unable to attend school for a week, close to 2 million people without power, 11 million travelers affected daily, and $19 billion in damage. Concerning damages, when a building

is vacant for three months for repairs, cash flow stops, and complementary insurance policies typically don’t pay for everything. We never thought that the ocean, the Hudson or the East Rivers, or any other adjoining body of water would rise to the levels that Sandy brought. This was a storm surge, a disruption of major services, an economic disaster, and an environmental disaster all in one.

BE NYC 2012: a timely first The Friday before Sandy hit, 30 of us met at my office to plan a one-day BE NYC Multifamily Conference to address 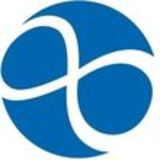 Volume 31, No. 2 This is the Fall Edition of the BuildingEnergy Magazine, the bi-annual publication of the Northeast Sustainable Energy Ass...

Volume 31, No. 2 This is the Fall Edition of the BuildingEnergy Magazine, the bi-annual publication of the Northeast Sustainable Energy Ass...