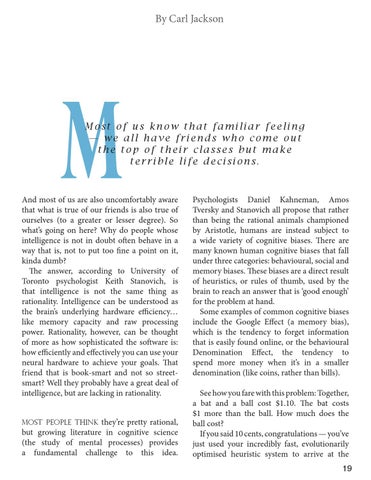 Most of us know that familiar feeling — we all have friends who come out the top of their classes but make terrible life decisions.

And most of us are also uncomfortably aware that what is true of our friends is also true of ourselves (to a greater or lesser degree). So what’s going on here? Why do people whose intelligence is not in doubt often behave in a way that is, not to put too fine a point on it, kinda dumb? The answer, according to University of Toronto psychologist Keith Stanovich, is that intelligence is not the same thing as rationality. Intelligence can be understood as the brain’s underlying hardware efficiency… like memory capacity and raw processing power. Rationality, however, can be thought of more as how sophisticated the software is: how efficiently and effectively you can use your neural hardware to achieve your goals. That friend that is book-smart and not so streetsmart? Well they probably have a great deal of intelligence, but are lacking in rationality. Most people think they’re pretty rational,

but growing literature in cognitive science (the study of mental processes) provides a fundamental challenge to this idea.

Psychologists Daniel Kahneman, Amos Tversky and Stanovich all propose that rather than being the rational animals championed by Aristotle, humans are instead subject to a wide variety of cognitive biases. There are many known human cognitive biases that fall under three categories: behavioural, social and memory biases. These biases are a direct result of heuristics, or rules of thumb, used by the brain to reach an answer that is ‘good enough’ for the problem at hand. Some examples of common cognitive biases include the Google Effect (a memory bias), which is the tendency to forget information that is easily found online, or the behavioural Denomination Effect, the tendency to spend more money when it’s in a smaller denomination (like coins, rather than bills). See how you fare with this problem: Together, a bat and a ball cost $1.10. The bat costs $1 more than the ball. How much does the ball cost? If you said 10 cents, congratulations — you’ve just used your incredibly fast, evolutionarily optimised heuristic system to arrive at the 19

Nerve Magazine is a student-run science, technology and engineering magazine based out of Queen's University. 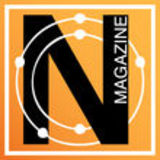