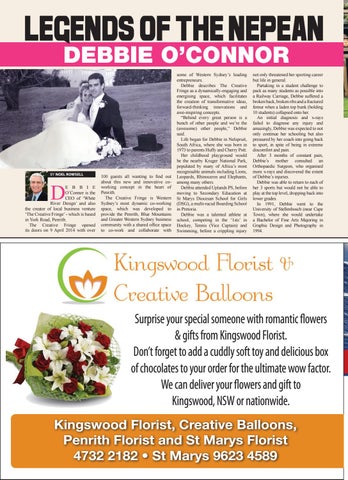 Legends of the Nepean Debbie O’Connor

e bb i e O’Connor is the CEO of ‘White River Design’ and also the creator of local business venture ‘The Creative Fringe’ - which is based in York Road, Penrith. The Creative Fringe opened its doors on 9 April 2014 with over

100 guests all wanting to find out about this new and innovative coworking concept in the heart of Penrith. The Creative Fringe is Western Sydney’s most dynamic co-working space, which was developed to provide the Penrith, Blue Mountains and Greater Western Sydney business community with a shared office space to co-work and collaborate with

some of Western Sydney’s leading entrepreneurs. Debbie describes The Creative Fringe as a dynamically-engaging and energising space, which facilitates the creation of transformative ideas, forward-thinking innovations and awe-inspiring concepts. “Behind every great person is a bunch of other people and we’re the (awesome) other people,” Debbie said. Life began for Debbie in Nelspruit, South Africa, where she was born in 1973 to parents Huffy and Cherry Pott. Her childhood playground would be the nearby Kruger National Park, populated by many of Africa’s most recognisable animals including Lions, Leopards, Rhinoceros and Elephants, among many others. Debbie attended Uplands PS, before moving to Secondary Education at St Marys Diocesan School for Girls (DSG), a multi-racial Boarding School in Pretoria. Debbie was a talented athlete at school, competing in the ‘1sts’ in Hockey, Tennis (Vice Captain) and Swimming, before a crippling injury

not only threatened her sporting career but life in general. Partaking in a student challenge to pack as many students as possible into a Railway Carriage, Debbie suffered a broken back, broken ribs and a fractured femur when a laden top bunk (holding 10 students) collapsed onto her. An initial diagnosis and x-rays failed to diagnose any injury and amazingly, Debbie was expected to not only continue her schooling but also pressured by her coach into going back to sport, in spite of being in extreme discomfort and pain. After 3 months of constant pain, Debbie’s mother consulted an Orthopaedic Surgeon, who organised more x-rays and discovered the extent of Debbie’s injuries. Debbie was able to return to each of her 3 sports but would not be able to play at the top level, dropping back into lower grades. In 1991, Debbie went to the University of Stellenbosch (near Cape Town), where she would undertake a Bachelor of Fine Arts Majoring in Graphic Design and Photography in 1994.

Surprise your special someone with romantic flowers & gifts from Kingswood Florist. Don’t forget to add a cuddly soft toy and delicious box of chocolates to your order for the ultimate wow factor. We can deliver your flowers and gift to Kingswood, NSW or nationwide. Kingswood Florist, Creative Balloons, Penrith Florist and St Marys Florist 4732 2182 • St Marys 9623 4589