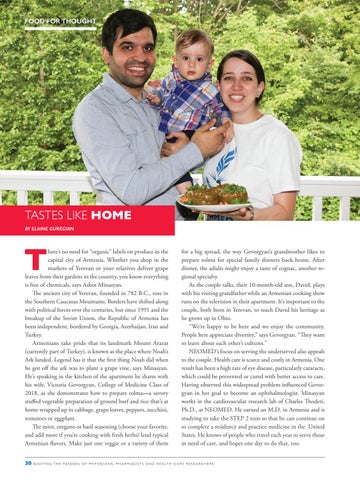 here’s no need for “organic” labels on produce in the capital city of Armenia. Whether you shop in the markets of Yerevan or your relatives deliver grape leaves from their gardens in the country, you know everything is free of chemicals, says Ashot Minasyan. The ancient city of Yerevan, founded in 782 B.C., rose in the Southern Caucasus Mountains. Borders have shifted along with political forces over the centuries, but since 1991 and the breakup of the Soviet Union, the Republic of Armenia has been independent, bordered by Georgia, Azerbaijan, Iran and Turkey. Armenians take pride that its landmark Mount Ararat (currently part of Turkey), is known as the place where Noah’s Ark landed. Legend has it that the first thing Noah did when he got off the ark was to plant a grape vine, says Minasyan. He’s speaking in the kitchen of the apartment he shares with his wife, Victoria Gevorgyan, College of Medicine Class of 2018, as she demonstrates how to prepare tolma—a savory stuffed vegetable preparation of ground beef and rice that’s at home wrapped up in cabbage, grape leaves, peppers, zucchini, tomatoes or eggplant. The mint, oregano or basil seasoning (choose your favorite, and add more if you’re cooking with fresh herbs) lend typical Armenian flavors. Make just one veggie or a variety of them 30 I G N I T I N G

for a big spread, the way Gevorgyan’s grandmother likes to prepare tolma for special family dinners back home. After dinner, the adults might enjoy a taste of cognac, another regional specialty. As the couple talks, their 10-month-old son, David, plays with his visiting grandfather while an Armenian cooking show runs on the television in their apartment. It’s important to the couple, both born in Yerevan, to teach David his heritage as he grows up in Ohio. “We’re happy to be here and we enjoy the community. People here appreciate diversity,’’ says Gevorgyan. “They want to learn about each other’s cultures.’’ NEOMED’s focus on serving the underserved also appeals to the couple. Health care is scarce and costly in Armenia. One result has been a high rate of eye disease, particularly cataracts, which could be prevented or cured with better access to care. Having observed this widespread problem influenced Gevorgyan in her goal to become an ophthalmologist. Minasyan works in the cardiovascular research lab of Charles Thodeti, Ph.D., at NEOMED. He earned an M.D. in Armenia and is studying to take the STEP 2 tests so that he can continue on to complete a residency and practice medicine in the United States. He knows of people who travel each year to serve those in need of care, and hopes one day to do that, too.