Hard to Describe - By Neil Nelson 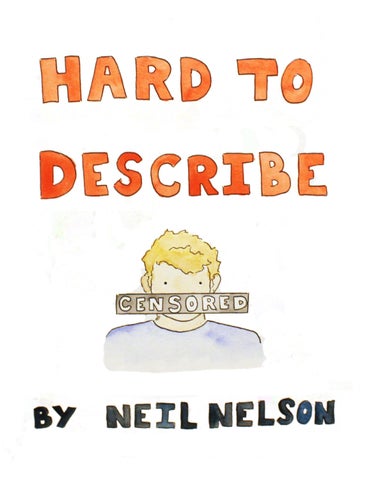 ...in the good ways. I take the blame for the rest.

DISCLAIMER I›m seeking a provisional patent for my thesis work so this book is a little different. I can›t talk about the details so I talk about the journey, which in its own way is more interesting anyhow.

I started my thesis in virtual reality,

excited by the potential of the technology. I looked into the opportunities to improve

human centered systems, information sharing, accessibility and efficiency within the space through developing novel hardware. Also, I thought it was really cool.

Designing something that doesn’t exist is

In industrial design we have a technique called benchmarking, looking at similar

designs for comparison. If you want to make a chair, you look at other chairs.

For something novel there aren’t direct

objects to compare to but there are still pieces which we can use.

There are ways to form a silhouette of the

design through understanding some features that must be incorporated.

If you are making something for the hand,

you can use the average count of five fingers.

From there you build on the constraints which best fits the need and ability to produce.

At some point along the way the idea of

“It’ll be fine” stuck. The good and bad I ran

into was part of the process of learning and appreciating.

If something broke, it showed me a place to

reinforce it. If it worked well, it showed where the design was a success.

Even if I solved the problem, it didn’t

mean it was right. Often I would solve,

learn, and solve again. As I did even the question I was asking would grow and change.

In the middle, where good and bad meet, I was building toward something better.

In the middle of the semester, I decided to

do a little project for my friend Paul. An N of 1

experiment to see if I could make a client based project in an area I wasn’t familiar with. In this case it was developing electronic equipment for a guitar player.

I thought he might want a portable, 3-d printed guitar with a speaker built in.

It turned out he wanted an effects

controller he could use with his hand,

something like an expression pedal but attached to the guitar.

designed before... and I only had 2 weeks. To start I looked at the ways people controlled guitar sound, what the

electronics did, and what was inside them.

The parts drawings and schematics are

simple to some, but for me understanding them took patience. I needed to discern them if I wanted to know how the parts

worked together and where I needed to start.

The soldering, fabricating and interface ergonomics I knew, but the guts inside took a little time.

It may be difficult but I wanted to try. I might struggle, get hurt, but being bad at something is the first step toward being kinda good at it.

If I don’t push through, I won’t be reaching for my potential and that feeling is worse than trying and failing.

I will likely live and improve upon what was there the day before.

soldering, and the “ Apollo “ was ready to be shipped for testing.

It was not what I thought I was going to

design when I started but it was a success, and Being able to tackle the project gave me more confidence in my capabilities.

I named the device the Apollo, after my friend Paul, who has always been a ray of sunshine. If you’d like to see the first tests, aim your

phone camera at the square below. Since then it

has made its way into albums and performances.

The QWERTY keyboard has been around for

a 150 years. It has become the infrastructure on which typing systems are passed on from one user to the next, keeping it alive.

To think our designs will be around

for a century is optimistic; to overlook that they could be is neglectful.

I try to be mindful of how my designs fit into the world around them, how both the outside will affect and be affectd by my work.

If only we could know how it will turn out on the other side.

XR is a new frontier of technology, being

innovated each day by billion dollar companies. I am one man with a background in bicycles and bronze sculpture.

Advancements were coming out so quickly, I

found myself endlessly scrolling on my phone, looking for news and opinions of the technology.

I adjusted my direction three times over the course of my Thesis, because of how quickly everything was evolving around me.

My project began as a speculative design

and became something tangible and tested.

The final product had more potential than I expected, it can be used by nearly

anyone to have a more efficient interface

with technology, from phones to xr systems. It wasn’t easy. It took research, piles of parts, lots of time, and clever minds to bounce ideas off of,

which I was grateful to be surrounded by. In the end my hardware was called a “blank canvas” of possibilities.

It could also be built with existing mass

At an advisor meeting, I was told to stop

talking about the project. Due to the relevance

of the design in the current ecosystem, the tech evolving around me by companies, I should look into pursuing a patent.

Hesitant, I booked meetings with other faculty

for advice. All I spoke to agreed: I should try and protect the intellectual property of the project.

It was challenging and scary but after a lot of

time alone at home thinking about it, I decided to try.

Even if nothing came of it, it was worth the

learning experience if my goal was to be an industrial designer.

Not all ideas are perfect at the beginning,

mine certainly wasn’t, It just need some time.

The feedback and appreciation of ideas can help them suceed.

Rather than be another forgotten project.

When I take a step back, I think about why

I decided to go to RISD in the first place.

I think of when I built a house with

my father, blacksmithed, made art and furniture, and my own tools. All of it

design and craft, all of it stepping stones toward where I am now.

I think back to the interviewers who wanted to see a degree, a ticket to making it to the next round.

I had the potential then, but needed to prove myself.

My goal was to balance my skills. My first day in class I was told “Take the

courses you might struggle in for the chance to expand your toolbox”.

I had experience building and fixing but

needed to learn the skills most relevant to the field.

I took every software and coding course I

could. I was fortunate enough to be part of a product design course at MIT and the Harvard Buisness School Core program, thanks to RISD’s partnerships. All of it was a struggle. All of it helped me to be a better designer.

My project is finished. My thesis defended. Handshakes have been received. Soon I’ll be back to the real world.

Soon it will be time to find a job

that fits me, or that I fit into.

I have been told my best asset is my perspective. I mean, who watercolors

an entire book when the project is a

I’ll make sure to list it on my resume.

Hard to Describe - By Neil Nelson 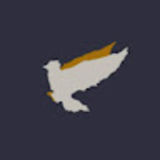