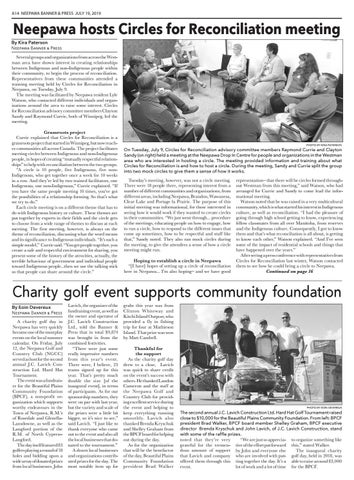 Several groups and organizations from across the Westman area have shown interest in creating relationships between Indigenous and non-Indigenous people within their community, to begin the process of reconciliation. Representatives from these communities attended a training meeting held by Circles for Reconciliation in Neepawa, on Tuesday, July 9. The meeting was facilitated by Neepawa resident Lyle Watson, who contacted different individuals and organizations around the area to raise some interest. Circles for Reconciliation advisory committee members Clayton Sandy and Raymond Currie, both of Winnipeg, led the meeting. Grassroots project Currie explained that Circles for Reconciliation is a grassroots project that started in Winnipeg, but now reaches communities all across Canada. The project facilitates meeting circles between Indigenous and non-Indigenous people, in hopes of creating “mutually respectful relationships” to help with reconciliation between the two groups. “A circle is 10 people, five Indigenous, five nonIndigenous, who get together once a week for 10 weeks in a row. And they’re led by two trained facilitators, one Indigenous, one non-Indigenous,” Currie explained. “If you have the same people meeting 10 times, you’ve got the possibilities of a relationship forming. So that’s what we try to do.” Each circle meeting is on a different theme that has to do with Indigenous history or culture. These themes are put together by experts in their fields and the circle gets to choose from a wide range of themes to discuss at each meeting. The first meeting, however, is always on the theme of reconciliation, discussing what the word means and its significance to Indigenous individuals. “It’s such a simple model,” Currie said. “You get people together, you create a safe and respectful environment for sharing, you present some of the history of the atrocities, actually, the terrible behaviour of government and individual people toward Indigenous people...then we use the talking stick so that people can share around the circle.”

On Tuesday, July 9, Circles for Reconciliation advisory committee members Raymond Currie and Clayton Sandy (on right) held a meeting at the Neepawa Drop In Centre for people and organizations in the Westman area who are interested in hosting a circle. The meeting provided information and training about what Circles for Reconciliation is and how to host a circle. During the meeting, Sandy and Currie split the group into two mock circles to give them a sense of how it works.

Tuesday’s meeting, however, was not a circle meeting. There were 18 people there, representing interest from a number of different communities and organizations, from different areas, including Neepawa, Brandon, Wawanesa, Clear Lake and Portage la Prairie. The purpose of this initial meeting was informational, for those interested in seeing how it would work if they wanted to create circles in their communities. “We just went through... procedure of the meetings, educating people on how to engage, how to run a circle, how to respond to the different issues that come up sometimes, how to be respectful and stuff like that,” Sandy noted. They also ran mock circles during the meeting, to give the attendees a sense of how a circle meeting might run. Hoping to establish a circle in Neepawa “[I have] hopes of setting up a circle of reconciliation here in Neepawa... I’m also hoping– and we have good

representation– that there will be circles formed throughout Westman from this meeting,” said Watson, who had arranged for Currie and Sandy to come lead the informational meeting. Watson noted that he was raised in a very multicultural community, which is what started his interest in Indigenous culture, as well as reconciliation. “I had the pleasure of going through high school getting to know, experiencing fellow classmates from all over Manitoba, from reserves and the Indigenous culture. Consequently, I got to know them and that’s what reconciliation is all about, is getting to know each other,” Watson explained. “And I’ve seen some of the impact of residential schools and things that have happened over the years.” After seeing a press conference with representatives from Circles for Reconciliation last winter, Watson contacted them to see how he could bring a circle to Neepawa. Continued on page 16

A charity golf day in Neepawa has very quickly become one of the must play events on the local summer calendar. On Friday, July 12, the Neepawa Golf and Country Club (NGCC) served as host for the second annual J.C. Lavich Construction Ltd. Hard Hat Tournament. The event was a fundraiser for the Beautiful Plains Community Foundation (BPCF), a non-profit organization which supports worthy endeavours in the Town of Neepawa, R.M.’s of Rosedale and GlenellaLansdowne, as well as the Langford portion of the R.M. of North CypressLangford. The day itself featured 83 golfers playing a round of 18 holes and bidding upon a wide array of donated prizes from local businesses. John

Lavich, the organizer of the fundraising event, as well as the owner and operator of J.C. Lavich Construction Ltd., told the Banner & Press that in total $9,874 was brought in from the combined festivities. “There were just some really impressive numbers from this year’s event. There were, I believe, 23 teams signed up for this year. That’s pretty much double the size [of the inaugural event], in terms of participants. As for our sponsorship numbers, they were on par with last year, but the variety and scale of the prizes were a little bit bigger, so it’s nice to see,” said Lavich. “I just like to thank everyone who came out to the event and also all the local businesses that donated to the tournament.” A dozen local businesses and organizations contributed prizes for the day. The most notable item up for

grabs this year was from Clinton Whiteway and Kitchi Island Outpost, who provided a fly in fishing trip for four at Mathieson Island. That prize was won by Matt Cambell.

Thankful for the support As the charity golf day drew to a close, Lavich was quick to share credit on the event’s success with others. He thanked Landon Cameron and the staff at the Neepawa Golf and Country Club for providing excellent service during the event and helping to keep everything running smoothly. Lav ich also thanked Brenda Kryschuk and Shelley Graham from the BPCF board for helping out during the day. As for the organization that will be the benefactor of the day, Beautiful Plains Community Foundation president Brad Walker

noted that they’re very grateful for the tremendous amount of support that Lavich and company offered them through this event.

“We are just so appreciative of the effort put forward by John and everyone else who are involved with putting together the day. It’s a lot of work and a lot of time

to organize something like this,” stated Walker. The inaugural charity golf day, held in 2018, was able to raise around $3,000 for the BPCF. 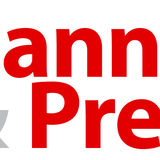 In this week's paper, read about Neepawa Council's discussion of the perpetual care at Riverside Cemetery, the charity golf event and where...

In this week's paper, read about Neepawa Council's discussion of the perpetual care at Riverside Cemetery, the charity golf event and where...