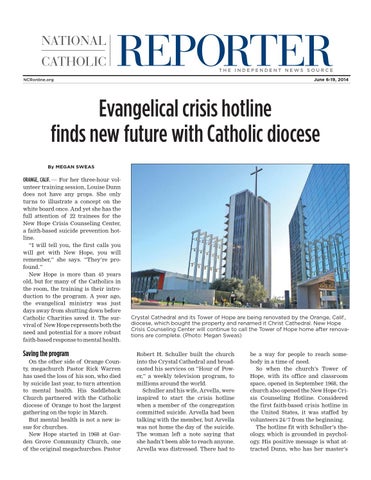 ORANGE, CALIF. — For her three-hour volunteer training session, Louise Dunn does not have any props. She only turns to illustrate a concept on the white board once. And yet she has the full attention of 22 trainees for the New Hope Crisis Counseling Center, a faith-based suicide prevention hotline. “I will tell you, the first calls you will get with New Hope, you will remember,” she says. “They’re profound.” New Hope is more than 45 years old, but for many of the Catholics in the room, the training is their introduction to the program. A year ago, the evangelical ministry was just days away from shutting down before Catholic Charities saved it. The survival of New Hope represents both the need and potential for a more robust faith-based response to mental health.

Saving the program On the other side of Orange County, megachurch Pastor Rick Warren has used the loss of his son, who died by suicide last year, to turn attention to mental health. His Saddleback Church partnered with the Catholic diocese of Orange to host the largest gathering on the topic in March. But mental health is not a new issue for churches. New Hope started in 1968 at Garden Grove Community Church, one of the original megachurches. Pastor

Crystal Cathedral and its Tower of Hope are being renovated by the Orange, Calif., diocese, which bought the property and renamed it Christ Cathedral. New Hope Crisis Counseling Center will continue to call the Tower of Hope home after renovations are complete. (Photo: Megan Sweas)

Robert H. Schuller built the church into the Crystal Cathedral and broadcasted his services on “Hour of Power,” a weekly television program, to millions around the world. Schuller and his wife, Arvella, were inspired to start the crisis hotline when a member of the congregation committed suicide. Arvella had been talking with the member, but Arvella was not home the day of the suicide. The woman left a note saying that she hadn’t been able to reach anyone. Arvella was distressed. There had to

be a way for people to reach somebody in a time of need. So when the church’s Tower of Hope, with its office and classroom space, opened in September 1968, the church also opened the New Hope Crisis Counseling Hotline. Considered the first faith-based crisis hotline in the United States, it was staffed by volunteers 24/7 from the beginning. The hotline fit with Schuller’s theology, which is grounded in psychology. His positive message is what attracted Dunn, who has her master’s

degree in counseling, to the church. Dunn started volunteering with New Hope within a year of joining the church, and was soon hired. She was drawn to the ministry because her roommate and best friend had committed suicide. “When loved ones lose somebody to suicide, you feel so guilty. ‘I should have known,’ or ‘I did know and I didn’t do enough.’ I went through every bit of that,” Dunn said. “I couldn’t help her, but maybe I can help somebody else.” When Dunn first volunteered with New Hope, 45 people were in her training session. At its height, 250 volunteers staffed New Hope’s 10 phone lines in four-hour shifts, with multiple people on busy shifts. The program’s recruiting base, Crystal Cathedral’s congregation, was 10,000 strong. Callers from around the country found out about the hotline by watching “Hour of Power.” Counselors fielded 80 to 90 calls a day. But by the late 2000s, Crystal Cathedral was falling apart, plagued by financial and management troubles. The congregation shrunk, and the church was forced to sell its iconic campus. New Hope shrank to 100 volunteers, and call volume dropped by 50 percent. Many thought it had closed with the downfall of the church, Dunn said. The Orange diocese, in the market for a new cathedral, bought the property, and it leased out one of its parishes to the evangelical church, renamed Shepherd’s Grove. As the evangelical church prepared to move out last summer, Dunn started seeing signs that New Hope would not be moving with it. First, the leadership didn’t take her to visit the new business offices. Then, New Hope did not receive any moving labels. Despite the uncertainty, Dunn and her volunteer counselors kept work-

ing as Catholic officials started moving in. “We kept saying, ‘We can’t believe that God would shut us down because what we do is so important,’ ” Dunn said. Dunn met Fr. Christopher Smith, who as episcopal vicar for the new Christ Cathedral, was charged with the transition process. When Smith found out about New Hope, he thought it would be great for the Catholic church to have such a program. The diocese didn’t have a place in its structure for it, so Fr. Smith took the issue to his sister, Teresa Smith, executive director of Catholic Charities of Orange County. “It seemed to me like a perfect fit,” said Teresa Smith, a licensed therapist herself. “The telephone hotline was a service we did not provide at Catholic Charities, but one that certainly fell into our overall mission. The only question was money. Teresa Smith had just two weeks to come up with the funds needed. On the second week, Dunn was still hanging on to hope, trying to hold off the movers until the last minute. She had her layoff papers and was debating over whether to shred the counselor files. Her volunteer administrative assistant sat down on Tuesday and said, “I’m not packing another box.” Packing up meant she didn’t believe that God would save the program, she explained to Dunn. On Wednesday, Dunn left work an hour early, unsure of what else she could do. On her way out, she ran in to Fr. Smith. A huge smile came over his face. They had the money. Bishop Kevin Vann personally authorized a grant to Catholic Charities to save New Hope until the next fiscal year, giving Catholic Charities a chance to raise funds to cover it. “Literally snatched out of being shut down and gone forever,” Dunn said. It was “perfectly orchestrated

by God.” “We considered it a miracle,” she said.

God’s intervention Dunn believes in God’s intervention because she’s seen it. On her first suicide call with New Hope, she followed through all the proper steps to help the caller find the hope to keep living. Nothing was working. “I just shot up this prayer, ‘Lord, please just bring some light in, just a little bit of light,’ ” she recalled. “And honest to goodness, as I said that, the caller says, “Oh my God! I can see what I need to do.’ ” Typically, a suicide call like this might end well when the caller pledges not to hurt herself, but on this call, the woman ended it excited to wake up the next day. “For me as a person of faith, I can tell you that nothing I did impacted that individual, but when I shot that prayer up, God answered it immediately,” Dunn said. “It was beyond my skills as a crisis interventionist.” As a Christian crisis hotline, New Hope fills a particular niche. Callers often want to talk about their lives from a perspective of faith. Not all callers have a mental illness; most are dealing with relationship problems, grief and loneliness, or financial concerns. At the end of each call, the volunteer counselor asks to pray with the caller. Even when they doubt God’s existence, are angry with God, or can’t feel God’s love, the callers often say yes to prayer, Dunn says. During her afternoon shift, volunteer counselor Maxine Pfeiler talks to a pastor who is struggling with depression and feels like God has left him. She sits in a cozy cubicle in the basement under the Christ Cathedral, New Hope’s temporary home while the Tower of Hope is renovated. Each of the four cubicles has a computer, phone and various resources, includ-

ing a Bible. Counselors also can look up verses by situation or emotion in The Billy Graham Christian Worker’s Handbook. Pfieler, an 11-year veteran of the program, was a registered nurse and licensed marriage and family therapist before retiring. After years of not being able to pray with clients, she says she values the ability to bring God into the conversation. Catholic Charities of Orange County has a psychological counseling department serving the mental health needs of the low-income community. The therapists do not initiate conversations about faith but respond to the desires of the client, says Teresa Smith. “Best practice in therapy guides us to meet our clients where they are.” New Hope trains its volunteers in active listening and crisis intervention, but most are not experts in counseling. The spiritual dialogue and prayer involved in New Hope’s crisis counseling work is “a special dynamic for Catholic Charities to be able to share,” Teresa Smith said. Despite its evangelical roots, the hotline isn’t about preaching to or converting people, Dunn says. Rather, counselors serve as “the representative of a loving God.” Faith is also an important resource to the volunteers, especially when

calls do not go well. Only 1 to 3 percent of calls are suicide calls, but they are stressful. Those who call into a hotline are looking for a way out, Dunn says, but if a caller hangs up, there’s sometimes no way to know what happens to them. The counselors have to trust that God continues to be with the person after the phone call. Each call ends with a prayer of release, and Dunn counsels her volunteers not to take callers home with them in their hearts and minds. “My thing is connecting them with the Lord,” Pfeiler said. “You have the Holy Spirit in your heart and your soul and he’s not ever going to leave you.”

Room for growth New Hope often attracts long-term volunteers like Pfeiler. One volunteer, now in her 90s, started in 1969. As faithful as the volunteers are, though, the program needs to add to its aging ranks. Many of the trainees at the May session came from Catholic Charities’ Women’s Auxiliary or found out about the program from flyers handed out in the parishes. A group that ministers to the sick at the UC Irvine Medical Center also asked to participate in the training. Being part of the Catholic church

presents New Hope with new opportunities, Dunn says. In addition to being a source for both volunteers and callers, New Hope may be able to expand its impact, training ministers on how to respond to mental health issues. Cynthia and Miguel Sanchez thought the training would help them with their work in their parish. Miguel is a newly ordained deacon, and parishioners often ask them for advice, particularly married couples with relationship problems. New Hope counselors tend to be “the people that individuals gravitate to,” Dunn told the class. They’re caring and compassionate, and get joy out of talking people through their pain. Hearing a caller improve over the course of a call “is like a high,” she added. Dunn would like to see four people on every shift, and Catholic Charities has set goals of starting lines dedicated to Spanish and Vietnamese speakers. As an “evangelical in the midst of the diocese,” Dunn said she is excited to see New Hope add new services. “I anticipate New Hope being around for a very long time,” she said. [Megan Sweas is a freelance journalist based in Los Angeles.] 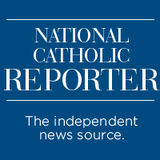