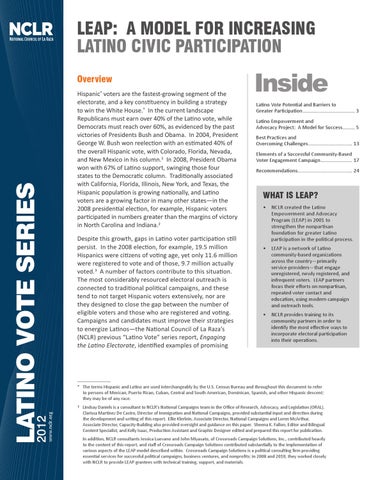 Overview Hispanic* voters are the fastest-growing segment of the electorate, and a key constituency in building a strategy to win the White House.† In the current landscape Republicans must earn over 40% of the Latino vote, while Democrats must reach over 60%, as evidenced by the past victories of Presidents Bush and Obama. In 2004, President George W. Bush won reelection with an estimated 40% of the overall Hispanic vote, with Colorado, Florida, Nevada, and New Mexico in his column.1 In 2008, President Obama won with 67% of Latino support, swinging those four states to the Democratic column. Traditionally associated with California, Florida, Illinois, New York, and Texas, the Hispanic population is growing nationally, and Latino voters are a growing factor in many other states—in the 2008 presidential election, for example, Hispanic voters participated in numbers greater than the margins of victory in North Carolina and Indiana.2 Despite this growth, gaps in Latino voter participation still persist. In the 2008 election, for example, 19.5 million Hispanics were citizens of voting age, yet only 11.6 million were registered to vote and of those, 9.7 million actually voted.3 A number of factors contribute to this situation. The most considerably resourced electoral outreach is connected to traditional political campaigns, and these tend to not target Hispanic voters extensively, nor are they designed to close the gap between the number of eligible voters and those who are registered and voting. Campaigns and candidates must improve their strategies to energize Latinos—the National Council of La Raza’s (NCLR) previous “Latino Vote” series report, Engaging the Latino Electorate, identified examples of promising

WHAT IS LEAP? • NCLR created the Latino Empowerment and Advocacy Program (LEAP) in 2001 to strengthen the nonpartisan foundation for greater Latino participation in the political process. • LEAP is a network of Latino community-based organizations across the country—primarily service-providers—that engage unregistered, newly registered, and infrequent voters. LEAP partners focus their efforts on nonpartisan, repeated voter contact and education, using modern campaign and outreach tools. • NCLR provides training to its community partners in order to identify the most effective ways to incorporate electoral participation into their operations.

* The terms Hispanic and Latino are used interchangeably by the U.S. Census Bureau and throughout this document to refer to persons of Mexican, Puerto Rican, Cuban, Central and South American, Dominican, Spanish, and other Hispanic descent; they may be of any race. † Lindsay Daniels is a consultant to NCLR’s National Campaigns team in the Office of Research, Advocacy, and Legislation (ORAL). Clarissa Martínez De Castro, Director of Immigration and National Campaigns, provided substantial input and direction during the development and writing of this report. Ellie Klerlein, Associate Director, National Campaigns and Loren McArthur, Associate Director, Capacity-Building also provided oversight and guidance on this paper. Sheena K. Fallon, Editor and Bilingual Content Specialist, and Kelly Isaac, Production Assistant and Graphic Designer edited and prepared this report for publication. In addition, NCLR consultants Jessica Luevano and John Miyasato, of Crossroads Campaign Solutions, Inc., contributed heavily to the content of this report, and staff of Crossroads Campaign Solutions contributed substantially to the implementation of various aspects of the LEAP model described within. Crossroads Campaign Solutions is a political consulting firm providing essential services for successful political campaigns, business ventures, and nonprofits; in 2008 and 2010, they worked closely with NCLR to provide LEAP grantees with technical training, support, and materials. 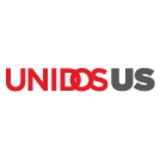 NCLR created the Latino Empowerment and Advocacy Program (LEAP) in 2001 to strengthen the nonpartisan foundation for greater Latino particip...

NCLR created the Latino Empowerment and Advocacy Program (LEAP) in 2001 to strengthen the nonpartisan foundation for greater Latino particip...