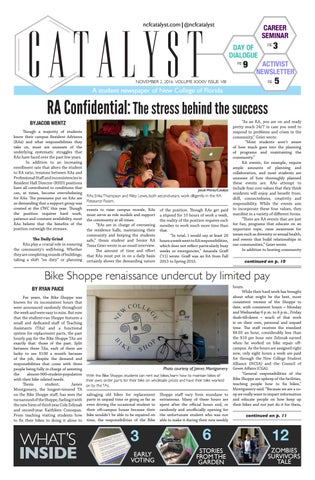 RA Confidential: The stress behind the success

Though a majority of students know their campus Resident Advisors (RAs) and what responsibilities they take on, most are unaware of the underlying systematic struggles that RAs have faced over the past few years. In addition to an increasing enrollment rate that alters the student to RA ratio, tensions between RAs and Professional Staff and inconsistencies in Resident Hall Director (RHD) positions have all contributed to conditions that can, at times, become overwhelming for RAs. The pressures put on RAs are so demanding that a support group was created at the CWC this year. Though the position requires hard work, patience and constant availability, most RAs believe that the benefits of the position outweigh the stresses. The Daily Grind RAs play a crucial role in ensuring the community’s well-being. Whether they are completing rounds of buildings, taking a shift “on duty” or planning

events to raise campus morale, RAs must serve as role models and support the community at all times. “RAs are in charge of overseeing the residence halls, maintaining their community and keeping the students safe,” thesis student and Senior RA Tessa Geier wrote in an email interview. The amount of time and effort that RAs must put in on a daily basis certainly shows the demanding nature

of the position. Though RAs get paid a stipend for 10 hours of work a week, the reality of the position requires each member to work much more time than that. “In total, I would say at least 20 hours a week went to RA responsibilities, which does not reflect particularly busy weeks or emergencies,” Amanda Graff (’11) wrote. Graff was an RA from Fall 2013 to Spring 2015.

“As an RA, you are on and ready pretty much 24/7 in case you need to respond to problems and crises in the community,” Geier wrote. “Most students aren’t aware of how much goes into the planning of programs and maintaining the community.” RA events, for example, require ample amounts of planning and collaboration, and most students are unaware of how thoroughly planned these events are. RAs attempt to include four core values that they think residents will enjoy and benefit from: skill, connectedness, creativity and responsibility. While the events aim to incorporate these four values, they manifest in a variety of different forms. “There are RA events that are just for fun, programs that educate on an important topic, raise awareness for issues such as diversity or sexual health, and events that build relationships in our communities,” Geier wrote. In addition to hosting community

Bike Shoppe renaissance undercut by limited pay BY RYAN PAICE For years, the Bike Shoppe was known for its inconsistent hours that were announced randomly throughout the week and were easy to miss. But now that the student-run Shoppe features a small and dedicated staff of Teaching Assistants (TAs) and a functional system for replacement parts, the past hourly pay for the Bike Shoppe TAs are exactly that: those of the past. Split between three TAs, each of them are lucky to see $100 a month because of the job, despite the demand and responsibilities that come with three Photo courtesy of James Montgomery people being fully in charge of assisting the almost-900-student-population With the Bike Shoppe, students can rent out bikes, learn how to maintain bikes of with their bike related needs. their own, order parts for their bike on wholesale prices and have their bike worked Thesis student, James on by the TAs. Montgomery, the longest-tenured TA on the Bike Shoppe staff, has seen the salvaging old bikes for replacement Shoppe staff vary from mundane to turnaround of the Shoppe, fueling it with parts in unpaid time or going as far as extraneous. Many of these hours are the new hires of third-year Cole Zelznak even driving the occasional student to spent after the official hours end, or and second-year Kaithleen Conoepan. their off-campus house because their randomly and unofficially opening for From teaching visiting students how bike wouldn’t be able to be repaired on the unfortunate student who was not to fix their bikes to doing it alone to time, the responsibilities of the Bike able to make it during their new weekly

STORIES FROM THE GARDEN

hours. While their hard work has brought about what might be the best, most consistent version of the Shoppe to date, with consistent hours – Monday and Wednesday 6 p.m. to 8 p.m., Friday dusk-till-dawn – much of that work is on their own, personal and unpaid time. The staff receives the standard $8.05 an hour, considerably less than the $10 per hour rate Zelznak earned when he worked on bike repair offcampus. As the hours are assigned right now, only eight hours a week are paid for through the New College Student Alliance (NCSA) and the Council of Green Affairs (CGA). “General responsibilities of the Bike Shoppe are upkeep of the facilities, teaching people how to fix bikes,” Montgomery said. “Because we are a coop we really want to impart information and educate people on how keep up their bikes and not just do it for them,