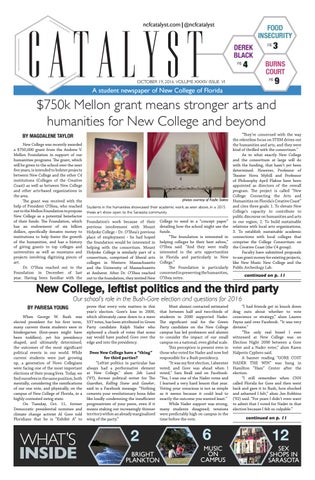 $750k Mellon grant means stronger arts and humanities for New College and beyond BY MAGDALENE TAYLOR New College was recently awarded a $750,000 grant from the Andrew V. Mellon Foundation in support of our humanities programs. The grant, which will be given to the school over the next five years, is intended to bolster projects between New College and the other C4 institutions (Colleges of the Creative Coast) as well as between New College and other arts-based organizations in the area. The grant was received with the help of President O’Shea, who reached out to the Mellon Foundation to propose New College as a potential benefactor of their funds. The Foundation, which has an endowment of six billion dollars, specifically donates money to institutions to help foster the growth of the humanities, and has a history of giving grants to top colleges and universities as well as museums and projects involving digitizing pieces of art. Dr. O’Shea reached out to the Foundation in December of last year. Having been familiar with the

Students in the humanities showcased their academic work, as seen above, in a 2015 thesis art show open to the Sarasota community.

Foundation’s work because of their previous involvement with Mount Holyoke College - Dr. O’Shea’s previous place of employment - he had hoped the foundation would be interested in helping with the consortium. Mount Holyoke College is similarly part of a consortium, comprised of liberal arts colleges in Western Massachusetts and the University of Massachusetts at Amherst. After Dr. O’Shea reached out to the foundation, they invited New

College to send in a “concept paper” detailing how the school might use the funds. “The foundation is interested in helping colleges be their best selves,” O’Shea said. “And they were really interested in the arts opportunities in Florida and particularly in New College.” The Foundation is particularly concerned in preserving the humanities, O’Shea notes.

“They’re concerned with the way the relentless focus on STEM drives out the humanities and arts, and they were kind of thrilled with the consortium.” As to what exactly New College and the consortium at large will do with the funding, that hasn’t yet been determined. However, Professor of Theater Nova Myhill and Professor of Philosophy April Flakne have been appointed as directors of the overall program. The project is called “New College: Connecting the Arts and Humanities on Florida’s Creative Coast” and cites three goals: 1. To elevate New College’s capacity to contribute to public discourse on humanities and arts in our region, 2. To build sustainable relations with local arts organizations, 3. To establish sustainable academic connections with local colleges that comprise the College Consortium on the Creative Coast (the C4 group). Faculty have submitted proposals to use grant money for existing projects, like New Music New College and the Public Archeology Lab.

New College, leftist politics and the third party Our school’s role in the Bush-Gore election and questions for 2016

BY PARIESA YOUNG When George W. Bush was elected president for his first term, many current thesis students were in kindergarten (first-years might have been toddlers), yet his presidency shaped, and ultimately determined, the outcomes of the most significant political events in our world. While current students were just growing up, a generation of Novo Collegians were facing one of the most important elections of their young lives. Today, we find ourselves in the same position, both mentally, considering the ramifications of our one vote, and physically, on the campus of New College of Florida, in a highly contested swing state. On Tuesday, Oct. 11, former Democratic presidential nominee and climate change activist Al Gore told Floridians that he is “Exhibit A” to

prove that every vote matters in this year’s election. Gore’s loss in 2000, which ultimately came down to a mere 537 votes, has been attributed to Green Party candidate Ralph Nader who siphoned a chunk of votes that some say would have pushed Gore over the edge and into the presidency. Does New College have a “thing” for third parties? “Leftist politics in particular has always had a performative element at New College,” alum Jeb Lund (‘97), former political writer for The Guardian, Rolling Stone and Gawker, said in a Facebook message. “Nothing cements your revolutionary bona fides like loudly condemning the insufficient progressivism of your peers, even if it means staking out increasingly thinner territory within an already marginalized wing of the party.”

Most alumni contacted estimated that between half and two-thirds of students in 2000 supported Nader. The significant zeal for the Green Party candidate on the New College campus has led professors and alumni to consider the impact of our small campus on a national, even global scale. This perception is present even in those who voted for Nader and now feel responsible for a Bush presidency. “It was my first election, I absentee voted, and Gore was ahead when I voted,” Sara Beall said on Facebook. “Yes, I was one of the Nader votes and I learned a very hard lesson that year. Voting your conscious is not as simple as it seems because it could lead to exactly the outcome you wanted least.” While Nader support was strong, many students disagreed; tensions were predictably high on campus in the time before the vote.

“I had friends get in knock down drag outs about whether to vote conscience or strategy,” alum Lauren Payne said over Facebook. “It was very divisive.” “The only real brawl I ever witnessed at New College was on Election Night 2000 between a Gore voter and a Nader voter,” alum Karen Halperin Cyphers said. A banner reading “GORE COST NADER THE WIN” was hung in Hamilton “Ham” Center after the election. “I still remember when CNN called Florida for Gore and then went back and gave it to Bush, how shocked and ashamed I felt,” alum Jen Robbins (‘92) said. “For years I didn’t even want to admit that I voted for Nader in that election because I felt so culpable.”