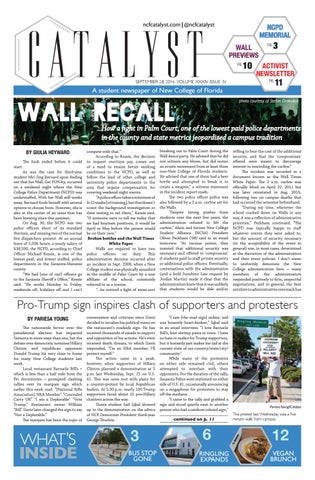 How a fight in Palm Court, one of the lowest paid police departments in the county and state metrics jeopardized a campus tradition BY GIULIA HEYWARD The funk ended before it could start. As was the case for third-year student Mei Jing Bernard upon finding out that her Wall, Get FUN-ky, occurred on a weekend night where the New College Police Department (NCPD) was understaffed. With her Wall still weeks away, Bernard finds herself with several options to choose from. However, she is also at the center of an issue that has been brewing since this summer. On Aug. 30, the NCPD was two police officers short of its standard thirteen, and missing two of the normal five dispatchers present. At an annual leave of 3,036 hours, a yearly salary of $38,500, the NCPD, according to Chief Officer Michael Kessie, is one of the lowest paid, and lowest staffed, police departments in the Sarasota-Manatee county. “We had [one of our] officers go to the Sarasota Sheriff’s Office,” Kessie said. “He works Monday to Friday, weekends off, holidays off and I can’t

compete with that.” According to Kessie, the decision to request overtime pay comes out of a need to ensure better working conditions to the NCPD, as well as follow the lead of other college and university police departments in the area that require compensation for covering weekend night events. “A police officer takes a minimum of 8-12 weeks [of training], but that doesn’t count the background investigation or their testing to vet them,” Kessie said. “If someone were to tell me today that we had fourteen positions, it would be April or May before the person would be on their own.” Broken bottles and the Wall Times White Paper Walls are required to have two police officers on duty. This administrative decision occurred after an incident in Sept. 2008, when a New College student was physically assaulted in the middle of Palm Court by a non affiliate of the school, commonly referred to as a townie. “...he noticed a fight of some sort

breaking out in Palm Court during the Wall dance party. He advised that he did not witness any blows, but did notice an erratic movement from at least three non-New College of Florida students. He advised that one of them had a beer bottle and attempted to break it to create a weapon,” a witness statement in the incident report reads. The two police officer policy was also followed by a 2 a.m. curfew set for the Walls. “Despite strong pushes from students over the next few years, the administration refused to lift the curfew,” Alum and former New College Student Alliance (NCSA) President Oliver Peckham (‘08) said in an email interview. “At various points, they insisted that additional security was necessary and offered to ‘compromise’ if students paid to staff private security or additional police officers. Eventually, conversations with the administration (and a bold Sunshine Law request by Jordan Martin) made it clear that the administration knew that it was unlikely that students would be able and/or

willing to bear the cost of the additional security, and that the ‘compromises’ offered were meant to discourage interest in rescinding the curfew.” The incident was recorded in a document known as the Wall Times White Paper. The 2 a.m. curfew was officially lifted on April 22, 2011 but was later reinstated in Aug. 2015, following two on campus deaths that had occurred the semester beforehand. “During my time, whenever the school cracked down on Walls in any way, it was a reflection of administrative priorities,” Peckham continued. “The NCPD was typically happy to staff whatever events they were asked to, but the amount of security necessary (or the acceptability of the event in general) was, in most cases, determined at the discretion of the administration and their event policies. I don’t mean to uniformly demonize the New College administration here -- many members of the administration responded positively to firm, respectful negotiations, and in general, the best antidote to administrative overreach has

Pro-Trump sign inspires clash of supporters and protesters BY PARIESA YOUNG The nationwide fervor over the presidential election has impacted Sarasota in more ways than one, but the debate over democratic nominee Hillary Clinton and republican opponent Donald Trump hit very close to home for many New College students last week. Local restaurant Barnacle Bill’s – which is less than a half mile from the Pei dormitories – prompted clashing rallies over its marquee sign which earlier this week read: “[National Rifle Association] NRA Member” “Concealed Carry OK” “I am a Deplorable” “Vote Trump.” Restaurant owner William “Bill” Davis later changed the sign to say “Not a Deplorable.” The marquee has been the topic of

conversation and criticism since Davis decided to vocalize his political views on the restaurant’s roadside sign. He has received thousands of emails in support and opposition of his actions. He’s even received death threats, to which Davis responded, “I’m an NRA member, I’ll protect myself.” The action came to a peak, however, when supporters of Hillary Clinton planned a demonstration at 5 p.m. last Wednesday, Sept. 21 on U.S. 41. This was soon met with plans for a counter-protest by local Republican leaders. At 5:30 p.m. nearly 100 Trump supporters faced about 15 pro-Hillary chanters across the way. Thesis student Saif Iqbal showed up to the demonstration on the advice of NCF Democrats President third-year George Thurlow.

“I saw [the road sign] online, and was honestly heart-broken,” Iqbal said in an email interview. “I love Barnacle Bill’s, best shrimp pasta in town. I have no hate or malice for Trump supporters, but it honestly just makes me sad at the current state of our country/state/city/ community.” While many of the protestors on either side remained civil, others attempted to interface with their opponents. For the duration of the rally, Sarasota Police were stationed on either side of U.S. 41, occasionally announcing on a megaphone for protesters to stay off the medians. “I came to the rally and grabbed a sign and stood quietly next to another person who had a rainbow colored sign,”

The protest last Wednesday was a five minute walk from campus.