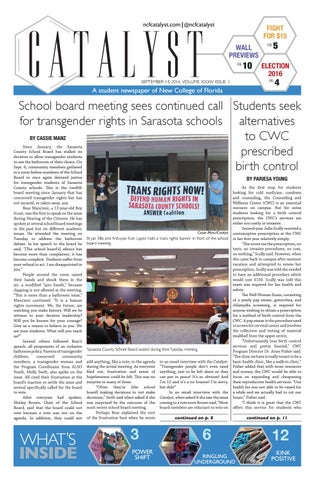 Since January, the Sarasota County School Board has stalled its decision to allow transgender students to use the bathroom of their choice. On Sept. 6, community members gathered in a room before members of the School Board to once again demand justice for transgender students of Sarasota County schools. This is the twelfth board meeting since January that has concerned transgender rights but has not secured, or taken away, any. Bear Mancinni, a 12-year-old Boy Scout, was the first to speak on the issue during Hearing of the Citizens. He has spoken at several school board meetings in the past but on different academic issues. He attended the meeting on Tuesday to address the bathroom debate. In his speech to the board he said, “[The school board’s] silence has become more than complacent; it has become complicit. Students suffer from your refusal to act. I am disappointed in you.” People around the room raised their hands and shook them in the air, a modified “jazz hands,” because clapping is not allowed at the meeting. “This is more than a bathroom issue,” Mancinni continued. “It is a human rights movement. We, the future, are watching you make history. Will we be witness to your decisive leadership? Will you be known for your courage? Give us a reason to believe in you. We are your students. What will you teach us?” Several others followed Bear’s speech, all proponents of an inclusive bathroom policy. Parents of transgender children, concerned community members, a transgender woman and the Program Coordinator from ALSO Youth, Molly Swift, also spoke on the issue. All cited their frustration at the board’s inaction to settle the issue and several specifically called for the board to vote. After everyone had spoken, Shirley Brown, Chair of the School Board, said that the board could not vote because a vote was not on the agenda. In addition, they could not

in an email interview with the Catalyst: “Transgender people don’t even need anything, just to be left alone so they can pee in peace! It’s so obvious! And I’m 12 and it’s a no brainer! I’m sorry, but duh!” In an email interview with the Catalyst, when asked if she saw the issue coming to a vote soon Brown said, “Most board members are reluctant to vote on

As the first stop for students looking for cold medicine, condoms and counseling, the Counseling and Wellness Center (CWC) is an essential resource on campus. But for some students looking for a birth control prescription, the CWC’s services are either too costly or invasive. Second-year Julia Scully received a contraceptive prescription at the CWC in her first year relatively simply. “She wrote me the prescription, no tests, no invasive procedures, no cost, no nothing,” Scully said. However, when she came back to campus after summer vacation and attempted to renew her prescription, Scully was told she needed to have an additional procedure which would cost $150. Scully was told this exam was required for her health and safety. The Well Woman Exam, consisting of a yearly pap smear, gonorrhea, and chlamydia screening, is required for anyone wishing to obtain a prescription for a method of birth control from the CWC. A pap smear is the procedure used to screen for cervical cancer and involves the collection and testing of material swabbed from the upper cervix. “Unfortunately [our birth control services are] pretty limited,” CWC Program Director Dr. Anne Fisher said. “The clinic we have is really meant to be a basic health clinic, like a walk-in clinic.” Fisher added that with more resources and money, the CWC would be able to focus on expanding and cheapening their reproductive health services. “Our health fee was not able to be raised for a while and we actually had to cut our hours,” Fisher said. “I think it is great that the CWC offers this service for students who

Bryan Ellis and first-year Evie Lopez hold a trans rights banner in front of the school board meeting.

Sarasota County School Board seated during their Tuesday meeting.

add anything, like a vote, to the agenda during the actual meeting. As everyone filed out, frustration and sense of hopelessness could be felt. This was no surprise to many of them. “Often they’re [the school board] making decisions to not make decisions,” Swift said when asked if she was surprised by the outcome of the most recent school board meeting. Perhaps Bear explained the root of the frustration best when he wrote